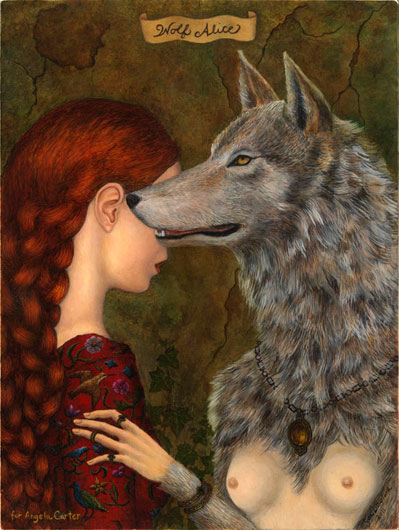 Historic Chicago surrealists Gertrude Abercrombie (1909–1977) and Julia Thecla (1896–1973) are tough acts to follow. They were not so much makers of weird paintings as tough, weird women who liked to paint. Only two small paintings by Abercrombie are included in this exhibition, but they’re enough to establish her as a master of economy, delivering a maximum of impact with an apparent minimum of effort—whereas the two small paintings by Thecla proclaim her a virtuoso of figurative design who seemed to have enjoyed complexity for its own sake. Contemporary surrealist Gina Litherland, who has been boldly paired with them in this exhibition, seems a bit tame by comparison. Her show has been titled “The Reason for the Unreason” to emphasize the painting of that name which depicts Don Quixote and is saturated with literary text. But seven of her ten oil paintings in this show seem to be explicitly self-referential, presenting a sweet, innocent girl-child or young woman who is comfortable with wolves and other wild things. It’s a theme that would probably play well in the fantasy literature targeted at young readers, carrying that well-worn but ever important lesson: “It’s okay to be different.” These have been executed on panels with the hyper-realistic, detailed intensity of late-medieval European painting. As the artist pursues a highly detailed finish, she tends to lose a feeling for the whole. This problem disappears, however, in the four works of pastel, ink and watercolor on paper that are also in this show.  She still is quite meticulous, but the less forgiving nature of those materials has forced her to execute more spontaneously, and the surfaces feel as bold and lively as some of the best pages from historic illuminated manuscripts. Untroubled by a disturbing past, and unconcerned about the future, she shares the daydream pleasures of self-contemplation in the forever present. (Chris Miller)

Through June 22 at Corbett vs. Dempsey, 1120 North Ashland, second floor.