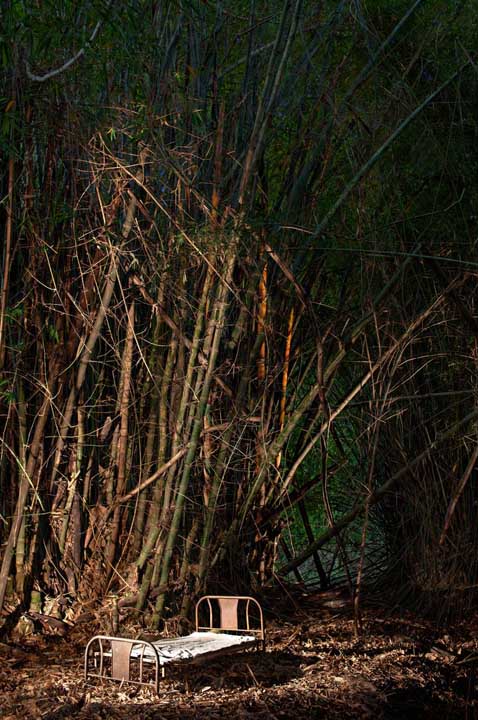 Photography lends itself to surrealism more than any other visual medium does, by virtue of its manifold possibilities for representing a scene. Argentinian photographer Pablo Soria does the trick of defamiliarizing the ordinary by shooting large-format, sharp, starkly illuminated nighttime color images taken under long exposure times, producing brilliant dreamlike studies of his native San Miguel de Tucuman. Sometimes Soria moves into the frame as the film remains exposed, so that he appears as a ghostly presence; but he is most successful and fixates our attention when he envelopes us in intimate woodland sites in which he places an empty bed or chair, disturbing sparkling pristine nature with some uncertain human artifact and purpose. A rude wooden bench sits on the rough brown ground at the very bottom of the frame as stalks of semi-tropical plants, some of them sere, tower above it into the impenetrable darkness. This is a place for nocturnal dwarves; no doubt, one of them—in his own mind—is the artist. 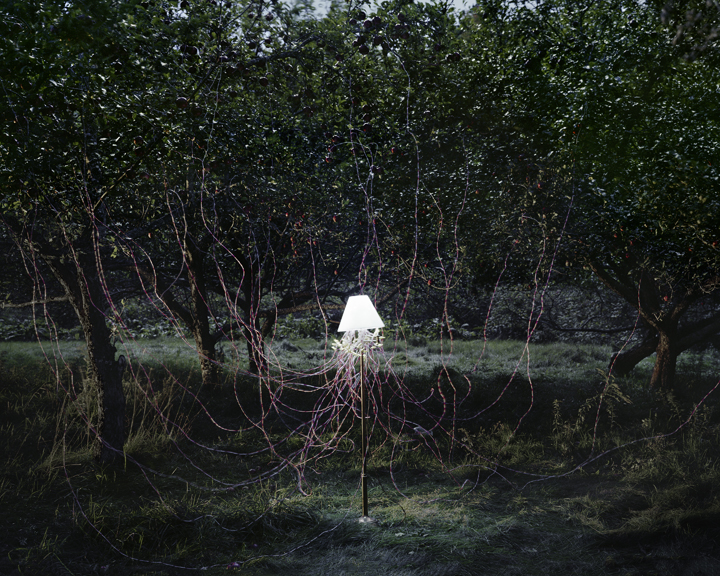 Using Soria’s same aesthetic of bright glossy color at night, Caleb Charland, who is stationed in Maine, adds multiple exposures to the long-exposure move, allowing him to create scenes even farther from the mundane than Soria has produced. Again we are in the woods at night, but this time it is a burning glowing electric lamp that graces the clearing, and Charland has entangled it in a skein of wires that look like tendrils that are sprouting from the surrounding trees. We get the sense that the wires are organs of a willful life, choking the lamp as they energize it and squeeze a spasm of intense light out of it in a dying gasp. For both Soria and Charland, nature strained through technology and contrivance swamps displaced culture but, of course, it is all culture, which is a lesson that befits a technological age. (Michael Weinstein)