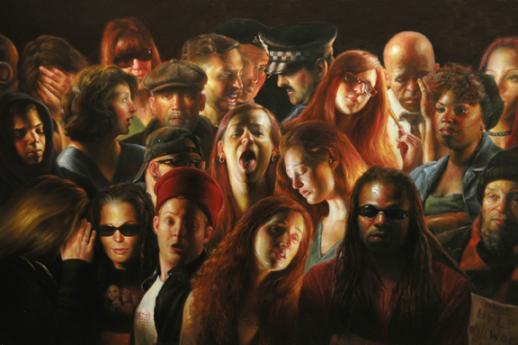 Bruno Surdo, “We the People”

Classical realism is so marginal to contemporary art, it’s a wonder that anyone devotes a career to its many technical challenges. Rather than deconstructing the languages of art or aiming for self-expression, it painstakingly builds a realistic illusion to concretize (as Ayn Rand once put it) important ideas about the human condition. The artist must master paint, design, choreography, stage direction and philosophy.

Which makes Bruno Surdo something of a trailblazer in that he has applied that range of skills to depicting life in Chicago—specifically the life of the energetic young people like you might find any day on a Brown Line El platform. Indeed, the pictorial stages on which he sets his scenes are as shallow and sometimes feel as long as El platforms, and all the characters, though side by side, are living in a world of their own. But he’s not an Impressionist, painting people as you might actually see them waiting for a train. Instead, he arranges them on his own stage, carefully adjusting the spotlights and presenting each as some specific aspect of humanity involved in the concept he’s developing.

His latest tour de force stretches over seventeen feet across a wall in Ann Nathan Gallery. Titled “Life,” it is an ambitious attempt to capture all that individualism and vitality. This “Life” is not about making, building or doing things—it’s about aggressively being yourself, just like so much mainstream Chicago art has been for the past fifty years. Unlike other Chicago art, his figures are not distorted, though they’re not especially handsome or beautiful, either. Nor are his figures cartoonish, though sometimes he’ll paint a realistic figure wearing a cartoon figure’s costume. He has established a kind of middle ground that owes as much to Chicago surrealism as it does to the direct lineage of the nineteenth-century French academy of which S.O.R.A., his recently shuttered atelier, was once a part.

The fleshy sensuality of Flemish painting is the most remarkable quality of Surdo’s work. He hasn’t worked it into a deep, swirling, cosmic order like Rubens did, but it’s intensely shallow, like the work of Jacob Jordaens. Often, the figures feel like studio-model studies that have been randomly thrown together as in a sketchbook. But sometimes there does seem to be an intriguing idea behind it all, as in his depiction of “Hope” as a burly young man trying to avoid the crowd that offers him various kinds of flowers. I’m not sure that a brilliant insight will follow from a rigorous investigation of all its iconographic details, but it does feel like life in a corner of Chicago: vibrant, ambitious, self centered and a bit cold. (Chris Miller)