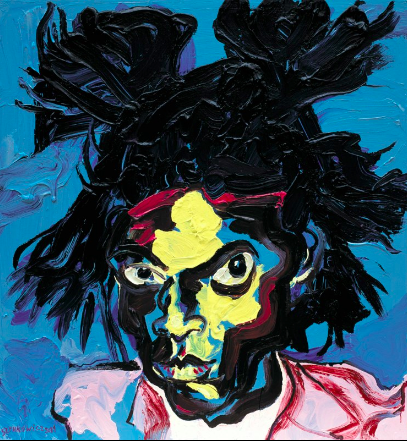 Large, bold, expressive paintings of celebrities are the stuff of summer art fairs. But as these many pairs of large eyes stare out from the wall, the subject is more often the modern world they’re confronting rather than any recognizable celebrity. There’s the ordinary daily horror before the terrified eyes of Andy Warhol, the divine mystery before the eyes of Isaac Bashevis Singer and all the human foibles seen by the cool, analytical eyes of Woody Allen, Saul Bellow and Philip Roth. Not all of these famous people are Jewish men, but like the painter himself nearly half of them are. These are the famous writers, painters and politicians with whom the Belgian painter Charles Szymkowicz apparently most identifies. He also has a fascination with African Americans like Jimi Hendrix, Jean Michel Basquiat, Martin Luther King and especially Barack Obama.   There are five paintings of the current president; and four times he is looking away, presumably at that rat’s nest of American politics that has furrowed his brow in frustration. Only four women have been depicted, and the theme of martyrdom seems to join at least three of them together (Anne Frank, Marilyn Monroe and Frida Kahlo). Taken altogether, the show is like an afternoon spent discussing modern history and culture with a middle-aged European male, the son of a Holocaust survivor. It’s all about our modern, secular world but building it seems far less important than bearing witness to it. These heroes are the nagging truth tellers, not the mythmakers or titans of commerce and industry. Though you might look elsewhere for great insights, some of these paintings really come together, joining sensual, syrupy, spontaneous brushwork with strong design and sharply defined character. Where they fail, it’s probably because the artist has prioritized character and sometimes just couldn’t fit a good painting around it. (Chris Miller)