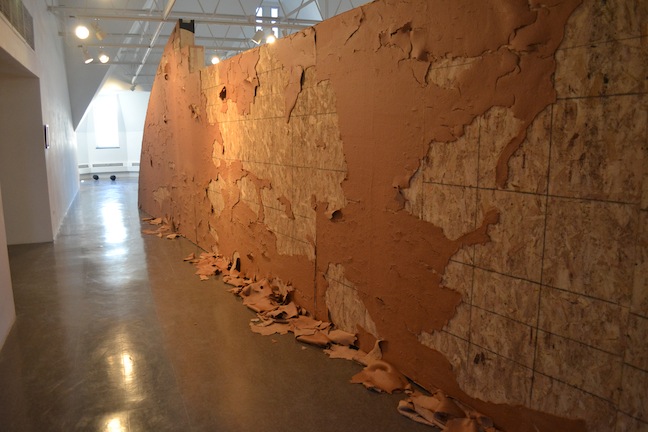 In a multimedia exhibition of both two- and three-dimensional works, the one most important to William Pope.L’s “Forlesen” is actually the fourth; time, in all its idiosyncrasies, brutalities and inevitabilities, lays at the exhibition’s heart.

“There’s nothing that necessarily ties the episodes together except time,” said Pope.L in regard to Gene Wolfe, the science fiction author who wrote the novella “Forlesen” (1974), and from that one observation the seemingly disparate pieces of Pope.L’s exhibition take on a (somewhat) coherent form.

Pope.L’s decision to purposefully not re-read the story prior to beginning his work—therefore relying upon the residue of memory—firmly grounds “Forlesen” in the fourth dimension at its conception. Perhaps most important, if least obvious, is the foundational aspect allotted to the passage of time, and the obfuscation that ensues.

Less esoteric are the works that deal with decay; the sloughing of ketchup (foodstuff that once reminded Pope.L of hardship and fame, but is now a romantic reminiscence) and joint compound scales from “Curtain” present the viewer with an empirical example of time’s ravages, as do the black helium balloons of “Ellipsis.” Aloft when fresh, they inevitably hang from the rafters like narcoleptic ravens, or lay shriveled upon the ground like dreams deferred. Even the room-dominating sculpture “Quarter Shape (penis)” can be seen as an allegory for atrophy; what do men fear losing most as caducity approaches? Combine the phallus with the withered balloons, and a nightmarish image akin to Updike’s Ben Turnbull takes shape.

It takes a moment, upon being presented with the shedding condiment wall, desiccated balloon corpses and guttural fucking (from a video work) to acclimate and appreciate what Pope.L has put together. Give it time. (B. David Zarley)

Through June 23 at the Renaissance Society, University of Chicago, 5811 South Ellis