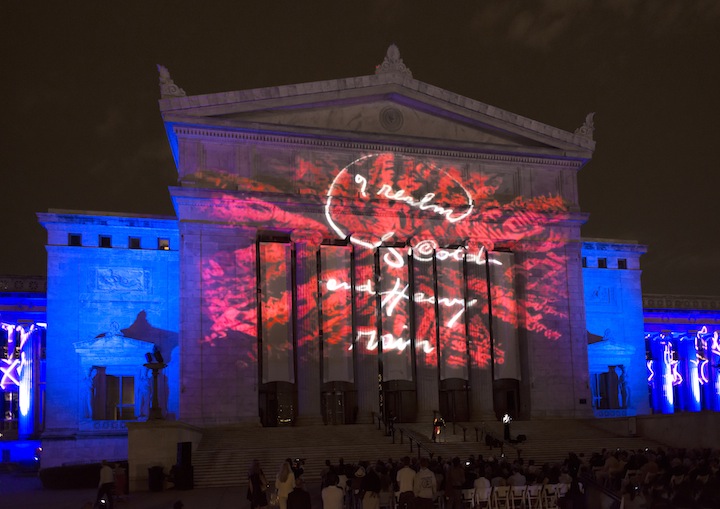 One’s appreciation for Robert Pinsky’s poem “ABC” (his sophomoric work in which every word is in alphabetic order, and which is as bromidic as it sounds) may be considered a precursor for the enjoyment of Marco Nereo Rotelli’s “Divina Natura.” It was the first piece of poetry read at the one-night installation/performance on June 24 outside the Field Museum, and was only by a slight margin the worst aspect of the Italian Cultural Institute of Chicago’s celebration of poetry and art.

A myriad of other poems fared better, although translating some from their native tongues (which included Arabic, Italian and French) seemed a touch gauche; letting them stand alone, relying upon the euphonic properties of their natural states, would have seemed a better celebration of their poetic nature. The score by Adrian Leverkuhn and Thomas Masters was the highlight of the evening, encapsulating sounds coppery and warm as blood and minimal, Cimmerian, and luxurious as Kanye West, while soprano Karolina Dvorakova’s voice danced along the architecture in a way that the visuals above her could only aspire to. All of this was enhanced by some dramatically, timely assists from Aeolus, who rattled the trees and blew purposefully or fell to doldrums in dramatic rhythm.

Which leaves Rotelli’s projection as the most disappointing aspect of the show, sans Pinsky. This was not for lack of scale; the north face of the Field was effectively bathed in Rotelli’s vision. Unfortunately, said vision aspired to an aesthetic somewhere between the glossy motion graphics of an hour-long History Channel special (scenes from “Inferno” adrift as if unmoored; the incandescent letters of Dante, askew and enlarged, set adrift in a sea of crimson) and the opening of “The Venture Bros,” with checkerboard-colored palm prints crawling upon a field of fingerprint. The lexical aspect of Rotelli’s work resembled long-exposure flashlight calligraphy or lipstick on a mirror, with the words coiling and looping into pleasingly voluptuous—if illegible—forms more pulchritudinous then their background.

Rotelli’s show seemed designed for a flat surface; it collided with the columns and crevices of the Field’s face, constantly combating rather than enhancing the lines and spaces, a fight it was destined to lose. The futility of this struggle was further enhanced by the looming presence of a far cleaner marriage of architecture, light, scale and speech in the distance: the massive and clear missive of “Lets (sic) Go Hawks.” Poetry deserved better. (B. David Zarley)