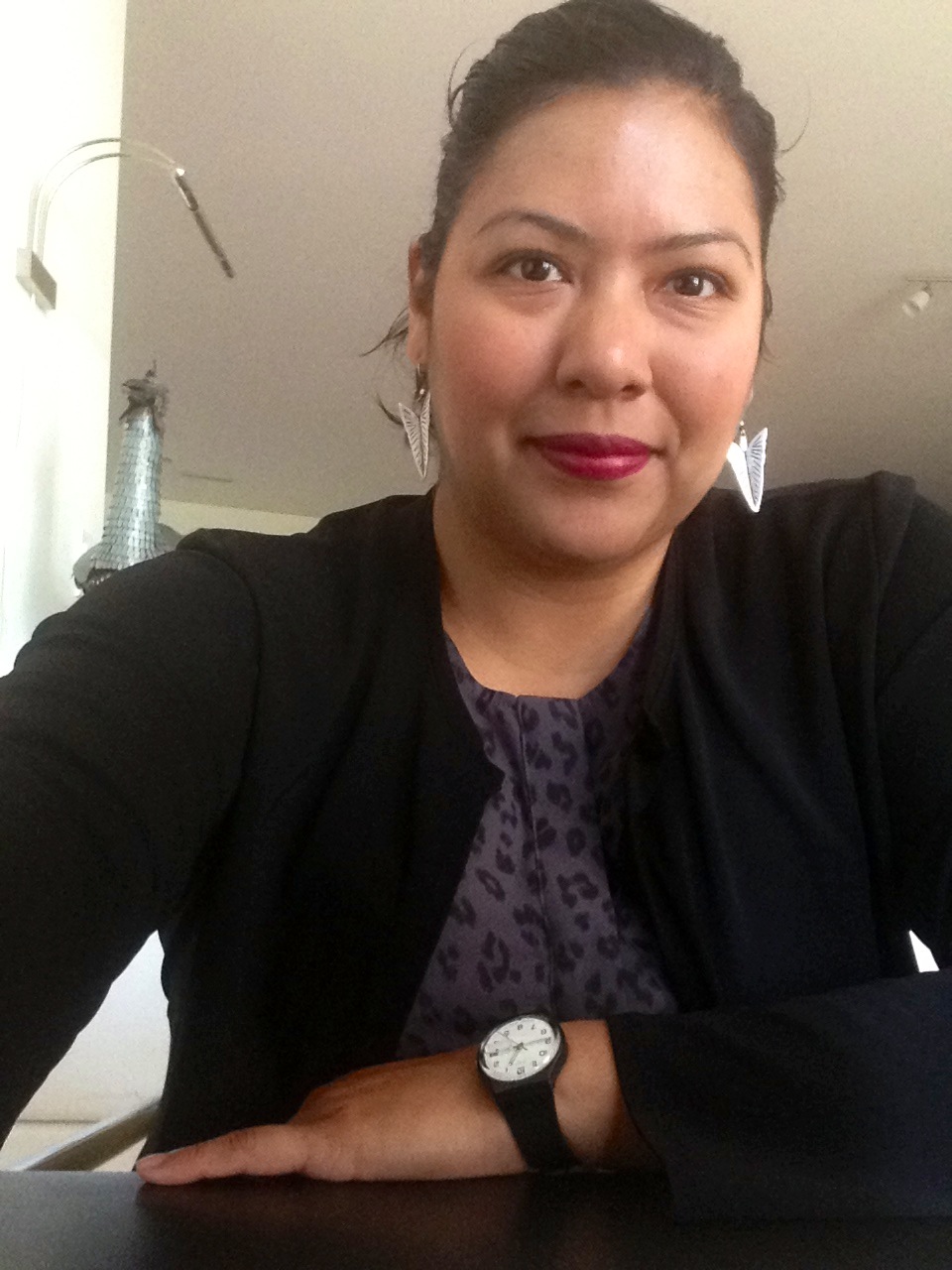 Lauren Pacheco wants to boost Chicago’s street-art scene, but city policy has her up against the wall.

Chicago has a reputation as a Mecca of public art, but official public art campaigns tend to grow only on the new construction of libraries, police stations and senior centers, and rehabbed CTA stations. Meanwhile, long stretches of derelict railroad and viaduct walls cut through communities. People call this blight.

Lauren Pacheco drives around Pilsen looking for heavily tagged walls and studies gang territory heat maps to scout locations for new street murals. “Put a mural up in that area and, in some cases, it immediately stops the gang tags,” says Pacheco. “Most of the time, murals are respected.”

Pacheco is the assistant to Alderman Danny Solis of the 25th Ward, which includes Pilsen, Chinatown, Tri-Taylor, Heart of Chicago, Little Italy and portions of the West Loop and South Loop. With Alderman Solis, Pacheco developed a plan to boost the production of legally sanctioned street art and community murals, called the Art in Public Places Community Arts Initiative (AiPP). Alderman Solis and Pacheco have been very successful, commissioning sixty murals in just two years.

Restoration of historic neighborhood murals is an important part of AiPP, but it’s not the only concern. Pacheco also wants to create a place where legitimate urban street murals can thrive. Her taste favors a contemporary genre influenced more by comic books, graffiti and abstract painting than traditional Latino motifs, which are strongly represented in the area. Pacheco says that “the visual voice [of contemporary artists] is as important as a traditional mural maker.” The demand is high for quality works, and all eyes are on the murals in what Pacheco calls a “creatively tension filled” community.

As a home base, Pilsen works well for Pacheco because it is “an already art-rich community.” She worries that Pilsen’s residents view her as an outsider, imposing art upon people who already know a great deal about it, but Pacheco’s family is from Pilsen, and she co-runs the Chicago Urban Art Society, a nonprofit contemporary art venue, with her brother, Peter Kepha, in the Cermak Road Creative Industry District, also known as the Spice Barrel District, on the border of Pilsen and Chinatown. 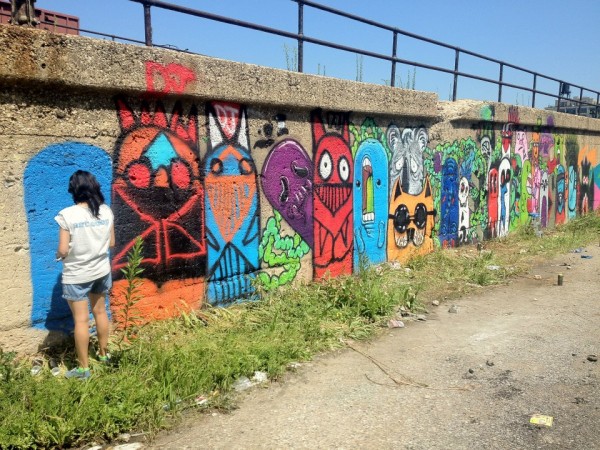 Yollocalli Arts Reach, of the National Museum of Mexican Art, 16th and Laflin

The murals tend to provoke a reaction in viewers, as good contemporary art should. A ten-month-old mural by the Belgian artist ROA, at 16th and Ashland, continues to be divisive. It depicts a giant disemboweled opossum. Just last week, the Reader named the mural the “best public artwork” and DNAinfo Chicago ran the headline, “Pilsen Possum Mural Still Raising a Stink.” (The mural was commissioned with the help of Pawn Works, a curatorial partner Pacheco often collaborates with to bring in international artists to paint in Chicago. Other curatorial partners include the National Museum of Mexican Art, Elevarte Community Studio, Yollocalli Youth Arts Reach, and Mujeres Latinas en Accion.)

Pacheco is a whiz at getting a solid, professional, striking mural up on a wall, quick and for cheap. In 2012 alone, the mural initiative produced thirty-two new works for less than $20,000. “People ask me how the hell I do it,” says Pacheco. “You can really spread that money,” she says, “while paying the artist and assistants and supplying materials,” because artists tend to be resourceful with their materials.

To date, all of the AiPP murals have been privately funded. Murals are one of a few ward improvements for which aldermen must seek private, not city, funds. As such, Alderman Solis has contributed $18,000 from his personal election fund for public art, and Pacheco has courted local businesses and community groups to subsidize new murals.

“I’m out here fundraising like a nut,” said Pacheco, standing on the sidewalk at 16th and Blue Island, on a sunny Saturday, overseeing the creation of a new mural. The area looked rough and bleak, as if a gutter had been magnified to the size of a city intersection. Rusted train bridges (with tagged train cars) crossed overhead, behind pocked concrete walls. It is easy to mistake the entrance of a 231-unit condo building on this corner as a warehouse, given its featureless façade, but EVER’s mural was fully funded by the condo’s residents, via their monthly association dues. The condo’s association requested mural beautification of their industrial front yard, and asked their former alderman for nearly six years to help facilitate. (The surrounding walls are property of the railroads.) Finally, after recent redistricting, the intersection and the condos became part of the 25th Ward, and a priority on Pacheco’s mural list. 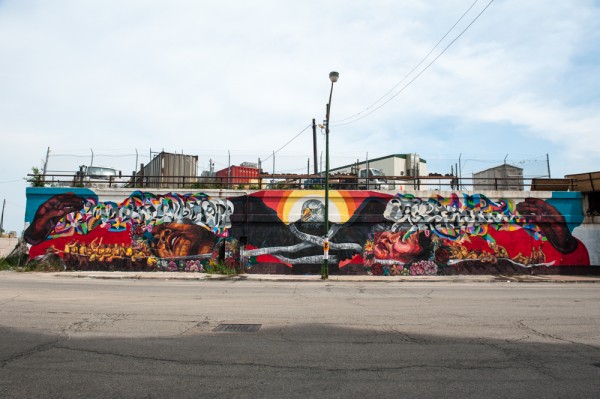 As the noon sun rose, the artist EVER brushed a shaft of blue paint out of the eye socket of a giant, floating head. The artist worked without a master sketch or drawing, and he seemed to change direction about colors and content intuitively. This kind of loose, freeform working method would not fly had the mural been commissioned by the city.

EVER, who lives in Buenos Aires, was traveling through the U.S. painting street murals. He was finishing a project in Cleveland and on his way to New York City when the wall became available in Chicago. Pacheco emailed him information on the Pilsen community and the Chicago mural movement prior to his weeklong visit. The condo residents did not get to choose which artist would paint the walls they see every day, but they did request that nothing with religious or anti-gentrification imagery be depicted.

Well-known on the international street-art circuit, EVER no longer has to operate under a street name, but he retains it; street cred opens doors in all art worlds. His finished wall painting is in the style of a traditional mural, with symbols of populist political activism and grassroots social justice, such as silhouetted crowds, an imposing eagle, a graphic, blaring sun and the word “libertad.” It is more a stylized pastiche than a pointed political statement, but it looks urgent and powerful, if not colorful.

EVER is used to being flown to cities around the world to paint on “permission walls” in mural festivals. In the U.S., there are large-scale mural festivals like Wynwood Walls in Miami, Living Walls in Atlanta, and Open Walls in Baltimore, but in Chicago the murals are made to order, one hurdle at a time.

We are on the cusp of a major breakthrough in city-funded murals. The door to city-funded public art was unlocked when Alderman Joe Moore of the 49th Ward (including Rogers Park) made a bold move to allow his ward’s constituents to vote on infrastructural improvements. Each year, every alderman receives money from the city for local infrastructure upgrades, such as improved street lighting, fixed potholes, ADA-compliant sidewalks, new alleys and garbage cans. In 2012, $1.32 million was allocated to each ward for the needs of this Aldermanic Menu Program. The “Menu money” has always been spent at the discretion of each alderman—until Alderman Moore initiated participatory budgeting in his ward. In fact, he was the first legislator in the U.S. to allow his constituents to vote democratically on neighborhood improvements. In 2011, Moore’s constituents voted to spend more than $100,000 on twenty new street murals. 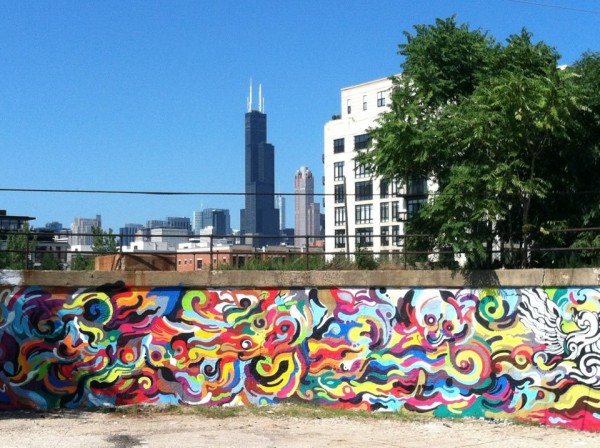 The desire for publicly funded public art, by Alderman Moore’s constituents, has changed everything. Alderman Solis sees the potential in this, and although his ward does not use participatory budgeting, Alderman Solis intends to use some of his annual Menu money for public art, perhaps for two-to-three times more than his original investment, says Pacheco. He hopes this will eliminate the need for private fundraising for public murals, but Alderman Solis’ office is having trouble getting the funds disbursed from the City. According to Pacheco, “Alderman Solis has asked for the support of the mayor’s office in helping to establish policy.” She adds that “the mayor’s office is supportive of the alderman and the public art projects.” Along with Alderman Moore, Alderman Solis “is driving the much needed conversation about increasing public art in our communities as a beautification and anti-graffiti tool,” says Pacheco.

For now, Alderman Solis and Pacheco’s mural projects are on hold unless they can be privately funded, which is not ideal, given Alderman Moore’s precedent of using Menu money for public art. It is a “bureaucratic mess,” says Pacheco. She says that the city designates murals as “ephemera,” and the Menu funds, which are a Capital Improvement Program, are supposed to fund infrastructure only. (By contrast, the city somehow finds a way to fund a $4.5 million annual budget for ephemeral decorative flowers.) “I think public art can also be considered infrastructure,” says Pacheco.

Alderman Solis and Pacheco want a formalized and simplified process for designating Menu money for public art. To do this, Pacheco is going to “kick it up to the mayor,” meaning that Alderman Solis is asking for the mayor’s staff to intervene and review policy. If streamlined, the revised policy could result in more public art opportunities for all of Chicago’s wards.

Off the clock, Pacheco volunteers to help other aldermen build public art and mural portfolios for their wards. When a neighborhood group contacts the Department of Cultural Affairs and Special Events (DCASE) to get a mural painted, Nathan Mason, curator of the city’s public art program, sometimes refers them to Pacheco. She helps to provide guidance or insight in preparing outdoor walls for murals and selecting artist proposals. Mason says that DCASE has a goal to do more neighborhood projects. “We are working on a strategy,” says Mason. Pacheco’s strategy for community murals would be practicable right now, if she can get the city to work with her.