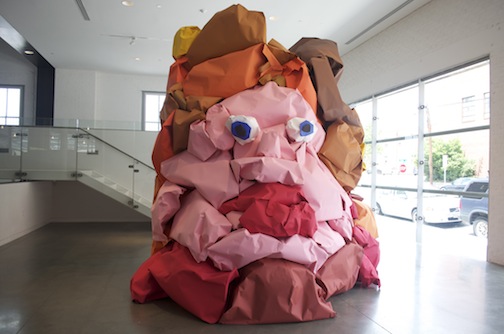 Originally from Puerto Rico, Lerma divides his time among Chicago, New York and Spain, three places he currently calls home. Lerma teaches at the School of the Art Institute of Chicago as an adjunct professor while he is here, but otherwise he always seems to be on the go. When I spoke with him a couple of days prior to his exhibition opening, he had just returned from London after having attended another of his openings at the Saatchi Gallery.

For an artist who travels such a great deal, Lerma is particularly interested in the spatial politics of places and the layered implications that they contain. A significant part of his art practice involves unearthing and using what already exists in a space as a source of inspiration. One of his larger works at the MCA, titled “Portrait of Norman and John,” is entirely made from carpet. The installation spreads across the ground. Viewers are to experience the carpet portraits by walking on them, just like “an insect on a sketchbook,” says Lerma.

The portraits are made to reference two of the founding members of the bank, BMO Harris, sponsoring Lerma’s exhibition. By doing so he makes a significant connection with the conditions of the space the work is temporarily occupying and, in a sense, allows it to dictate the content of the work. “I want the territory to follow the map rather than the other way round,” says Lerma, using this philosophy of reversal as a generative force while also creating a site-specific experience. “Many of the works in this show would not make sense outside of the space of the museum,” he says. 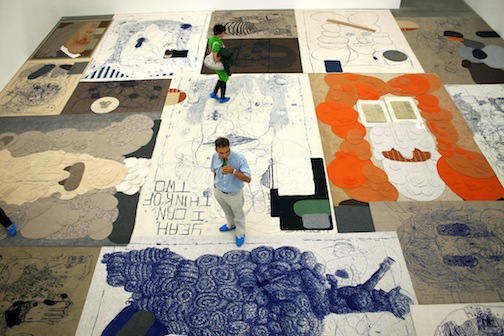 Along with the carpet installation, two very large busts made of colored paper, titled “Marjorie looks at Marianne” and “Marianne looks at Marjorie,” are on view, and comment on the museum’s inner workings, specifically its wealthy trustees. The giant faces stand near the staff elevators, facing one another like guardians. They nod strongly to traditional art patronage and address the politics of the museum in a tongue-in-cheek way. Lerma describes it as a “friendly aesthetic.”

“It doesn’t take itself too seriously,” Lerma says of his art. He strives to maintain a balance among the elements of politics, humor and aesthetic ingenuity. (Shreya Sethi)