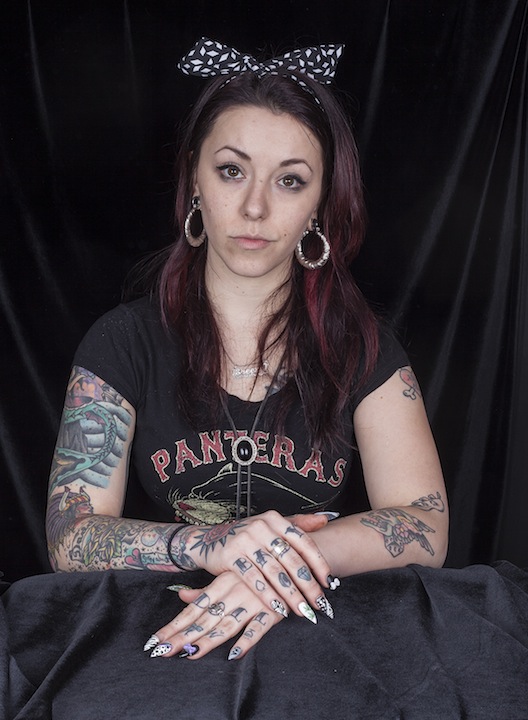 Fascinated by the practice of adorning the human nail in the most elaborate, intricate, textured and glistening designs, Helen Maurene Cooper began by taking color photographic studies of these objects of body art at close range in lush settings, creating images of sumptuous eye candy. Now she has ventured into a nail salon, shooting sensitive formal portraits of its female patrons, showing off their decorations to be sure, but much more allowing them to express their personalities, indeed, so much so that the individuals dominate the images at the expense of their nails—a clear case of life trumping art. In one instance—the show’s banner image—Cooper brings together her early and present series in a portrait of “The Rocker,” a young, raven-haired fashionista inscribed with flowing tattoos, including “BABY DOLL” across her knuckles, in which her nails—each one strikingly different—are the culmination of her visual transfiguration. Look closely and you will see that one of her nails bears an exquisite, soft green depiction of marijuana leaves. She has taken hipness to the max and has shown where Cooper’s whole project leads—to unabashed and unadulterated pleasure. (Michael Weinstein)

Through September 29 at the City Gallery, 806 North Michigan