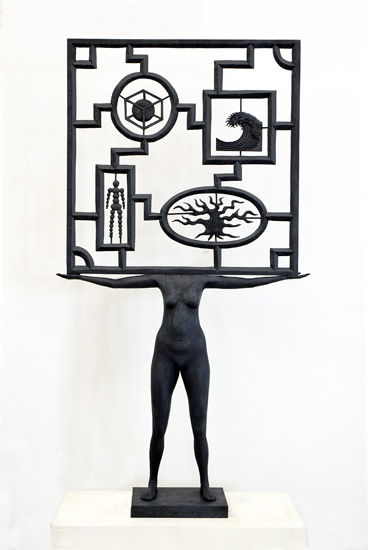 John Buck is a benign Midwestern baby-boomer who remains forever fascinated by mind-expanding psychedelica, while holding firm to the practical values of craftsmanship, hard work and reliability in a lifelong devotion to woodworking. As a graphic artist, his woodcuts, displayed as either rubbings or original panels, are in the R. Crumb school of crackpot Americana, bemused by our tireless national fascination with all things religious and mechanical. As a sculptor, he hit upon the idea of carving headless female nudes whose stiff, slender bodies are topped off with a fabulous calligraphic eruption of twists, turns and arcane symbols. That curious, out-sized, wooden ornamentation recalls an artifact once used by remote tribes to connect their modest village to the amazing cosmos that surrounded it, like something displayed at the Field Museum. Buck’s mind-blown virgin goddesses, in multiple variations, might perform a similar function for ordinary Midwesterners who grew up in the 1950s and 1960s. Predictably, his son, Hunter, has gone in the opposite direction, pulling all of his energy tightly inward instead of showering it like a Roman candle. 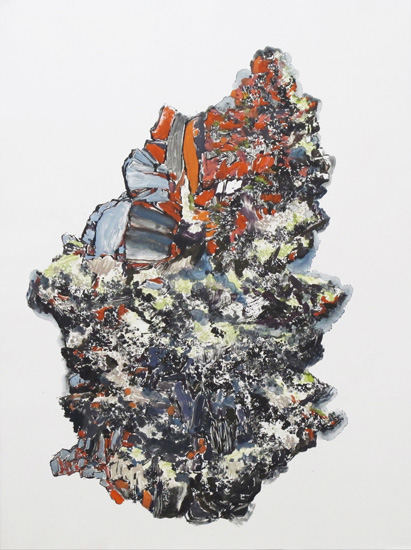 The thrill of the sixties was gone when he grew up, but both of his parents are sophisticated and successful artists (Hunter’s mother is the sculptor Deborah Butterfield). Immersed in our multicultural art world, Hunter seems to have been attracted by an East Asian aesthetic, and he addresses the basic forces of nature with lithographs of rock and water that resemble details extracted from historic Chinese landscape painting. When he designs a page, he starts at the center which holds him so tightly he never gets to the edges, while his father starts with a pictorial box and then crams it so full he has to cut out perforations to relieve the pressure. Together, these two skillful artists, father and son, present a snapshot of productive life in a late-twentieth-century secular Midwestern  family, and their work should appeal to those who share those typically practical, though open-minded, values—but neither one has achieved an aesthetic intensity that might transcend that time and place. (Chris Miller)