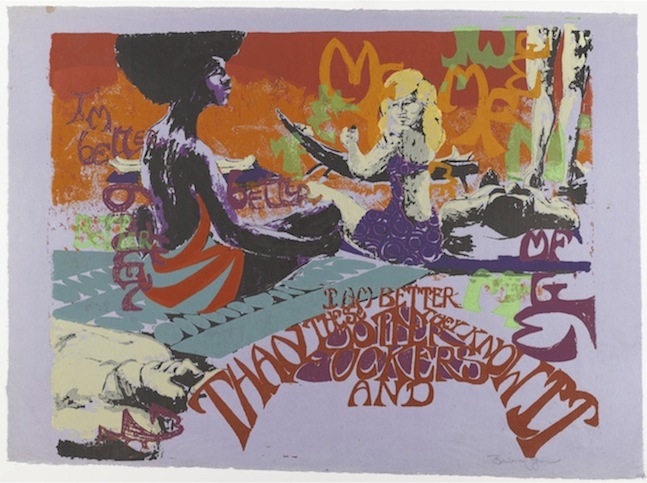 Barbara Jones-Hogu, “I’m Better Than These Motherfuckers,” circa 1970

“Let a new earth rise,” wrote Margaret Walker in For My People. “Let another world be born. Let a bloody peace be written in the sky.” The closing stanza of this rousing militant poem provided the title for Barbara Jones-Hogu’s 1971 silkscreen series, “Rise and Take Control.” Two of these images, a symmetrical semi-abstract triple portrait fractured with flowing acid-rock text, appear in the Logan Center for the Arts’ retrospective of the fierce, vivid work of AfriCOBRA (African Commune of Bad Relevant Artists), a group of Black Power-era Chicago artists who came together to represent and promote a resistant Afrocentric message through (and beyond) visual art. Jones-Hogu’s “I’m Better Than These Motherfuckers” is an even more direct statement, and an even more densely and exquisitely printed piece, centering on a black woman sitting on the beach among melanin-deficient figures seemingly dissolving in the sunlight. 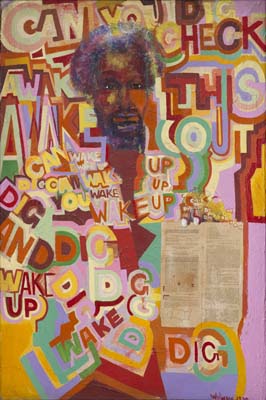 Two pieces in the exhibit reference then-contemporary politics specifically: Gerald Williams’ 1969 painting “Wake Up” depicts a man holding a copy of the King Alfred Plan, a rumored plot to round up black nationalists into concentration camps, and Jeff Donaldson’s 1970 painting “J.D. McClain’s Day in Court,” representing a hostage drama at a black activist’s trial that resulted in four deaths and the arrest of Angela Davis, to whom guns used in the event were registered. And, not putting too fine a point on it, the lovely fabric bandolier in Jae Jarrell’s “Revolutionary Suit,” which appeared in the 1970 AfriCOBRA show at the Studio Museum in Harlem, holds wooden pegs to represent bullets, housed in cloth shells of many colors.

Angela Davis is now a retired professor, but her fellow activist Assata Shakur remains on the FBI’s list of most wanted terrorists. As jubilant and warm as the Logan Center opening was, full of live music and conviviality and striking period garb, too much nostalgia risks putting a sepia haze over a moment of crisis and opportunity. As with Black Panther Minister of Culture Emory Douglas’ 2008 show at the MoCA in L.A., bold graphic sensibilities can overpower the boldness of a provocation that was intended to reach beyond aesthetics and affect history.

Rebecca Zorach’s curating this month at the Logan Center includes screenings and talks, as well as in-depth wall text, intended to dispel cobwebs and connect the rage of an earlier generation with the ongoing realities their cultural work attempted to address.  Entitled “Philosophy,” this is the second in a series of three local AfriCOBRA retrospective exhibitions, the third of which, “Art and Impact,” will open at the DuSable Museum on July 26. (Bert Stabler)

Through August 11 at the Logan Center for the Arts, University of Chicago, 915 East 6oth Street