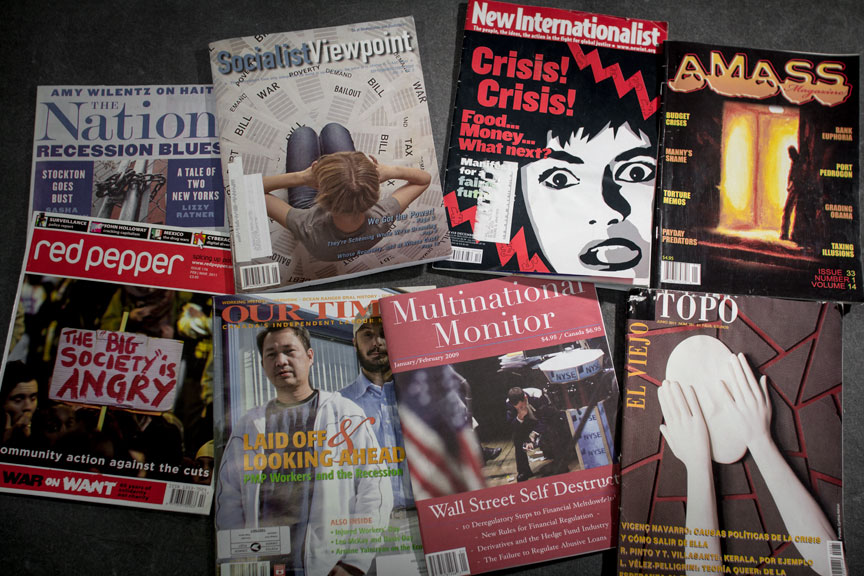 As conservative ideologues have always bemoaned “the attack” on this or that hallowed ideal, a perennial leftist theme has been “the crisis.” Last summer, local activist writer and artist Daniel Tucker participated in a group residency at the Alternative Press Center, a library of left-leaning books and periodicals located in the In These Times magazine office and gallery space at 2040 North Milwaukee. The goal was to document images of crisis in the center’s 300 available periodicals, which stretched from 2007 to 2012. A searchable web archive is an ultimate goal, but so far Tucker has organized his 750 images into thirty-five binders, organized iconographically by recurrent motifs such as “Pyramids,” “Globes,” “Banks” and “Greenspan.” Laser prints focusing in on many of the documented illustrations, tacked to the wall and propped on tables, take up the main gallery space, along with mounted photos of grouped publications and a shelf containing the “Crisis Image Archive” binders. Corollary hallway displays include samples of poetry responding to the archive, and political cartoons, photos and covers culled from the history of In These Times.

Following indexical works by Marcel Duchamp, and Walter Benjamin’s historiography, the avant-garde archive blossomed via Fluxus and Conceptual Art as an anti-formalist “analytical” art form, a microscope that Tucker has now turned on to radical journalism itself. Tucker describes the exhibit as “anthropological” rather than aesthetic, appropriate to its utilitarian content; he seems fully aware that, despite the best efforts of REI, Velcro will never be seductive. As stoic as it appears, this show is an interrogation of the left from the left, a form of self-critique that the left has often modeled (Communist purges being a notably overzealous example)—thereby making Tucker’s exercise a most enjoyable meta-gesture. (Bert Stabler)

Through September 15 at Art In These Times Gallery, 2040 North Milwaukee. The next special event is a design charrette with a local graphic designer on how to visually represent crisis on Saturday, August 24, at 2pm.