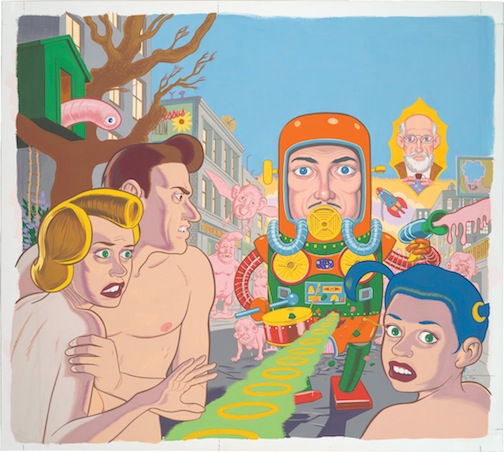 Comic-book illustration is a form that rewards intimacy; it is best unpacked, page by page, panel by panel, in the comforting embrace of a reader. While the Daniel Clowes survey “Modern Cartoonist” may obfuscate its understanding of this knowledge a bit, what with its lofted, haze-gray reproductions tucked flush to the ceiling, hovering, encircling eyes of Argus, and the monolithic murals of Chicago, resembling the flanks of a battleship, bookending the pleasingly nacreous exhibition space, this is still an exhibition best observed in its minutiae.

Original drawings from Clowes’ seminal comics—including “Ghost World,” “The Death-Ray” and “Art School Confidential,” all of which his incongruous anthology “Eightball” originally begot—are the exhibition’s main drawing point. Scaled up and rough, these illustrations still bear their embryonic markings, with spectral pencils—like the light from distant quasars—echoing the past in-between inks black as space, while cut and pasted custard text-corrections attest to Clowes’ protracted struggles with dialogue. Seeing the lead lines and corrective scabs is akin to visiting a Body Worlds display; we tacitly understand these foundational aspects lie at the heart of Clowes’ work, but to see the actual bones and viscera on display is to achieve a more intimate appreciation not only for the works themselves, but the process behind them. 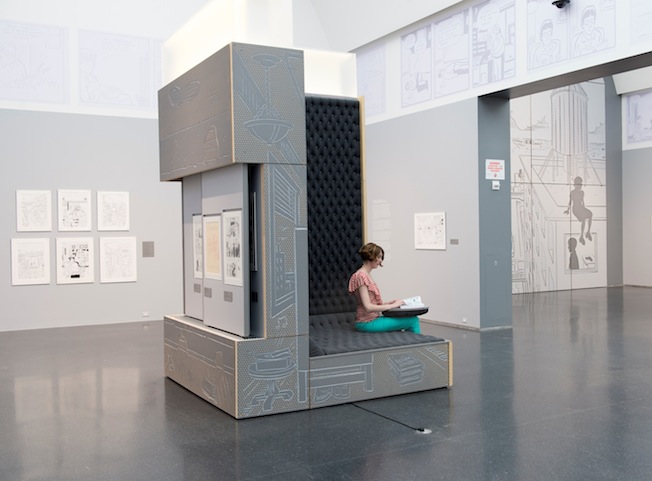 The works are oftentimes grotesque: characters with hydrocephalic heads, prodigious teeth and racking anxiety—sweat-drops-cum-tadpoles swimming down brows—with views of the Uncanny Valley reflected in their eyes; these are Clowes’ typical denizens, although he is capable of gentler, more enthralling visages (like a portrait of Hunter S. Thompson for Fast Company).

Copies of Clowes’ books lay about, ready for purveyance, so that his final product may be experienced as it should be, even if curling up with them in the middle of a gallery space may at best be an approximate facsimile of the medium’s prime route of administration, and the juxtaposition of these comparatively tiny finished products with the less charming behemoths that make up their environment is striking.

But it is in neither the panels nor the panes that the true pleasure of “Modern Cartoonist” lays. That would be in the floral print skirt of Dear Dusty, the germinal pedals awaiting their GO green coloring, with one ghostly flower leaving an echo of itself beneath Dusty’s hand; the pleasure is in seeing its soft grey curves. (B. David Zarley)

Through October 13 at the Museum of Contemporary Art, 220 East Chicago