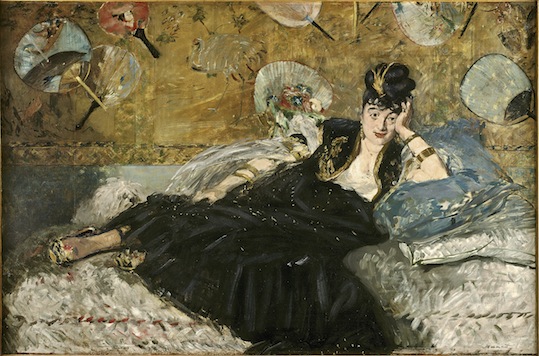 Americans, who come to museums in hoodies and jeans, may have trouble imagining the complicated restrictive class-based codes that determined dress in the nineteenth-century. The Art Institute of Chicago’s new exhibition, “Impression, Fashion, and Modernity,” extends the ideas of T. J. Clark’s influential book “The Painting of Modern Life” (1999), which examined Impressionism as the intersection of radical physical, social and technological changes in Parisian life. The exhibition focuses on the emergence of a public culture and the resultant flowering of couture in Paris, as painters from the 1860s to the mid-1880s recorded it, when fashion was a sign that encompassed the full scope of modernity. Paris was, as the critic Walter Benjamin retrospectively called it in 1939, the “capital of the nineteenth century.”

“Modernity is the transitory, the fugitive, the contingent, the half of art of which the other half is the eternal and the immutable,” wrote Charles Baudelaire in 1863. So, while art preserved some call to represent an ideal, the fluctuations of fashion would have been parallel to the fugitive play of light for painters; however, the clothes on display are nowhere near as ephemeral as the disposable outfits we pick up at H&M or Target.

These exquisitely tailored clothes represented real wealth; the language of taste and distinction for the upper-middle class at the dawn of commodity fetishism and invidious emulation was nothing like our manic patterns of consumption. Seeing and being seen had social consequences and people did not have as many other distractions, so they could observe one another’s dress carefully. 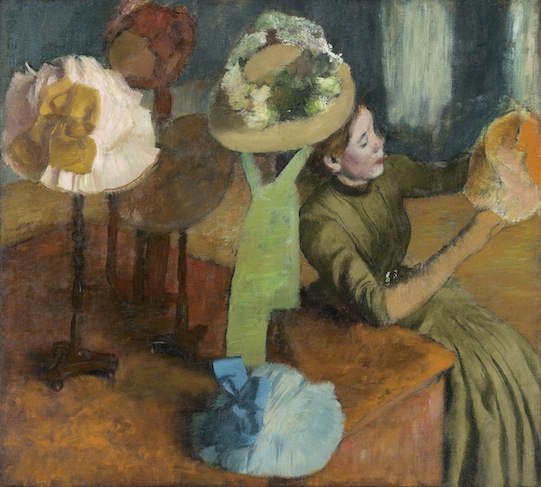 The market portrayed by Edgar Degas’ “Portraits at the Stock Exchange” (1878-79) had not yet become a global experience. Seamstresses and milliners, also captured by Eva Gonzales and Degas, would have been local, while the sewing machine and synthetic dyes were changing the market. People were formal in the 1860s, even the painters. Manet and the poet Baudelaire were notable dandies. Baudelaire’s famous Haitian mistress, Jeanne Duval, hardly visible in the middle of an enormous white confection, appears in a work by Edouard Manet on loan from Budapest. Henri Fantin-Latour recorded Manet’s impeccable style in a luminous portrait. Rooms full of La Mode Illustrée fashion plates, photographic cartes de visite and other artifacts give evidence to the burgeoning print culture that helped to disseminate the new styles and demonstrate the difference between the painter’s interpretations of fashionable Parisiennes and advertising. Exchanging cartes de visites—small two-by-three-inch photographs, sold eight to a sheet—launched cartomania, and friends could trade tiny photographs of themselves in their finest.

Even if you hold yourself above the frivolity of fashion—I can’t decide between the blue silk walking dress or the brown silk damask by Worth, myself—getting Manet, Claude Monet, James Tissot and Gustave Courbet together in a room is revealing. Some of Tissot’s lavishly dressed female subjects gaze out of his highly worked surfaces (at the spectator, owner or the painter?) with a discreet come-hither look, while Courbet’s languishing picnickers are voluptuous and sensual, their clothes awry. 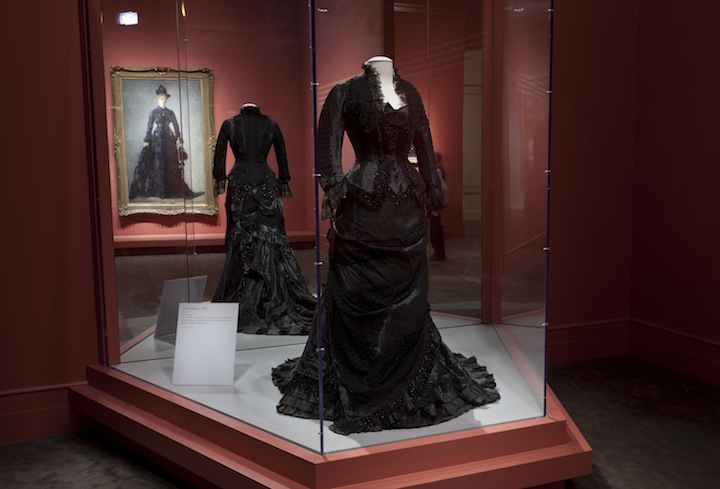 Manet’s “The Parisienne” of 1875, a woman out and about in an exquisite black walking dress seems like an apparition in gesture and space, a perfect example of Mallarme’s direction to “paint, not the thing, but the effect it produces.” A room of large paintings of people outdoors provides context for the absent “Luncheon on the Grass”—we learn that people generally dressed to the nines for fresh-air amusements. Several works by Berthe Morisot, Eva Gonzales and Mary Cassatt—her much examined by feminist art historians “In the Loge” of 1878 is on display—round out variations of Realism and Impressionism.

Cassatt paints a female subject actively engaged in looking, a once masculine prerogative; really, she is in a network of glances including ours. While some of the women seemed to be overcome by the tedium of sitting around all dressed up, as in Morisot’s “The Sisters” (1869) especially. They are more than just objects for the display of wealth. The rise of fashion did signal the entrance of the bourgeois woman into public space, and material consumption provided new possibilities for class mobility.

“Impressionism, Fashion, and Modernity” is an exhibition whose goal is to provide context, to reveal the interrelationships among artworks and the urban experience, but if you are looking for the petite bourgeoisie or the proletariat, they had been sent by the Baron Haussmann’s redevelopment of Paris on the radial plan, to the industrial outskirts. Pissarro, Seurat and Monet painted scenes of proletarian pleasure and work at Argenteuil, but T.J. Clark felt that overall the Impressionists failed to “find a way to picture class adequately.” 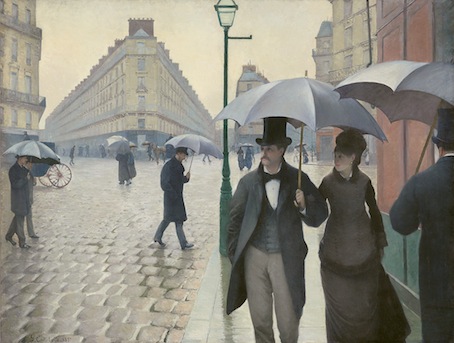 The AIC’s major Caillebotte painting, “Paris Street; Rainy Day,” depicts in part Haussmann’s apartment blocks. The new Paris provided an elegant backdrop for pleasure, flannerie and shopping, but one of the key reasons for the redevelopment was military. A stunning Tissot portrays a British cavalryman with waxed moustache and a cigarette in repose, but there is not much evidence in this exhibition of the Franco-Prussian war or a popular uprising in 1871. There is a lithograph by Manet, from 1871, depicting summary executions of the Communards in front of their barricades. If you are wondering what participants in the Commune (a more utopian, sustained and violent version of Occupy) were wearing, you will have to look to the work of lesser-known artists.

“Impressionism, Fashion, and Modernity” shows at the Art Institute of Chicago, 111 South Michigan, through September 22.