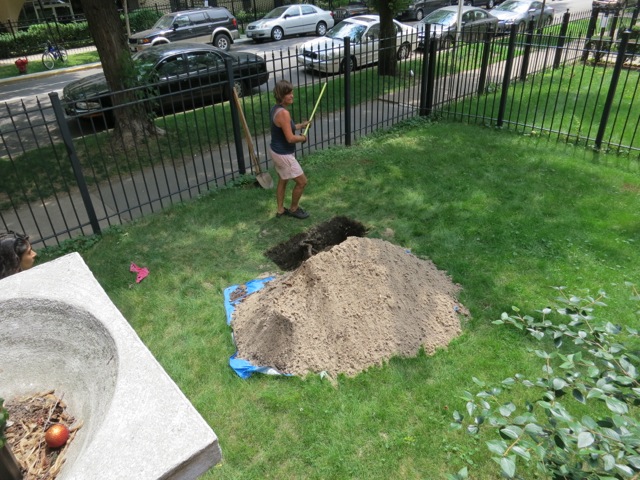 With a pair of powerful arms, Nance Klehm forced a shovel into the ground, scooped out the earth, and placed it in a neat mound. As an environmental artist, ecologist and landscaper, digging holes comes naturally to Klehm.

“We don’t have a sense of how deep our earth is,” says Klehm. “We have this way of horizontally gridding off our landscape as if it was flat and non-dimensional,” she says about urban construction. Klehm’s projects are inspired by her frustration with the current conditions of environment destruction and the wasteful systems of city life.

Although Klehm’s practice is quite diverse and she always seems to have a new project on the horizon, the motive guiding all of her work is singular: re-situating people in place. Her most recent work, titled “Earth Cavities/Soil Horizons,” does so in a direct and sensual way. An interactive work, the earth cavity in Edgewater is literally open for people to crawl into and participate in an alternative experience of the city. The hole, deep, but barely big enough for a single person, is meant to “mitigate the noise of the city” in its soft dampness, and to give us a sense of the rich world that exists below our feet.

The hole can be found in the front yard of a dilapidated, yet impressive house located in the heart of Edgewater. The place is 6018North, a house-turned-alternative-art-venue, owned and run by Tricia Van Eck, former curator at the MCA. It’s the perfect space for hosting Klehm’s project, as Van Eck has a similar focus on community, sustainability and participation.

Klehm’s own home in Little Village, which I was lucky to get a tour of, is completely run according to Klehm’s philosophy of living. Entering her backyard and passing through a path of tall overgrown plants made me feel as though I had exited the city, and entered some rural garden. “Every plant growing back there has either medicinal or consumptive value,” she says while plucking red currants from a nearby branch. “This is just the way I chose to live.”

After visiting her home, I was really able to understand that her “projects” are merely framing devices for a lifestyle and holistic view of the world. She employs creative methods to direct our attention to the environment and “re-enliven a tired dialogue.” Her life and practice are one and the same thing. Some of Klehm’s other works involve urban foraging tours, “dry” waterless toilets used to make compost, as well as designs for sustainable systems for homes. (Shreya Sethi)