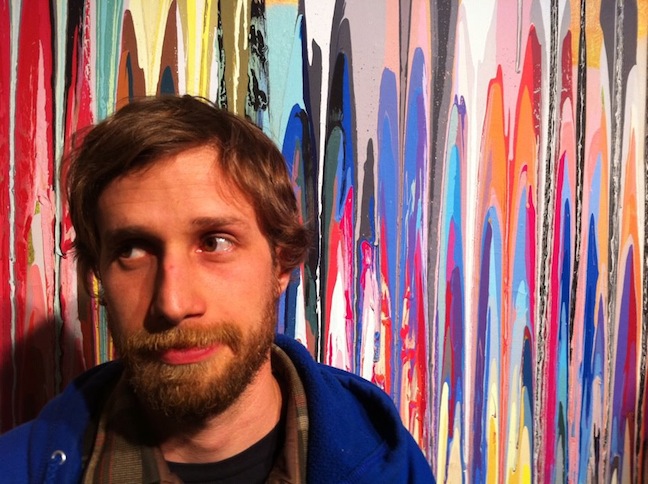 Morgan Sims grew up in a world of straight lines. As a teen he laid orderly rows of pipe with his father. His first exposure to art was his mother’s quilts, works of abstract blocking in careful grids. At the University of Wisconsin-Madison, Sims trained as a printmaker and found satisfaction in the process. “I really enjoy the steps in printmaking. The process is fun, I like that it’s hands-on.”

While he still makes prints, Sims is starting to become known for his rich, pixelated paintings and neon sculptures. He has been in well-received group shows at Heaven Gallery, and his tent-like neon sculpture “Palisade” was a standout at the MDW Fair last year. At Bert Green Fine Art, Sims is having his first solo show in three years. 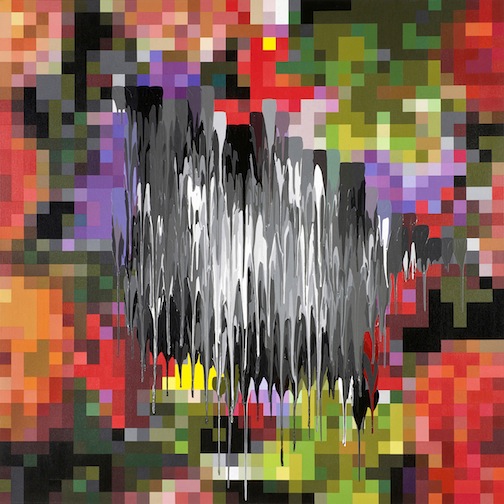 His affinity for lines continues in his current work. “Printing has informed my painting and neon work. I use a lot of grids, and straight lines.” Lines are typically seen as units of definition. They mark the parameters of a thing; once something is explicitly delineated, it is complete. Sims doesn’t want to be complete. He wants to evolve. “I’m afflicted with wanting my stuff to change.”

Sims’ artwork pushes what a line is capable of. “Cascade” is a series of neon sections leaned up against a wall at varying angles. Viewed from the side, the rigid lines become a graceful curve. “Gumby” uses block imaging to distort a familiar Gumby and Pokey almost beyond recognition. In Sims’ hands, lines confuse the world instead of clarifying it.

Sims, like many artists, wrestles with conflicting ideas about art. Can work be accessible and artistically ingenuous? Can art that is rooted in the past still do something new? These questions can paralyze, or, per Sims, they can be fuel for creative fire. Answering those questions defines boundaries, but Sims doesn’t work in finality. 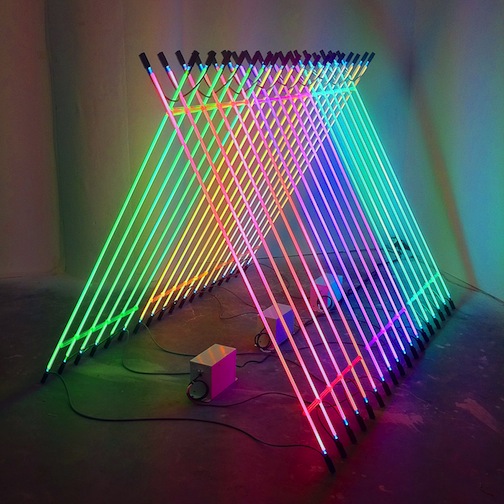 He talked about one of his favorite artists, James Turrell, and Turrell’s massive, ongoing land art project, “Roden Crater.” “You know, he had a retrospective of his career, and people are saying [Roden Crater] is like his ‘magnum opus.’ But what if it’s not? What if it’s just another big thing?” There won’t be a magnum opus for Sims, just a series of bigger and more ambitious projects. He wouldn’t allow himself to be boxed in by lines like that. (Meredith Wilson)