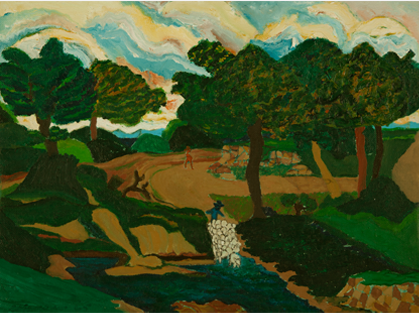 In 1971, Samuel and Blanche Koffler, originally from New York, began a charitable foundation to collect contemporary Chicago art. A board of five administrators—including a painter, a sculptor, an art historian, a critic and museum director—selected the acquisitions, many of which were donated to the Smithsonian Museum about ten years later. Last fall, ninety-five additional artworks were donated to the recently built  DePaul Art Museum, fifteen of which have now been selected for temporary display.

Much of this collection was built by experts, so the personal taste of the Kofflers remains elusive; but, it’s quite likely that they selected the two small panels by Robert Louis Thompson (1937-1966), since the African-American artist from Louisville never lived in Chicago. Ironically, these small narrative scenes are the best reason to visit this exhibition. Thompson was something of a wunderkind who burst upon the New York gallery world at the age of twenty-one with the same instantaneous success that Picasso had enjoyed in Paris. He seems to have had an immediate understanding of how narrative has been, and can be, interwoven with eye-catching design. His early death was a tragedy. 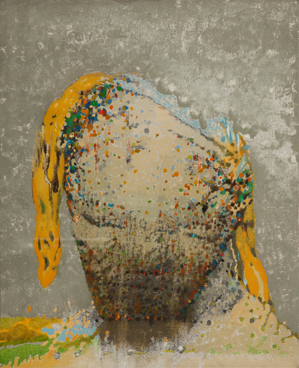 Another good reason to visit the show are the four works by Irving Petlin (born 1934), who left Chicago after graduating from the Art Institute more than fifty years ago, and has not been shown here much ever since. Petlin is represented by two abstract paintings and two self-portraits. Since eleven of his works were included in the entire donation, including two portraits of Blanche Koffler, we may assume that the Kofflers seriously admired his work. He seems to have had a restless spirit that would try things out—do them well—and then move on. And, judging by his self-portraits, he was as puzzled by himself as he was by the rest of the world.

Several better-known Chicago names are also included: Seymour Rosofsky, June Leaf, Ellen Lanyon and Richard Hunt, offering a slice of the Chicago art world of the 1970s. It was a world already marked by the defiant self-expression that has characterized it ever since. (Chris Miller)

Through September 1 at the DePaul Art Museum, 935 West Fullerton