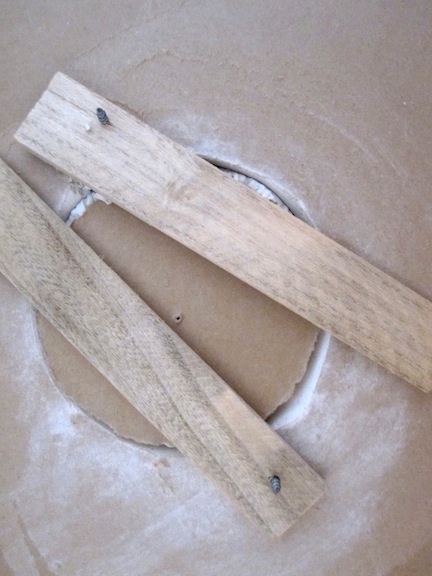 “Rehearsal Attire,” now on view at Slow, is a good-spirited summer haunting. The four artists in the exhibition have contributed works that reexamine some previous aspect of their own practices, in some cases directly deconstructing or recreating artworks.

In Meg Duguid’s “Produced By, Hole for Shaking Hands,” the artist has hacked apart a wall in which she had previously cut a glory hole intended for hand-shaking at the gallery last year. Only the small pieces of drywall where the former work had been patched and plugged remain. The wall’s remnants have been packed into black suitcases, also on view. By excavating the architecture of the exhibition space, Duguid calls attention to the complicity of conventions of display in the presentation of any artwork in a gallery setting by dredging the secrets and histories buried within the walls of Slow. 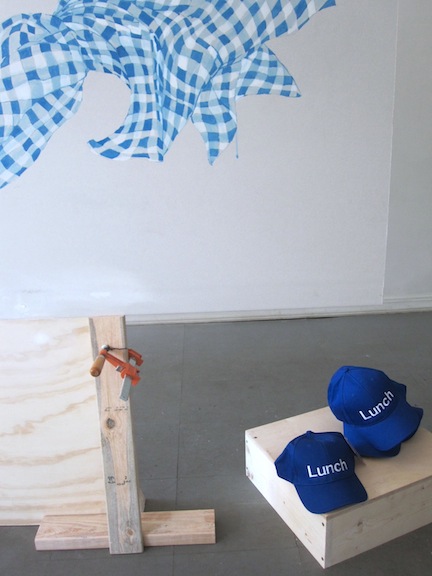 Charles Fogarty’s “Studio Lunch” is a tromp l’oeil tumble of a checkered blue picnic blanket that recreates a painting on a wall in the artist’s studio, this time on a freestanding structure that quotes the drywall and wood construction revealed by Duguid in the building itself. A stack of ball caps embroidered with the word “LUNCH” sit at the base of the painting. Fogarty emblazons his provisional construction site with signs of leisure—a mash-up of work and play, not unlike Slow itself, attached as it is to a living space directly behind it. If Duguid’s project teases new material out of her own and the gallery’s history, Fogarty’s is propositional—like a model of a gallery on view inside a gallery.

With the space everywhere suspended between acts of deconstruction and their opposite, Andreas Fischer and Mindy Rose Schwartz display more self-contained works that look inward to their own making. Fischer’s small paintings that blaze with hot color temperatures and shiny, sweaty surfaces are hung at intervals around the room. Meanwhile, Schwartz’s beaming sculptures, while compelling and exquisitely crafted, appear out of place in an exhibition that buzzes with hearty dialogue among the rest of the works and the venue itself.

Fischer and Schwartz’s inclusions are unnecessarily burdened with the “re-do” as a theme, which is better served by site-responsiveness. For Duguid to cut away all of a wall except the spot she’d previously incised, and for Fogarty to paint on a freestanding structure rather than a wall affixed into his studio’s architecture, is to evidence that history-building is not unidirectional. Revisions and variations set the original artwork and ideas off in different directions at once, crisscrossing through time and space and inviting viewers to pick their own adventure. (Matt Morris)