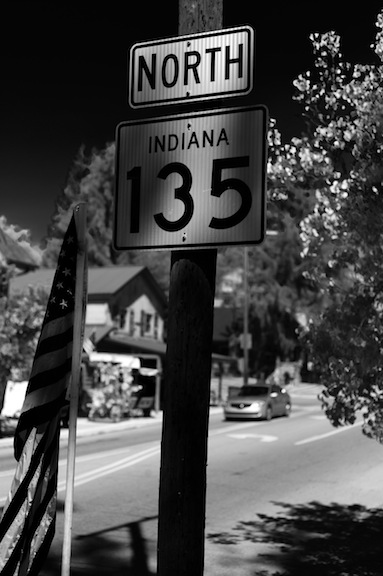 An illuminated road sign at night—Indiana 35—fronting the deserted street heading into nowhere, a single car parked against anyone’s house, the last vestige of our uncertain way that narrows into the unknown; that says it all for Scottish photographer Simon Gosling’s take on our existence. Classical modern foreshortened perspective is everything for Gosling, who uses its possibilities to give us a sense that there are possibilities beyond our obstinate, yet incomplete foreground, leaving a space for imagination that the photographer does not fill. Gosling seizes upon corridors in which tiny figures making their way into the unknown evoke a frisson, or stands of trees or skyscrapers signal a rebirth. Gosling is wise to shoot mostly in black and white, and to emphasize the darker tones, both of which freight his images with a mystery that does not have the edge of film noir, but, instead, provokes a more disturbing straight-on-uncertainty; Gosling is an existentialist—we are always at Indiana 35 at night, on our way to some incalculable somewhere. (Michael Weinstein)