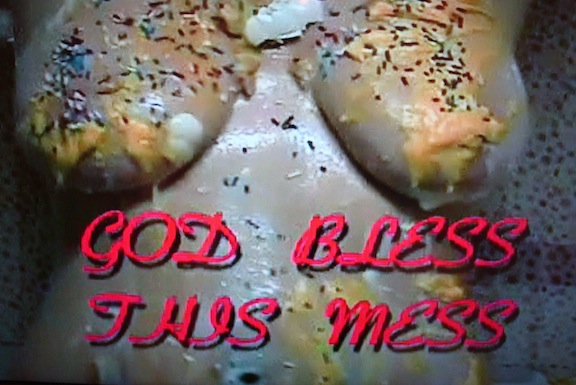 The purpose of Antonin Artaud’s “theater of cruelty,” he wrote, was not “a question of bringing metaphysical ideas directly onto the stage, but of creating what you might call temptations, indraughts of air around these ideas.”

Such frothy titillation overflows, often literally, in the teeming group exhibition “Slippery Slope,” now at Woman Made Gallery, with works that include a video of semi-recognizable foods being dumped on a young woman’s ample chest (by Vanessa Harris), a ceramic wall piece with a profusion of gesticulating leech-like fingers (by Daniel Luedtke), and a contraption to turn colored spit into a collaborative painting (by Ruby Thorkelson).

The quiet, simple, darkly uncanny presence of Conley-Fonda’s bodies runs up against the contained chaos of a solo exhibit by “Slippery Slope” curator Robin Hustle, an untitled presentation of works about incarceration. One wall and a leaning plank are covered with printed-out Yelp! reviews of various correctional facilities, which make for absorbing reading, and a projection shows Hustle herself, who is currently enrolled in a nursing program, demonstrating on herself force-feeding techniques similar to those being carried out on hunger strikers at Gitmo. A terrarium of compost, some hot-pink screenprints, and various arrangements of found metal shells decorate but don’t distract from this sinister finale to a theatrical gallery visit. (Bert Stabler)

Through August 22 at Woman Made Gallery, 685 North Milwaukee