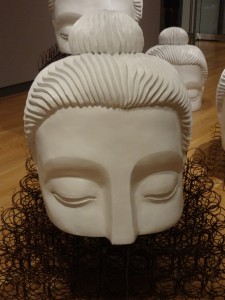 A bashed Buddha is not a pretty sight. Nor is it expected—vessels of peace, supposedly pointing the way toward the cessation of suffering, Buddha statues do not seem a target for the violent and pained. In Pilsen, however, a Buddha was brained, leaving a gaping hole in its otherwise fulfilled head.

You might ask what a Buddha head was doing planted in the middle of Pilsen in the first place. Or, if you’ve seen Buddha heads around the city, what they’ve been doing on your sidewalks and in your parks. The answer comes not from any specific spiritual program, but from the Ten Thousand Ripples project, a public art campaign that aims to curb the tide of hate, raise the tide of love, and wring public art out of Chicago’s grime and grit.

Ten Thousand Ripples (TTR) is a partnership between Changing Worlds, an NGO that promotes understanding through the arts, and Indira Johnson, the project’s lead artist. The plan consists of a series of one-hundred Buddhas planted across Chicago, from Evanston to South Chicago. The hundredth statue was installed in Little Village in June. Johnson, a transplant from India, based the project off of a question: “Could we make an offering [to the public] that asks for peace?”

In spite of the overriding imagery, Johnson does not see the Buddhas as emissaries of any particular faith, but rather as symbols with the power to shock. While a dove “wouldn’t surprise you or stop you in your tracks,” the unexpected and even bizarre presence of a Buddha might do just that, provoking contemplation and compassion.

The installations, which weigh in at 300 pounds a head, “emerge” from the ground. The Buddha is cut off at the nose and cheek level, with its serene eyes downcast toward the Earth. With enough cranium to appear Buddhic, but not enough skull to give it mortal form, the statues “are growing out of the ground, just like we are growing,” as Johnson puts it.

The idea for the statues sprouted largely out of Johnson’s background. As an Indian (although not Buddhist), she grew up amid a panoply of religious and spiritual traditions. “Certain rituals have helped influence me…my mother was a social activist, and my father was a follower of Gandhi,” Johnson said. “[The statues] are not so much a religion as [they are] our personal growth.”

Johnson’s view of the Buddhas as catalysts for “individual contemplation,” leading to love, compassion and, of course, growth, may be a bit far-fetched. On the surface, a Buddha head, while interesting, seems unlikely to spur any real change on an individual basis, regardless of how serene its expression may be.

And yet, TTR’s Buddhas have germinated new art projects throughout the city, all in line with Changing Worlds’ program, and with Johnson’s vision. South Chicago, one of the city’s most violent areas, received ten Buddhas through Jackie Samuel, a director at Claretian Associates, a local community-organizing NGO. Samuel said that the Buddhas were used to kickstart various arts initiatives toward combating violence. “We wanted to look at other ways of tackling safety…we felt TTR provided that opportunity through social engagement, conversations around peace, and art making around peace.” 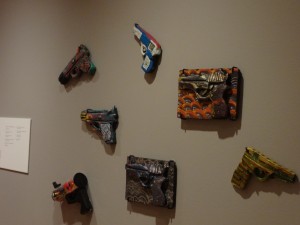 One of the most powerful art pieces to emerge from the Buddha’s wise, fiberglass countenance was created and conceived of by the local community arts center in response to the wave of violence that has broken over the city. The project, “343 Guns,” displays a creatively crafted sculpture of a gun for each of the 343 Chicago youth killed or injured during the 2011-2012 school year. Each gun was made of different materials by a different student. In a district where gun violence is nearly ubiquitous, many of the sculptures were brightly painted; technicolor on wood, papier-mâché, foam and found objects. One gun, formed from clear plastic tubes, was filled entirely with candy.

Another South Chicago art project, catalyzed by the local Buddhas in town, centered on a recent murder. Three students, two sisters and a boy, had been hanging out in the area, when they came under fire. As the shooter approached the children, the boy bent down to tie his shoes. The bullets flew over his head, killing the younger sister. The statue depicts the dead girl in her sister’s arms, as they wait for help. The sisters, made of alabaster, are sculpted in grief. The grieving sister’s teeth are finely articulated, moving the viewer toward the deeper and more primal cries emerging from her throat. The sculpture is brought to schools around Chicago for use in assemblies against gang violence. A poem, chosen from a school-wide contest, is inscribed in the statue’s side, and is read at each assembly. Its final lines read: “I am waiting for violence to end and for peace to reign; when that day ends, we shall be safe and happy again.”

Even in South Chicago, however, in spite of the touching and positive art that has rippled out of TTR, two Buddha heads were stolen. Largely, however, the response has been positive. Mark Rodriguez, executive director of Changing Worlds, said of the South Chicago program, “it’s brought people together…it’s activated civic engagement in artistic endeavors, and it’s really gotten people to become connected with their own communities.”

The Buddhas are gifts to the communities that take them. Johnson said that many of TTR’s support staff work as volunteers. In order to continue funding for the project, and to recoup some of the cost of manufacturing, TTR has begun to sell some of the statues at $2,000 a head.

That being said, the value of the statues doesn’t come from their weight in fiberglass, or from their zen-garden aesthetic appeal. Rather, it comes from their alternate identities as germs toward a more collaborative, understanding world. The smashed Buddha in Pilsen didn’t discourage the communities; rather, as Mark Rodriguez said, “the community responded by placing plants in there with different messages of peace and hope. With those plants growing, the message of hope will grow in and override the message of vandalism,” so that while we might never really know the sound of one hand clapping, we will still be able to see the growing ripples of community change from the Buddhas on our street corners.

Chicago Urban Art Retreat Center is the lead organization in the North Lawndale part of the TTR project. We decided to use 10 Buddha heads as part of TTR project to transform 10 vacant lots into 10 peace parks. Our plan is to landscape the lots, create life-size African American sculptures from cement and recycled materials, add a Buddha head and other peace sculpture, plus a bench, flowers, and make the peace parks available to the neighborhood of North Lawndale residents for peaceful days of playing, enjoying nature, & sitting to read the paper. We are planing an introduction to… Read more »