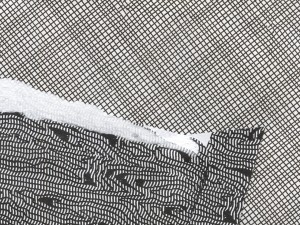 You have surely noticed, most likely just in passing, the intricate designs printed on the insides of envelopes, especially those that come from financial institutions. Dan Schreck has taken more than just a glance at those patterns, using them as the base for powerful photographic abstractions. For his compositions, Schreck cuts and tears up several envelopes with different designs—in black-and-white and blue—and then puts the pieces together into constructions, which he then photographs in color. The results are beguiling, involving and edgy in a visual sense (rough, straight, jagged and smooth) and psychologically (abrupt confrontations of dynamic shapes blocking each other in tension-filled force fields). Schreck’s most gripping image is his only large-format print in the show—“Vert”—in which a block of swirls collides with a cross-hatched diamond grid, and both patterns are partially bisected by the torn white gummed part of an envelope’s flap. There are hints of aerial topography in “Vert,” but that visual metaphor fades from awareness quickly when the eye is overwhelmed by the exquisite integration of so many formal elements. (Michael Weinstein)