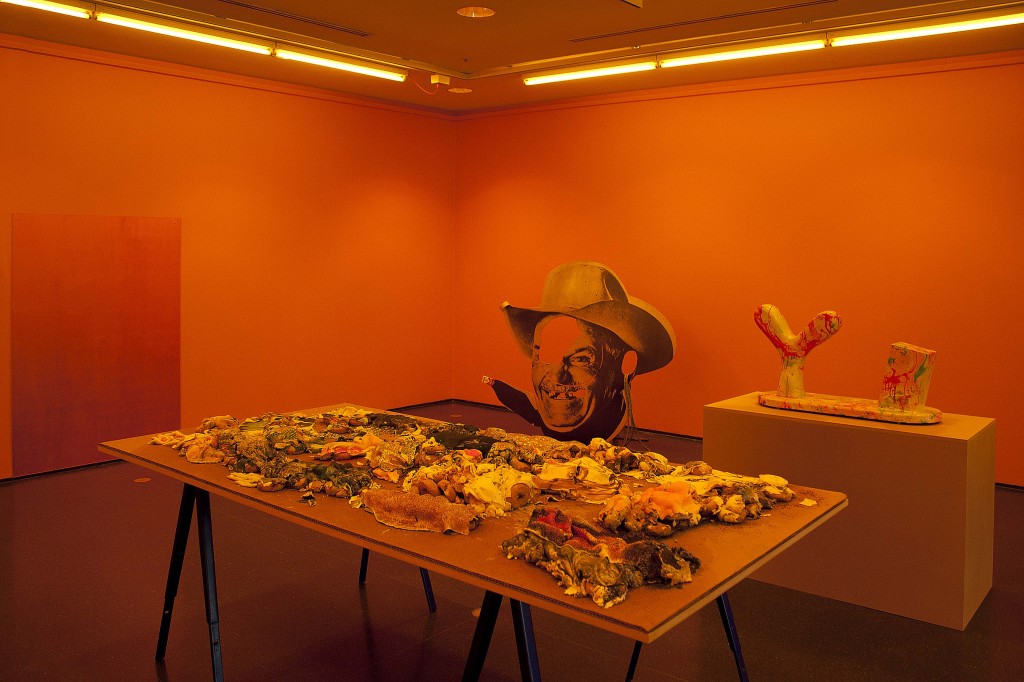 For decades, Gaylen Gerber has rendered conspicuous the assumed neutrality—both perceptual and rhetorical—of exhibition spaces and the institutions that house them, through gray monochromatic paintings and wall-sized supports upon which other artists’ works are displayed. Expression is outsourced, and Gerber’s parenthetical interventions make note of the factors that contribute to an audience’s experience of the discrete works shown therein. In recent years, he has transitioned into sensory riots of color and light, such as the project now on view at the MCA. Bracing tangerine and sweltering yellow blast over the gathered artworks, recalling earlier MCA installations such as Rudolf Stingel’s “Untitled (Orange Carpet on Floor)” in 2007 and Olafur Eliasson’s hallway of intense yellow light in 2009. Remembrance and art-historical play are apropos here as Gerber has included works produced over the past fifty years by other artists living and deceased, men and women, drawn from the MCA’s collection and on loan.

The main gallery space for Gerber’s exhibition is crowded with figurative representations in one sense or another. But rather than dominating the scene as basic compositional principles would have them do, Gerber is intent to overpower, subsuming them in over-saturated color and light. Did he select these ravaged portrayals in the service of his extremely pronounced environment, or is my read of them colored—literally and associatively—by their situation? DAS INSTITUT and Allison Katz’s table of faces and bodies crafted from painted and shaped pastries had attracted flies that looped through the air above them on my fourth visit. In the far corner, Cady Noland’s 1990 “Chainsaw Cut Cowboy Head” is from a body of work the artist made to denunciate the masculine heroics central to America’s self conception. At the convergence of Noland’s deconstructed male archetype and Gerber’s orange expanses, another artist—Cady’s father, the color field painter Kenneth Noland—is evoked, aggravating art lineages, family trees and the less obvious ways the works on view relate. Elsewhere, Gerber reacts to his own influences through a reenactment of a work the late Michael Asher made out of the MCA’s building and through the use of elements salvaged from a 2006 installation Daniel Buren created at the Arts Club of Chicago.

When context becomes the object of consideration, what is between becomes central. Gerber has prodded his staged encounters toward heated climax: between formalism and figuration; between conceptualizations and representations; and among artworks, their makers and museum. (Matt Morris)

Matt, An excellent review of Gerber’s exhibition. When he “hits the mark”… the work is exquisite. I really appreciated his understanding of constructing SPACE, that also embraced and “pushed” the work. He knows how to stage a space with visually strong interventions! One of the other exhibitions that he did, I have never forgotten – a the show he had at Donald Young’s old space in the west loop area. There: he totally changed the main space and literally, lined up in a long row, work he selected by other artists that again, included his own intervention. Your last paragraph… Read more »