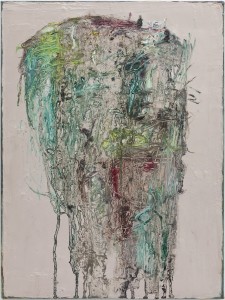 Rosalind Krauss and Yve-Alain Bois’ eclectic collection of writings on twentieth-century art, “Formless: A User’s Guide,” separates the concept of the “formless” (Georges Bataille’s informe) from form and content, as traditionally understood.  The works now at Corbett vs. Dempsey seem to fit this mold. Artist and musician Peter Brotzmann’s box-based assemblages use odd metal items and wooden shapes, screen and wire, foam and paint, tape and string. They incompletely suggest miniature landscapes or faces, Cornell-ish curios or whimsical Calder contraptions. His washy sketches, some two-handed quasi-symmetrical drawings of plants, cups and hands, some semi-abstractions on found paper, seem more like mechanical exercises than compositions. Hedwig Eberle’s cryptic scribbles in smeary polychromatic oil-paint blobs could be compared to Jean Dubuffet portraits. But these engaging works by Brotzmann and Eberle are too simple and nonspecific to make comparisons stick; rather, they occupy a nebulous archaeological space, a paleo-post-industrial sublime… which perhaps, for some, makes them aesthetically suspicious.

A recent essay by SAIC professor James Elkins continues a critical tradition denouncing “the sublime,” going back at least to Theodor Adorno’s repudiation of the prolific but problematic composer Richard Wagner, and evident even in Bois and Krauss’ dismissal of charismatic shaman Joseph Beuys, in their otherwise rather neo-Romantic compendium. As rational as the skeptics appear, it’s possible to see the fear inspired by Wagner and Beuys, and by extension their fellow Germans Brotzmann and Eberle, as an intended effect rather than a flaw. As Christoph Cox says of sound art, such work “short-circuits the aesthetics of representation and mediation and instead affirms an aesthetics of force, flux, and resonance.” “The search for this ‘pure’ excess of life not yet contaminated/obfuscated by the symbolic order is thus a mythical search for a fantasmic entity,” writes Slavoj Zizek. “We may well succeed in isolating this excess,” he continues, “but there would be nothing ‘human’ about it; it would be just a meaningless deformation.” (Bert Stabler)