As the art world shifts interest away from loner studio practices, it is relationships—long-distance relationships, no-strings-attached relationships, contractual relationships—that make an excellent metaphor for the relevancy of art in our lives. Three exhibitions this week make transparent some interpersonal, artistic relations for all to see.

The iconic modernist glass house in Plano, Illinois, could be the banner image for the state of modern privacy. Designed by architect Ludwig Mies van der Rohe, and sited sixty miles southwest of Chicago, the Farnsworth House, a home with glass exterior walls, reveals all of its insides, a fact that the home’s original owner, Dr. Edith Farnsworth, found to be “unbearably oppressive,” wrote architecture historian Joan Ockman. Farnsworth felt like a hamster in a cage or an actor on a stage while she inhabited her second home from 1951-71. 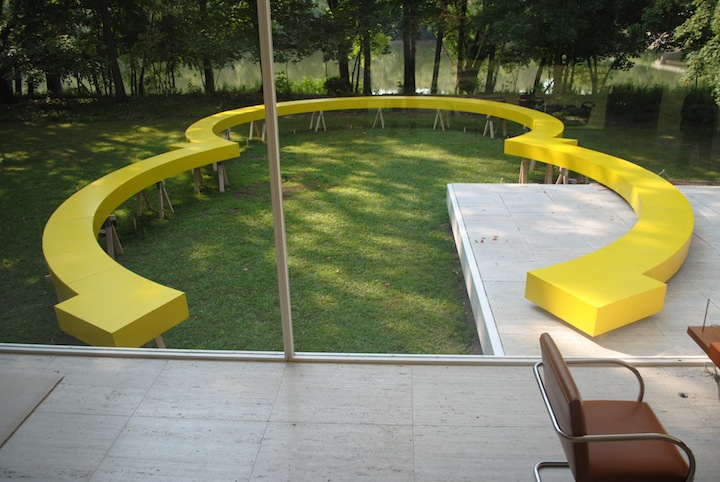 Farnsworth expressed her anxiety of living in a glass box to House Beautiful magazine, in 1953. The white-steel-and-glass box has a patina of anxiety. It animates its character. Anyone who visits imagines herself living in the raw glass box, with its attendant discomforts.

For the next several weeks, the Farnsworth House has a guest living on its porch: the skeleton of the Melnikov House, an avant-garde Russian house from the 1920s. The floor plan of that Moscow home has been replicated to scale in wood, painted yellow, propped on sawhorses, and now abuts the Farnsworth House’s front yard at a perpendicular angle.

Typically a beacon of serene, solemn contemplation, nestled among cornfields and the Fox River, the Farnsworth House is now interrupted by the Melnikov House. Artist Osvaldo Romberg calls this a “translocation.” He has performed this sort of intervention at iconic architectural sites around the world.

“Forms happen, like love,” said Romberg on the steps of the Farnsworth at the premiere of his artwork. The two homes brushed each other coyly, touching almost not at all. Where the Farnsworth is all right angles, the Melnikov floorplan is two bisecting circles, like a Venn diagram. The approach and quiet reveal to the Farnsworth is gone. Surely the home’s staff (it is owned by the National Trust for Historic Preservation) will receive complaints from visitors because the assumption of Miesian purity has been disrupted—but was it ever really as pure as we imagine it to be? Romberg’s collision tells us that relationships are complicated. It is friction—among patrons and architects, or among international architectural styles, among unquiet ghosts—that juices the energy of contemporary viewers. The Farnsworth can use a few more drastic interventions, creative reconsiderations, psychic exorcisms and contemporary reinventions. Through October 13 at the Farnsworth House, Plano, Illinois.

“LESS IS NOT MORE” is printed on a seven-foot tall t-shirt. It is a collaborative artwork by Amanda Ross-Ho and her father, Ruyell Ho. Dr. Edith Farnsworth said that exact phrase in response to Mies’ famed “less is more” dictum. That aesthetic battle continues, taken up by the Ho family to celebrate life’s variegated abundances, including human relations, which we perpetually prod with the question: is too much never enough? 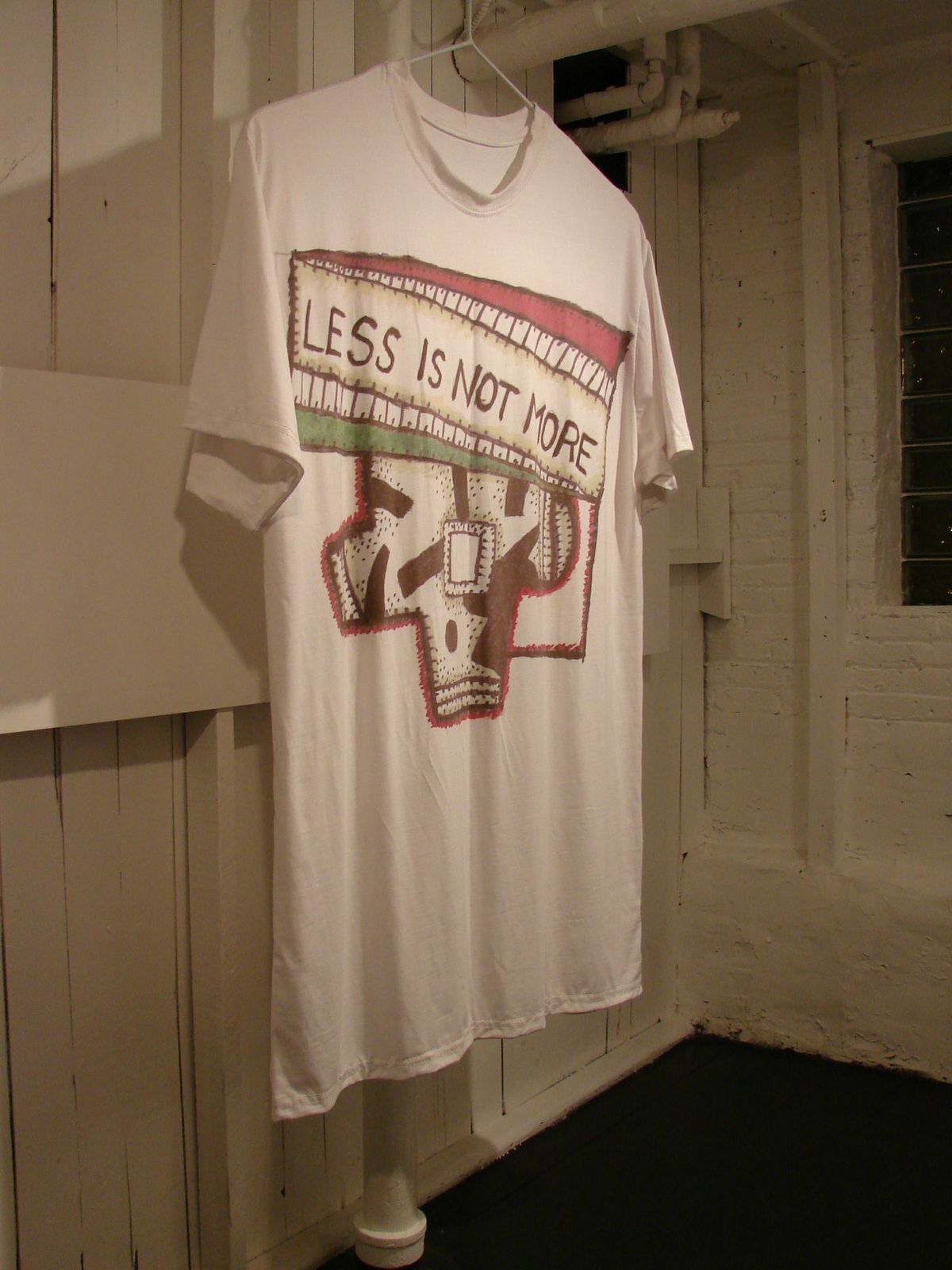 The Ho family’s custom t-shirt hangs in the exhibition “Unioned Labors” at The Bike Room in Rogers Park. The group show features two-artist collaborations, including husband-and-wife Judith Geichman and Frank Piatek, and teacher-and-pupil Alberto Aguilar with Alex Bradley Cohen. The collaborative duos, paired by curator Nancy Lu Rosenheim, spawned passionate, vibrant, spirited artworks. In particular, Aguilar and Cohen created in harmony, and their play is captured in a video work by Ashley Thompson, which includes footage of them performing a dance-battle-handshake, a sound poem that weaves their voices, and documentary shots of their cardboard wallpaper paintings being made. Through September 22 at The Bike Room, 1109 West North Shore.

Washington, DC-based artist Patrick McDonough has often looked to Chicago and its art scene as “a figurehead place,” he says. Around the time that Contemporary Art Daily (a website that posts images of contemporary gallery art) launched, McDonough started admiring paintings online. The internet welcomes such fandom. McDonough stared at his screen, sometimes deeply, sometimes casually, at images of paintings by Judy Ledgerwood, Todd Chilton, Matthew Metzger, McArthur Binion, and others. “I’m a fan of all these artists and these works, but I’ve never seen them in person,” he says. 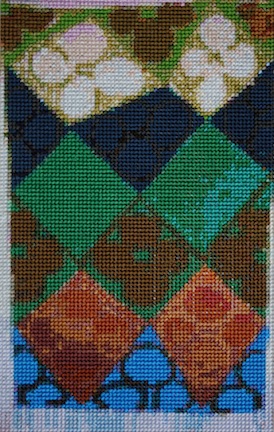 McDonough interpolated the jpegs of these paintings into needlepoint artworks of meticulously stitched colored yarn. The gridded structure of needlework is a good support for the mostly geometric abstract paintings, and replicates a jpeg’s pixelation. A grid of nine remakes are on view in the exhibition “Abstracting the Seam,” including needlepoint “paintings” of Julia Fish, David Schutter, Dan Gunn, and Michelle Grabner artworks, among others.

McDonough estimates he spent eight to one-hundred hours on each piece. “I just do it on my couch at night,” he says. All are the size of an 11×14-inch sheet of paper, sized for kitsch appeal. The artworks are close, careful homages to art idols. Farnsworth House has a LEGO recreation; Chicago painting has McDonough’s one-of-a-kind applied-art fandom. I can think of few better affirmations of our unique cultural contributions than these adorable fetishes. Through September 15 at the Hyde Park Art Center, 5020 South Cornell.