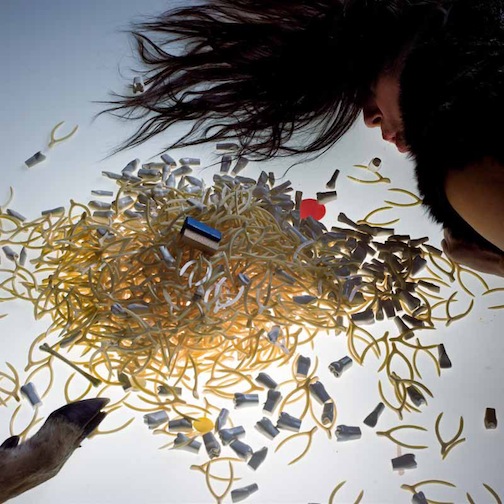 The tried and sometimes true genre of identity photography makes a powerful comeback in curator Tommy Reyes’ insightfully apposite pairing of feminist self-portraitist Linda Adele Goodine’s large-format color scenario narrative of her liberation from the feminine mystique, and Antonio Martinez’s hilarious large-format color send-up of its masculine counterpart. Goodine’s remarkable final image has her profiled head and wildly flying black hair in the upper right of the frame; she is spitting, perhaps vomiting, out a hail of numbered teeth and chicken wishbones, and has already accumulated a mound of both on the lower left. Goodine is visually reflecting on the mother-daughter relationship and her capstone image marks her expulsion of the dreams and expectations with which she was implanted and has now overcome. She is dressed in a sexually assertive black woolly dress—an elegant savage. A hoof protrudes in the far lower left. This is how a riot girl is born. 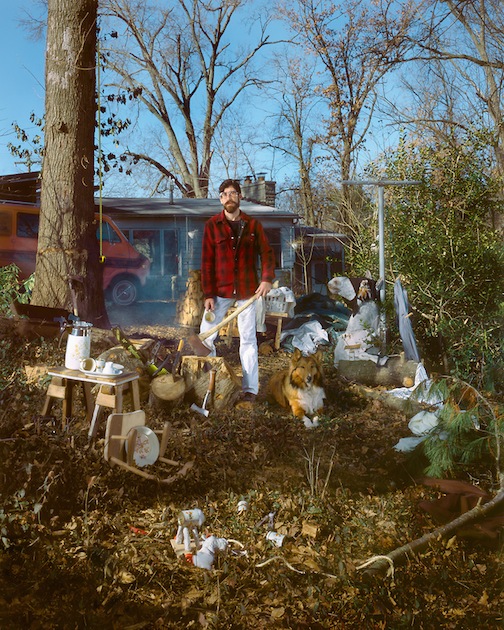 The sensibility drastically shifts when the viewer turns to Martinez’s scenarios of “real” men doing their things down in the boondocks. In one of his representative images, we see, in the center of the frame, today’s mighty woodsman standing holding an ax embedded in a tree stump; he is flanked by a collie and surrounded by a mess of trash that would surely evoke a tut-tut from any traditional woman who might pass by. But our yeoman’s outsized eyeglasses and pathetically bewildered expression give it all away—I’m a loser, baby, or at least the whole game is absurd.

It is to Reyes’ credit to have captured the two polar paradigmatic responses to the gender revolution. Women are up to the serious business of liberation (even when they are at play); men can trade off their inherited social and cultural advantages. For one side, it’s a fight; for the other, there’s the luxury of accepting a hit. (Michael Weinstein)