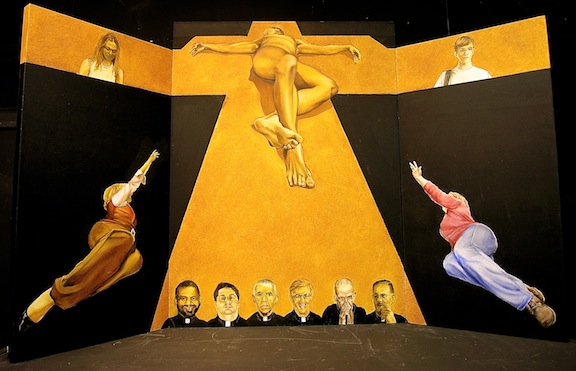 Liturgical Christian art is no more likely found in galleries of contemporary art than in mosques. So, at first it was puzzling to find three chapel-sized altarpieces in Roy Boyd Gallery, a space usually dedicated to abstract painting and sculpture. Though not as saccharine as church art tends to be nowadays, these paintings do seem to be sincere statements of faith in the central importance of the crucifixion for the redemption of mankind—a faith that’s not necessarily contradicted by the male flesh that the same artist painted erotically rather than spiritually on display in the back of the gallery. After all, Titian painted voluptuous courtesans as well as the “Assumption of the Virgin.” But, according to the artist’s own commentary, the three altarpieces present the most cruel and predatory practices of the Catholic Church: the Crusades, the Inquisition and sexual abuse by priests. So, perhaps these paintings are better seen as attacks upon the church rather than affirmations of its doctrines, inviting the viewer to share the artist’s dilemma as a “recovering Catholic.” He still is drawn toward a transcendent narrative that elevates sacrifice for humanity, but the institution that taught him that narrative has a history of sacrificing others to defend and aggrandize itself. This is the same institution that condemns him as a homosexual, while sheltering priests who have practiced it with children. So how will this dilemma be resolved? Will Gibbons return to painting the non-narrative, abstract patterns that he showed in his earlier years at the gallery? Or will he continue to refine his skills as a liturgical painter? As a professional architect, he has a strong sense of space and knows how to fit it around solid, anatomically developed human figures, the prime qualification for Christian art ever since Giotto. But his work still falls short of divine glory. It’s didactic but not magnificent. Can magnificence be achieved without defending the spotless reputation of the Church? Perhaps—if one keeps in mind those medieval cycles of murals where even bishops, priests and monks were shown being dragged down to the fiery pit. (Chris Miller)