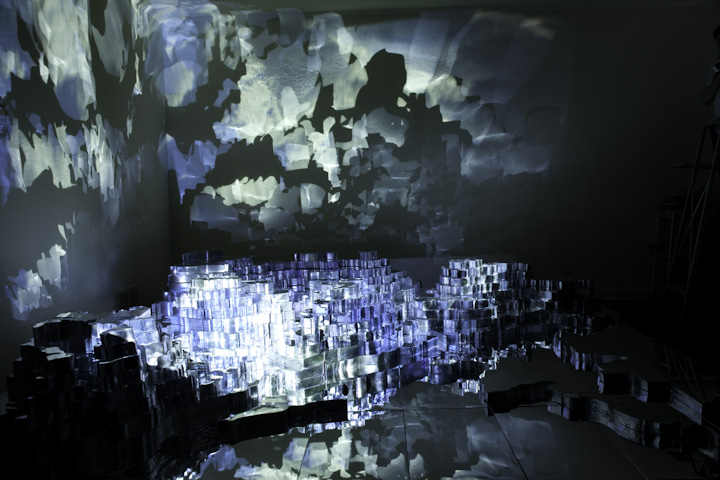 An undulating mirrored moonscape of curves and climbs, the multimedia installation “9-11-57” is something of a lateral step for Tracy Marie Taylor, both in media and message. Taylor is a product of the American West; her Colorado heritage comes replete with a cowboy grandfather who would ride to roundup three-thousand head of horses, and family members she fondly describes as wearing cowboy boots and handlebar mustaches as formal wear. Hair the color of adobe clay and an expansive, brilliant smile calls to mind the northern reaches of the Chihuahuan Desert, where she studied at the University of New Mexico. Taylor’s work consistently mines this rich cultural vein for inspiration; what sets “9-11-57” apart, aside from being her first sculpture, is what aspect of the West she is choosing to reflect (literally, in this instance, with mirrors).

“9-11-57” is a USGS-quality, laser-cut topographic map of the site of the Mountain Meadows Massacre, where on September 11, 1857, Mormon militiamen, as well as deceived Paiute Indians, slaughtered 120 emigrants, including men, women and children, on their way to California from Arkansas in southern Utah.

“My work has always been about the West,” Taylor says. “I think it was originally from more of a white perspective, more of a personal response to growing up in the West.” Taylor’s interests have shifted thanks to being exposed to new sides of the western theater. “It started with a workshop that I do on the Pine Ridge reservation in South Dakota,” Taylor says. “Every summer I go out there with some of my college students [from Lake Forest College, where Taylor is an assistant professor of Art and chair of Digital Media/Design] and I teach an art and technology workshop to at-risk teenagers. 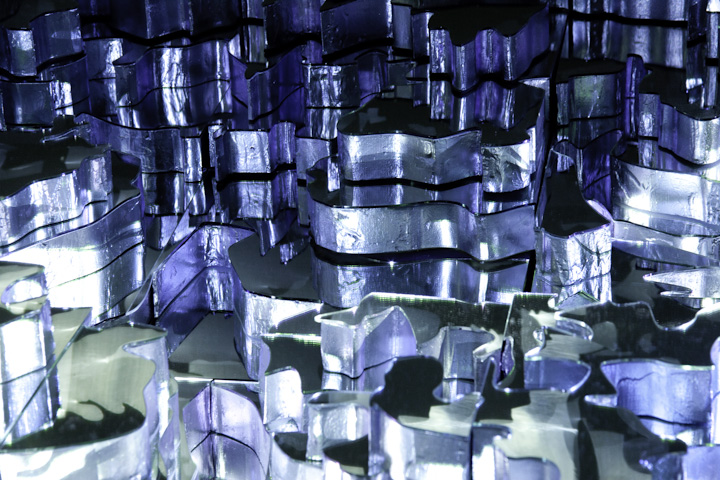 While in South Dakota, Taylor came across a book chronicling the worst massacres in U.S. history, and was struck by how often Native Americans were involved, whether it be as victims or implicated perpetrators. “I just thought that was really interesting,” Taylor says. “When I was a kid growing up, my limited history that we were taught in third grade was that Native Americans were savages.” The discovery that the Mountain Meadows Massacre was left untouched by history classes galvanized Taylor’s desire to base a work on the horror.

Stripping away the manmade atrocities of the site, Taylor’s Mountain Meadows is eerily beautiful, as if the deep, sinuous wound was dressed with mercury; that those same beautiful curves obfuscate the heavens reflected above them calls to mind blood’s unparalleled ability to stain, as well as the fractured lives and accounts it leaves in its wake. It is a lesson Taylor hopes to impart in what is the first of a trio of works, the other two of which will focus on the carnage at Wounded Knee and Sand Creek.

Taylor’s sense of journalistic objectivity laces “9-11-57” with a cold beauty. “I’m just interested in telling the story. I’ve tried, in my work to be as fair as I can while still telling the truth about what actually happened.” (B. David Zarley)