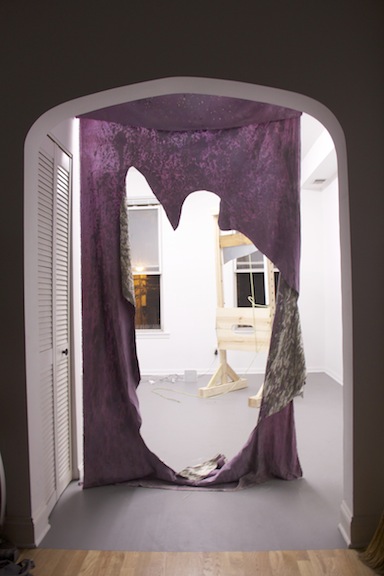 Neither a group exhibition of individual expressions nor totally homogenized into a collaborative effort, Dos Perros’ “Guyth” is restlessly situated between self-interested poetics and mob mentality. The works on view by Luis Miguel Bendaña, Sam Lipp, Chloe Seibert and Alison Veit stage an adaptation of the French Revolution represented through listless pageantry, and in so doing consider the socialized body through themes of fashion and commodity, and the performed execution of a batch of éclairs.

All six pieces are predominantly colored puce and caca d’oie (a green-yellow named in French after goose droppings; this is also the title of all of the artworks.) Both colors were considered quite desirable in France around the time of the Revolution being referenced here. Even the aforementioned pastries at the opening were filled by Seibert with a gray-violet filling that smeared across her ramshackle guillotine as she dropped its aluminum sheet to sometimes successfully halve them.

Decadence and defeat run through all of their hardware-store materials done up in a kind of disheveled aristocratic drag. Bendaña enamel-on-linen monochrome blushes and oozes with the pinkest, gummiest puce in the room, while its sister, a painting by Lipp in green acrylic on utilitarian black plastic, anticipates the show’s determined hue being commonly mistook as a repulsive green. Taken together the two paintings distill the exhibition’s crowded suggestions and conceits to color’s easy potential to call attention to desire, misunderstanding, contrasting positions and otherness.

As the four artists in the exhibition prepare to disband the studio they have shared for thirteen months, a national revolt is a melodramatic metaphor by which to represent the end of an era. But for as much of their shared aesthetics revel in blasé understatement, the sentiment that would align such alternative art world economies as apartment galleries and studios shared four ways with a decisively populous politic feels heartfelt. The persistence of such self-manufactured exposure and opportunities resonates with the quirky magic by which banal junk and passé color schemes are upcycled into rarified art objects.

History shows that revolutions succeed revolutions before them, often reconstituting what was objectionable previously, and puce refers not so much to the color of a flea as to the color of the blood it expels when it is killed. Playfulness aside, “Guyth” invokes some somber prompts for considering how these artists’ visions of the art culture they are building should differ from the one that precedes them. (Matt Morris)