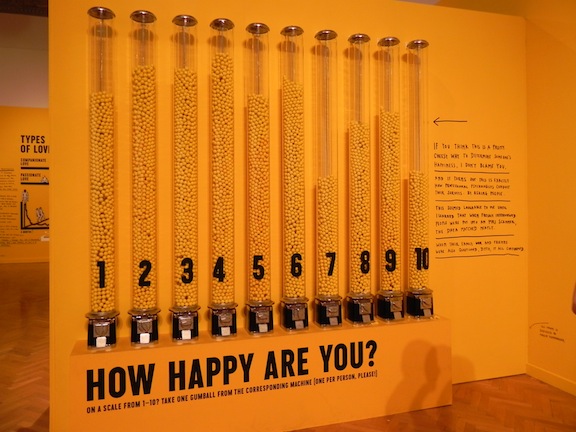 Light, melodic music reaches the ear while you are still ascending Chicago Cultural Center’s grand staircase to “The Happy Show.” The Austrian-born, New York-based designer Stefan Sagmeister, famous for designing album covers for Aerosmith and the Rolling Stones, has been ruminating happiness for over a decade, and he presents his findings inside. At the exhibition entrance, Sagmeister warns in a handwritten text that you will not find happiness here, but he does provide a hint, one of his discovered wisdoms on reaching happiness: “Low expectations are a good strategy.”

Along with such truisms, the galleries present selected statistics and research on happiness in a palette of yellow, white and black. Sagmeister has creatively packaged some of his insights into film installations, while others he scribbled on the wall to result in an informal, exploratory environment. 32,000 meticulously pasted cigarette papers cover an entire wall and spell out “uselessness is gorgeous,” a justification for all artistic production. Most statements, like “over time I get used to everything and start taking it for granted,” are things you already know, but Sagmeister charmingly presents them with whimsy rather than wisdom. “It is almost impossible to please everyone” is spelled out in a video on the shapely, aged body of Maira Kalman, a New York Times blogger whom Sagmeister declares as the only non-criticized human.

The Chicago Cultural Center’s exhibition program struggled during the economic recession and recent restructuring of Department of Cultural Affairs and Special Events. This spectacular show announces the Center’s comeback. Even on weekdays, curious visitors fill the exhibit, many interacting with installations like Sagmeister’s barometer of ten gumball machines measuring happiness on a one-to-ten scale. As I watched, a security guard chose a “1” gumball, while a homeless man chose “10.” A young couple taking wedding photographs selected their happiness as “10” before encountering Sagmeister’s sobering scientific analysis of happy feelings resulting from love.

It is hard to imagine another venue for this exhibition bridging design, art and life. Even Sagmeister’s enormous inflatable monkeys, spelling out “Everybody always thinks they are right,” perfectly pushes against the formal, gilded ballroom. (Anastasia Karpova Tinari)

Through September 23 at the Chicago Cultural Center, 78 East Washington