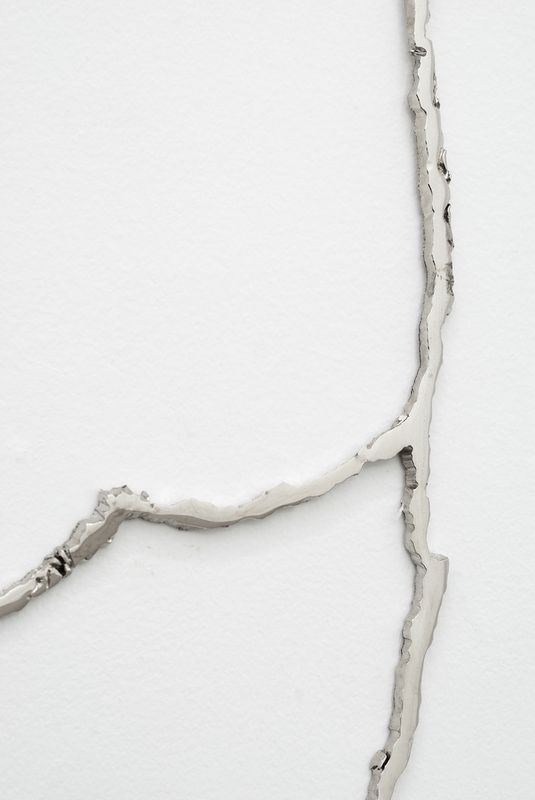 Michael Genovese’s linear wall reliefs mimic the everyday cracks in pavement, walls and other human structures that surround us; they also serve as traces and indexes of the less tangible fractures around us. His current exhibition at Paris, London, Hong Kong (the new gallery’s second show), “Joliet,” references the city that brands itself the “crossroads of Mid-America” and has historically served as both a railway transportation hub and a site for adult and juvenile prisons. Genovese, originally from Chicago, uses these local associations to his advantage, giving the slick, nickel-plated, mirror-polished steel cracks that crawl across the gallery space more political and historical weight. But the formalisms of the cracks themselves stand alone as repositories for abstract imagery from natural and invented worlds: like stitched seams, imagined lines of constellations, and uncanny growth of strange plant life, they seem filled with forces of gravity and grace, dripping down walls or attempting to scale and branch. The overall effect recalls Charles Ray’s famous declaration about “Hinoki,” on view at the Art Institute of Chicago, that he was trying to “breathe intentionality into” the found rotting log that he copied in a wooden sculpture. Nickel-plated pipes and occasional sculpture offer counterpoints, as do some apples of different colors cut in half and rubber-banded together—a suggestion that we ought to take the show somewhat playfully—and the artist book “Lines and Cracks and Zebras and Horses,” which combines Genovese’s photographs of found cracks with shapes that echo them. (Monica Westin)