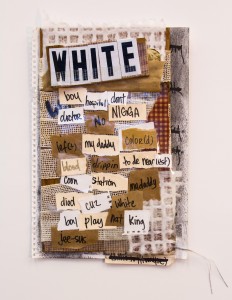 Sharing a dedication to the arts and yet diametrically opposed—one bathed in the warm glow of gentrification, under the aegis of the University of Chicago, the other in Washington Park on the periphery  of the cluster of shops and street violence murals (“Spray paint, not bullets”) that have sprung up like foxglove in the shadows of the Green Line on Garfield Boulevard—one would be hard pressed to find a better dyadic home for “The Distance Between,” the consummation of the artists-in-residence  for the Arts+Public Life/Center for the Study of Race, Politics & Culture, than the Logan Center for the Arts and the Arts Incubator.

Separated from one another by the verdant expanse of Washington Park, the environs surrounding Logan and the Incubator ably reflect the Janus-like face of the South Side; “The Distance Between” revels in, pontificates upon and avails itself to said space. At the recent “Park Crossing” event, live music from resident artists LeRoy Bach and Tomeka Reid straddled the park, most notably in “Washington Park Suite,” which featured cellists Reid and Fred Lonberg-Holm playing ad-hoc, simultaneous improvisational movements from across the park, their individual contributions manipulated and reflected to each other in real time across the space by Todd Carter and Alex Inglizian.

The suite was engendered by the titular park, with Reid naming a litany of inspirations after her performance. The idea of flight—which, judging by the image on Reid’s pictograph-cum-score, referred more to the Great Migration than the park’s avian denizens—was characterized by the quick slashing of the cello as if by a butcher.

Two of Washington Park’s most influential personalities were woven in with a Jesse Binga movement, whose notes were solely composed of B flat, G and A, and the inclusion of a reading of influential jazz composer/cosmic philosopher afrofuturist Sun Ra. The park’s most boisterous resident was nodded to as well; the thunderous belly scales and heraldic “ding-dong” of the Green Line could easily be made out in Reid and Lonberg-Holm’s cacophonous ode. 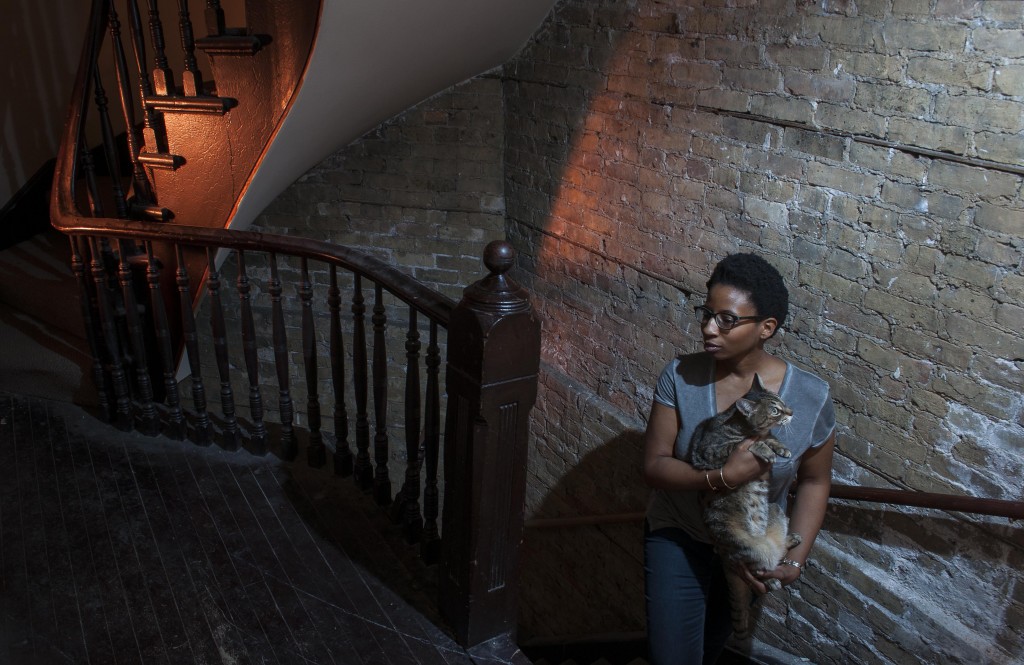 While “Washington Park Suite” bridged the gap between the Incubator and the Logan Center, the photography of Cecil McDonald, Jr., in juxtaposition with pieces by avery r. young, expressed the divide.

McDonald’s photographs carry a sense of peace, of the quiet pulchritude one can find in the home, as sunlight turns houseplants into shadow puppets or a magazine is browsed in a room whose stark aesthetic mirrors what is on the page. young’s work seems fearsome  borderline apoplectic, in comparison.

Gathering influences from as far afield as Jesus Christ and Lil Wayne, young’s works co-mingle the sacred and the secular with the profane and the pointed, reflections of the turbidity and violence of the South Side with whom the Incubator shares more in common than its counterpart.

“My work has always been in the communities such as Washington Park,” young says. “That’s where I grab the stories and the language from.”

And what language! Phonetic and nude, young’s dysphemic verbicide comes scrawled onto scrap paper and wood, lexical jetsam best exemplified in the Incubator’s “30.30.13:lady sing(s) de blue(s) or billie head was bleevin at Carnegie hall,” where its paper footsteps stagger across a wooden trestle. young’s language takes a supporting role in his Logan-displayed tar pieces, which drown paper, metal, sandpaper and other materials—including, poignantly, vinyl, perhaps representative of the strong black influence on American music—in tar. Placed onto Plexiglas,  the words float above the morass in “de holyghos(t) n’em” and “what booker t. told lomax,” raw and transcendent.

Being an exploration of space and community as it pertains to “race, politics & culture,” it is fitting that the most poignant moments of the exhibition came organically, from the neighborhood itself. As Reid sawed away in the Arts Incubator, horse hairs hanging from her bow like spider’s rappel lines and with the ashen mist of Garfield Boulevard behind her, one could see the reactions of passersby; many slowed to offer nonplussed stares, a few even coming to a brief pause. None came inside, the distance between thicker and more opaque than the window they pressed on from.

“The Distance Between” continues at Arts Incubator, 301 East Garfield, and Logan Center Gallery, Reva and David Logan Center for the Arts, 915 East 60th, through September 29. avery r. young holds an “artist encounter” on September 25 at 6pm at the Logan Center.