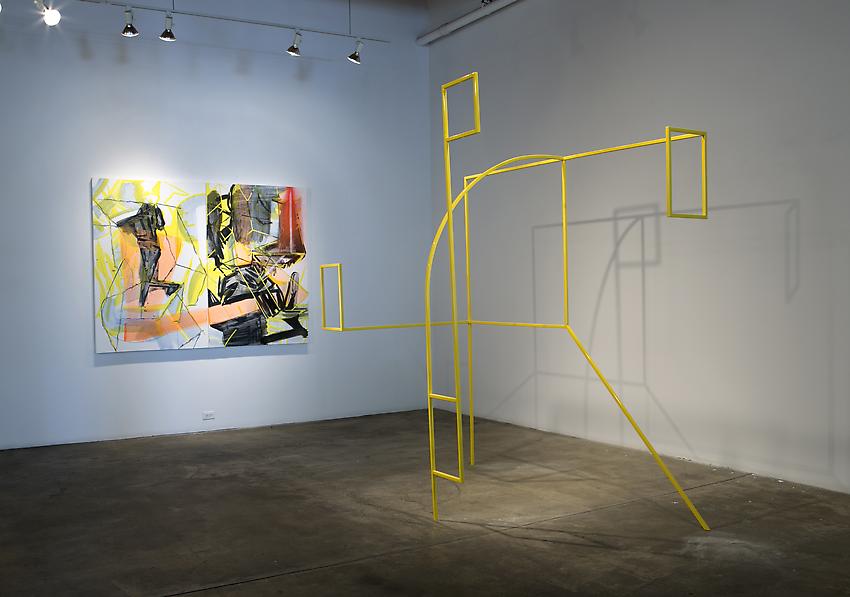 Andrew Holmquist’s “Give and Receive” and “Armature”

Chicago’s traditions and innovations in painting are often oriented to bodies and problems with their deconstruction. Perhaps due to the Imagists and their successors, many of our ongoing conversations in visual production bear consequences of how bodies, individuals and populations are identified, relate to our environments and express desire. Several recently opened exhibitions of painting and painting-adjacent projects employ color, pattern, figurative representations and material excess to advance contemporary notions of bodies.

In Andrew Holmquist’s exhibition “Marco (Polo)” at Carrie Secrist Gallery, the loony cartoon characters who have starred in the painter’s earlier work are all but absent, replaced by wide swaths of color and needling line-work that correspond to the linear structure of “Armature,” a lemony, powder-coated steel jungle-gym sculpture. If there is a body present in many of these works it is the fantastical author capable of these gestural brushstrokes enlarged beyond human scale into commanding and mechanized übermensch sensibilities.

“Big Leap” is the largest, gushiest and smartest painting one sees upon entering. A pool party of stripes, inner tubes and lively waves swirl above a pair of feet at the bottom edge of the canvas. Its composition and imagery readily recall Jasper Johns’ “Diver” and David Hockney’s homoerotic backyard pool paintings of the late-1960s. Holmquist reproduces the measured queerness of his painter forebears and adds to it a racy, thrilling flamboyance that erupts as the “Big Leap” to which the title refers. These vibes continue into his “Phantom Geisha” archival inkjet prints which layer bare chests, naked legs and sketches of elaborate costumes into loudly magenta awkward drag characters.

Judy Ledgerwood’s ongoing painting project probes the potential for color and pattern to elicit desire. Testing whether “the heart wants what the heart wants” at increasingly larger scales, her new exhibition “Love, Power, Color” at Rhona Hoffman Gallery coincides with a solo exhibition at Häusler Contemporary in Munich and inclusion in last month’s Expo Chicago. The five sassy behemoths on view are upsized into physical metaphors for the “too big to fail” multi-continental art market bubble in which they are participants, with each canvas heavily ornamented in gold and other metallic paints toward blingalicious effect. 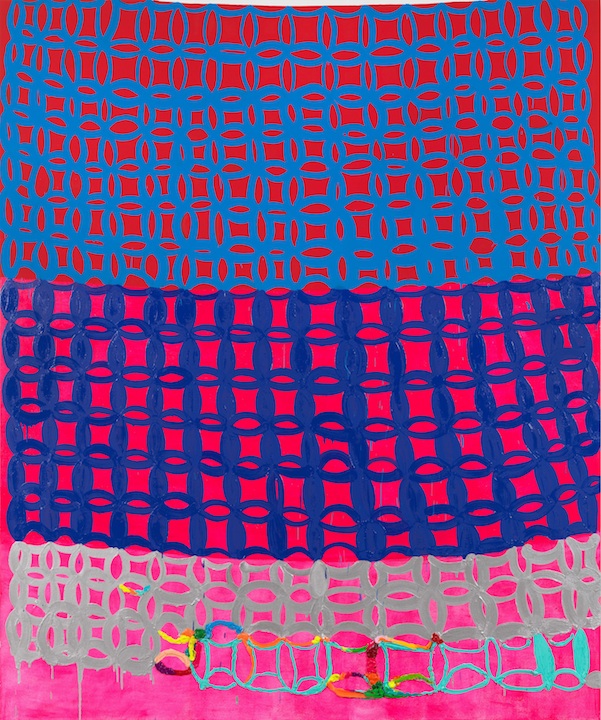 Ledgerwood doesn’t paint figures, but rather attempts paintings that tenuously attend to an individual’s perceptions of vibrating hues and compelling compositions, as well as to the art-world systems in which one encounters them. At these larger-than-life scales, a hulking global economy moves to the fore in which simultaneity is not fast enough and where a fragile individual could easily be lost in the throes. If love, power and color are potential transcendental experiences, they are also treated here as transactional currencies—means to buy into greater realms of influence.

Robert Chase Heishman and Megan Schvaneveldt’s two-person exhibition “Of This Place, Or Thereabouts” at Roots and Culture is a comedy that depicts bodies situated in virtual conditions that fragment, compress and deconstruct. The joke is in the arduously physical, manual means by which these propositions are achieved. Heishman’s photographs document elaborate patterns in brightly colored tape that have been laid across parts of rooms. The flashy teal dashes across what might be a dirty cellar floor in “_IMG #14” perform like Ledgerwood’s looping painted patterns. The jubilance of his palette is deflated by the compressed, flattening effects of his optical illusions. 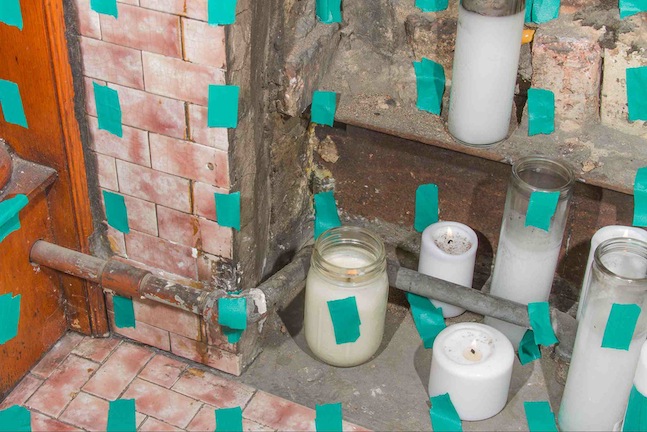 In the duo’s collaborative video “Ibid. (for Chris Naka)” they imitate the zoom and scroll features of touch-screen devices through an elaborate choreography of mirrors, rolling chairs and pantomime. Dancing two steps back from the front edge of technological advancement, Heishman and Schvaneveldt celebrate a feel-good politics of handiwork and human connection.

While bodies and their desires are effusively explored in these exhibitions, eroticism is mostly only ever alluded to. The sexiest in show is not the biggest or brightest, but the blowsy burlesque abstractions Schvaneveldt crafts from wood panels and fabric sundries. The intimately scaled “Fringe” is a triangular tasseled merkin inlaid into a sheet of plywood. Meanwhile, her “Torso” might be a suggestive surrealist abstraction by Arp or Giacometti but for the fishnets and other hosiery stretched over the biomorphic wood cutouts. With the crotch of a pair of leggings wrapped around the left edge of the panel, Schvaneveldt crosses woodworking with striptease and conjures a bawdy body through delicate formal choices.

It is a superhuman these shows describe, that is, the cunning ways bodies are not lost, but reimagined for the fraught current conditions that surround them. Rather than illustrated, they loom outside their canvases, revealed in gestures supersized into incredible swoops. They look for brazen ways to both participate in and critique the fast-paced, far-reaching art worlds around them. They are conglomerates and collaborations inventing operations by which to build relationships. They perform weird sex—digital drag queens, glowing giantesses and wooden lingerie—pointing to the wild possibilities yet to be explored through bodies and their material manifestations in contemporary art.