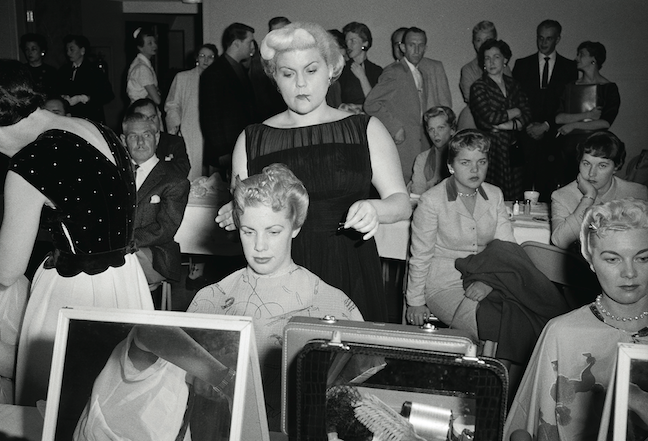 Jennifer Greenburg is the Cindy Sherman of our post-feminist times. A consummate performance photographer, Greenburg has all of Sherman’s wit and irony, put to the purpose of a girl just trying to have fun. Of course, post-feminism was around way before that term came into fashion; think Cyndi Lauper. Greenburg has a different and decidedly visually delectable way of parading her seemingly inexhaustible personae. Make no mistake, the black-and-white images in her project of “revising history” put her as the star in her scenarios, with the other members of the cast playing supporting roles, though they never would have known that they would be drafted for that duty. What Greenburg has done is to use the computer to alter vernacular anonymous photos that she has picked up here and there by inserting her face into the images, replacing the visages of the original subjects. That move allows her to make the shot her own, because she can subvert it, enhance it, send it up, or take it down to her fancy’s content, simply by putting on an expression. Greenburg had a dream and it came true in photoland; she “Did Hair for a Fashion Show.” We see, in the background, an audience of oh-so-serious and often bored or distracted onlookers gathered to see Greenburg work on a model’s coiffure; the stylist for a day is strictly business as she prepares to insert a hairpin, with the one to follow wedged firmly between her pursed lips. Greenburg, of course, dominates the scene, front and center and big; it’s all about her, yet the crowd doesn’t seem to care. Such is what dreams are made of when we set about revising history by welding fantasy and photographed reality to create a simulation. Greenburg knows that you can’t always get what you want, but maybe you’ll get what you seem to need. (Michael Weinstein)