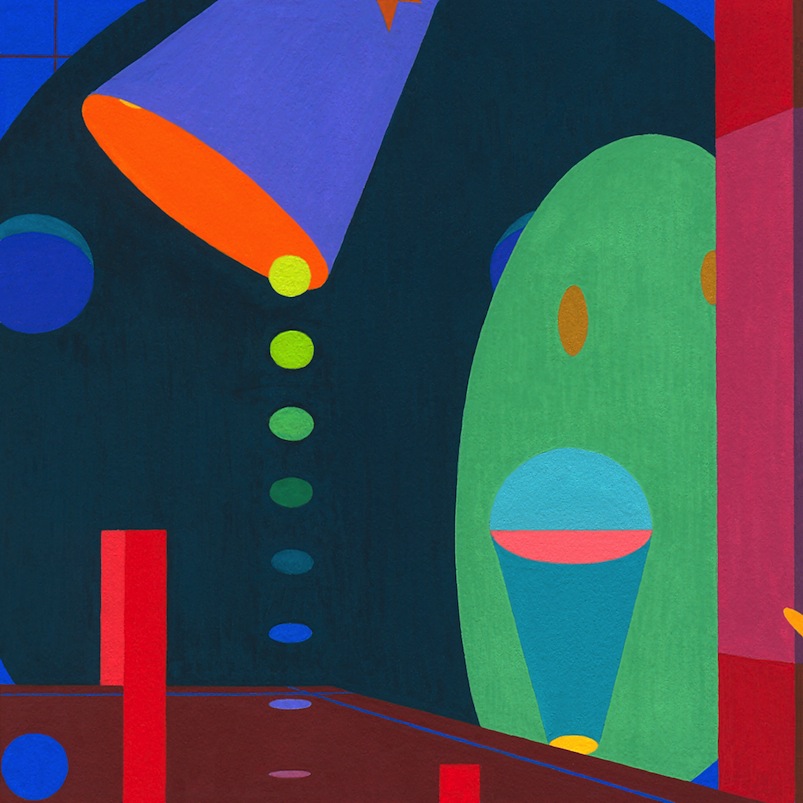 Even in the world of miniature paintings, the work of Nicholas Sistler is rather small. Every piece in his current exhibition measures four inches on a side. There’s no way his paintings are going to enter your world; you’ve got to focus in on his. As gallery trippers may recall, his 2012 show at Firecat Projects featured interior scenes with suggestions of sexual anxiety. The neat, nondescript, smooth surfaces in strong primary colors echoed the décor of fast-food restaurants, and human figures appeared as flat images tacked up on the imaginary walls, often suggesting furtive sexual obsession, depicted with the off-kilter angularity of a comic-book crime scene. Oh, for a breath of fresh air!

Such representational imagery is mostly absent from this exhibition, but the intensity is still there. The artist has moved into a kind of geo-form abstraction where a community of distinct patterns, sometimes more suggested than completed, happily coexist even as they move outward toward the edges to escape their confinement. Isn’t this a fine metaphor for modern, secular, creative urban life?

Sometimes the remnants of interior architecture still remain as what might be curtains, molding or walls. And the pieces often resemble aquaria of beautiful tropical fish, where sharp-edged, brilliantly colored geo-forms float suspended in space, like the pieces of an Alexander Calder mobile. This is the carefree modern aesthetic of about fifty years ago, more playful than serious, with no sense of moving toward or outward from the great spiritual oneness that drove the abstract design of Buddhist, Islamic or other more pious civilizations.

The artist really seems happiest when not thinking about sex, and though he never studied or taught at Chicago’s legendary Institute of Design, he may now be the most inventive proponent of its aesthetic. (Chris Miller)