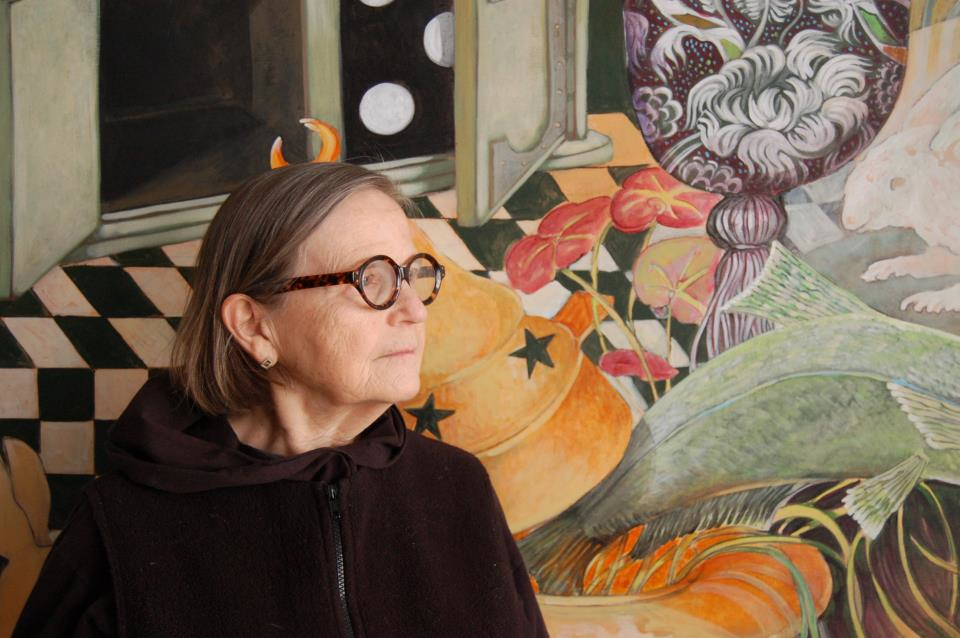 The first time I met Ellen Lanyon she told me I asked too many questions. “It’s better to leave those questions here,” she said, tapping her noggin. In the five years following, I met with Ellen many more times, in coffee shops and in her painting studio, and learned that she was more than willing to open the encyclopedia of Chicago art history that resided in her head and relate its content—but when it came to talking about her own art, she liked to keep things a little mysterious. Like the Victorian-era gadgets and contraptions that she collected and depicted in her paintings, only Ellen knew how they worked; only Ellen knew what they really meant.

Ellen never retired from being an artist. At eighty-six-years-old, she continued an active painting and printmaking practice. She passed away unexpectedly on her return from a week at The Print Studio in Cambridge, England, where she was creating a new series of four prints, titled “Curiosities.” 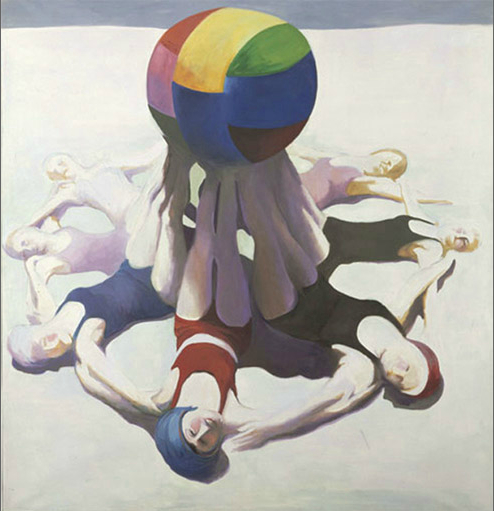 Lanyon’s life story is a microcosm of Chicago art in the mid-twentieth-century. She was a painter, printmaker, teacher, painting conservator, activist, feminist and, in the last year, chronicler of her generation of Chicago artists who graduated from SAIC in the late-1940s, the generation that just preceded the Monster Roster, when Chicago’s contemporary art scene was tiny. As she sorted her personal archives—binders of press clippings, exhibition announcements, manifestos and more—and readied them for the Smithsonian’s Archives of American Art, she spoke into a dictaphone and told the story of how Chicago’s art business grew up in the hands of its important collectors, curators and dealers, but also its artists. Ellen emailed me these transcribed texts so we could prepare her memoir together. Here is a finished paragraph, likely what she considered the opening of her book:

“It all began with a small majolica humidor in the form of a toad in a red waistcoat smoking a pipe. Grandfather Lanyon displayed such collectibles on the front parlor mantelpiece in the big house on 61st Place in Englewood, the South Side neighborhood of Chicago. There were other things as well on that mantel. A ceramic elephant, a Dresden shepherdess and her beau and two dogs cast in bronze who were occupied in fighting over a bone. Today, these objects reside in my cabinet of curiosities where they rest after having played a major role in one of my paintings.” 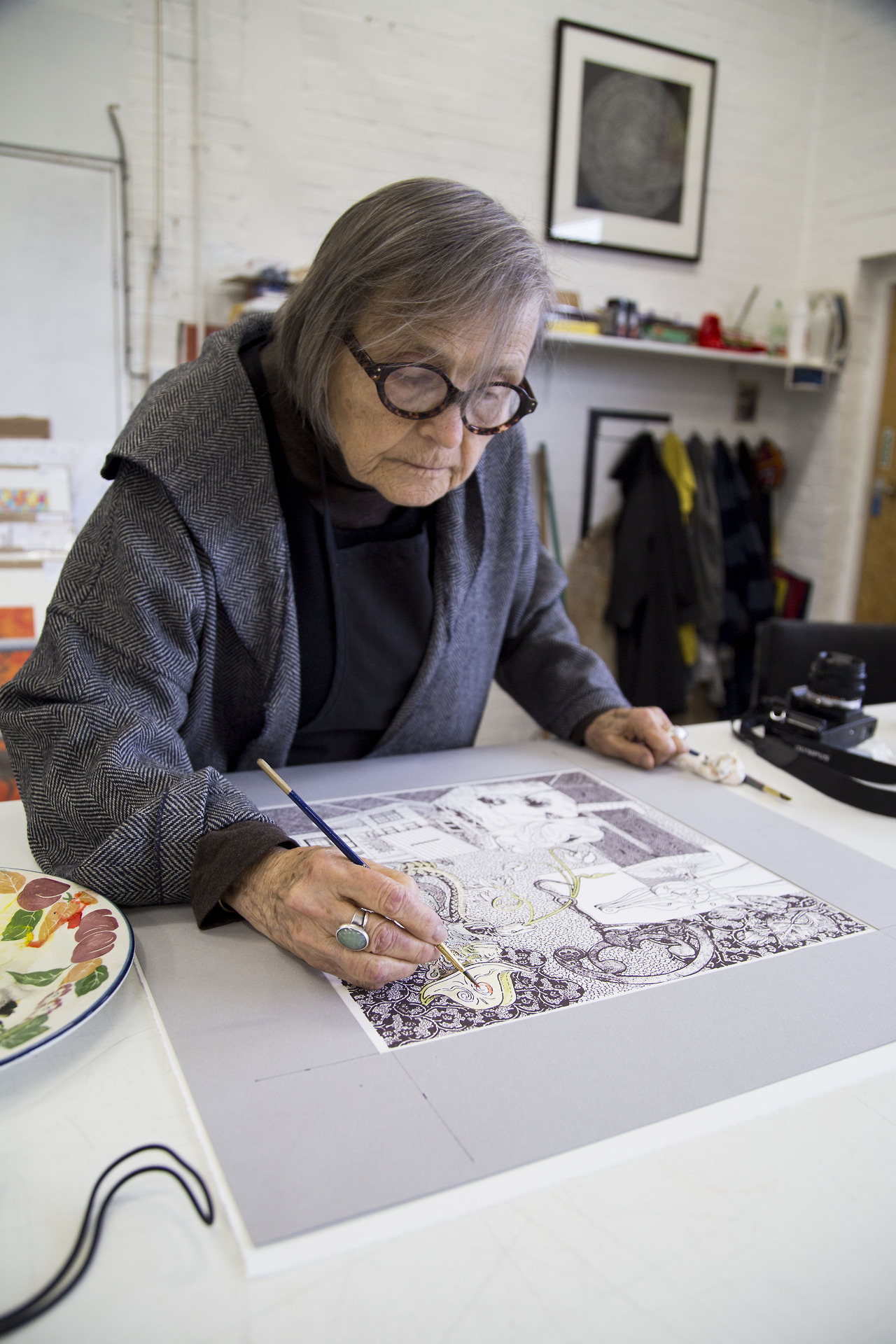 Working on her last print. Photo: Courtesy of The Print Studio, Cambridge.

A South Side Chicago native, Ellen permanently relocated to Manhattan in the 1980s, although she often returned to Chicago (and kept an apartment here) to attend the art fairs, give a guest lecture, or show her latest work at Valerie Carberry Gallery and Printworks. She was a regular on the scene. I can think of few other boosters of Chicago art who do not reside in the city.

By the mid-1960s, Lanyon solidified her presence in the Chicago community with Pop-like paintings of figures, mostly women, engaged in group activities. With her husband Roland Ginzel, Lanyon often attended parties and salons at collectors’ homes, many of whom collected European Surrealist art. She recalled seeing works by Dubuffet, Magritte and Ernst in Joe Shapiro’s home, and I think the legacy of Chicago’s collecting-obsession with Surrealism had a huge impact on her, as well as the other artists of her generation. We were “on the way to the Hairy Who and Imagism,” she told me—not quite there, but paving the way. Lanyon cultivated a love for Surrealist techniques and subjects, and worked them into her paintings.

Ellen told me once that the Institute for Psychoanalysis in Chicago collected some of her work. “The doctors loved weird paintings,” she said, but that one doctor “had a painting of mine in his office and he had to remove it when some patients came in because they got too disturbed.” 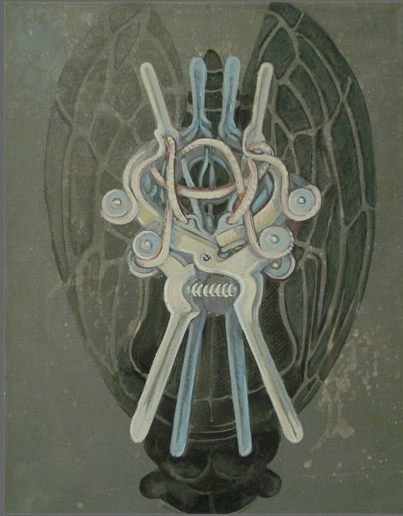 The history of Chicago’s artist-run spaces dates all the way back to Ellen. In 1948, she was a co-founder of Momentum, a student protest action and exhibition that was in protest against the Art Institute of Chicago. She spearheaded additional artist-run activities, such as Phalanx and PAC (Participating Artists of Chicago). Once, at an exhibition reception, Lucy Lippard convinced Ellen to open a Chicago chapter of W.E.B. (West East Coast Bag), a woman-artist national network that led to the formation of ARC and Artemisia, two of the first all-woman art galleries in Chicago.

Her work building SAIC’s Ox-Bow school, her public murals along Chicago’s Riverwalk, her founding of a print studio in the sixties—all of these (and more) are important chapters in Ellen’s life, and in the lives of Chicago artists.

“Ellen and I had become quite close over the past decade, and worked together not only on matters such as donations to the MCA Archive, but personally, most notably with our book ‘Ballary Marvels,’ a volume of poems inspired by the uncanny environment of old tools and object d’art she created at her studio where I always stayed when in New York. I’d seen her right before her trip to England; she was keenly looking forward to it. I cannot believe she is so abruptly gone. The Chicago community was inestimably enriched by not only her art, but her indefatigable energy at bringing people together and maintaining a huge network of personal and professional relationships. She was a personal role model for me of how a woman can successfully make her way in the often competitive and challenging art world, and be graceful and stubborn in the face of the accumulation of years.”