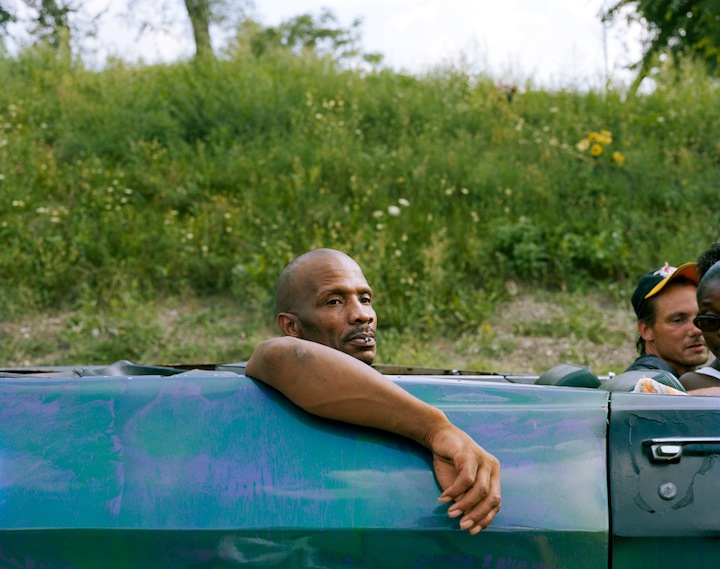 “Mike and Doug,” 2010. Courtesy of the artist and Stephen Daiter Gallery, Chicago.

Back in the day, as a young social photographer, Paul D’Amato went out into Chicago’s black and Hispanic neighborhoods with the wish of so many of the young middle-class white males of his generation: to connect with the homies or, as sociologists say, to get a shot of “prestige from below”—mean, tragic and vitalizing street style.

Now middle aged, D’Amato has continued to hang around the ‘hood, but he has shifted his approach to the more restrained and sedate project of shooting color portraits of its residents. D’Amato’s images place his subjects in their own environments, but they are decidedly formal and still, as though the subjects were in the studio.

D’Amato never became a homie; he stayed, but he retreated to the role of the photographer who comes to the scene with the practices from whence he came. That perhaps harsh judgment can be readily confirmed by examining the representation of D’Amato’s subjects.

In all of the twenty-four portraits, the African-American subjects, whether young or old, or male or female, have exactly the same expression on their invariably closed lips—a stoical look suffused by more than a hint of sourness and a bit of a hostile edge that gives them “attitude,” but not too much. In the balance between the photographer’s and the subject’s contributions to the representation, it is clear that the photographer is in control here; such uniformity of expression would be impossible otherwise.

D’Amato also seems to have retreated from his early zest to partake of the wild side; most of his subjects are ordinary people, in ordinary dress, living presumably ordinary lives. Perhaps this is a way of humanizing the ‘hood and still showing that life there is tough. Only once does D’Amato give us a glimpse of what he used to be; we see two older macho tough guys parked in a blue convertible next to an overgrown patch of weeds, both of them sporting the D’Amato look, but one of them at least with a cigarette stuck in his pursed lips. (Michael Weinstein)

Through November 24 at the DePaul Art Museum, 935 West Fullerton.

I am compelled to respond- in order to perhaps begin a dialog about some of the issues mentioned. I believe that this is a very important series of portraits. D’Amato’s earlier work was a different (less developed?) stye than these pictures. These are slower. I like to see growth and change and movement within an artist’s career- not the same thing again and again. Is there something that makes a viewer uncomfortable with this new, very close series of portraits taken over a long period of time? What about the issue of displacement from Cabrini Green? The mark-making, abstract images… Read more »

I can’t let Mike Weinstein’s review of the current exhibition of Paul D’Amato’s photos pass without comment. Mike apparently views the work as some sort of pretentious art/sociology project in which the subjects are manipulated and exploited in order to provide the photographer with edgy thrills. This view casts D’Amato as naïve and possibly unprincipled. Worse, it deprives his sitters of perceptiveness and autonomy, whereas in fact they have a sophisticated and highly nuanced understanding of the social transactions around the photography project and exert the degree of control they want. D’Amato and his subjects collaborate to choose their setting,… Read more »

The making of a portrait is always a complicated proposition, freighted as it is with the individual’s sense of self, the photographer’s sense of the subject (which is no doubt different from the subject’s self-perception), and the way the viewer ends up bringing his or her own subjectivities to the viewing experience. To the degree that there is some difference between subject and photographer–whether a difference of race, class, age, gender, sexuality, or some combination of these–the equation is further complicated and the way the work comes to exist in the world becomes that much more complicated. These differences are… Read more »

This review baffles me. From the dismissive use of the word “hood,” to the summary of all the portrait subjects as having the same expression, a “stoical look…suffused by more than a hint of sourness and a bit of a hostile edge that gives them “attitude.” Did this writer actually look at this work? Does he know who these people are? Is he actually saying that Pastor Cleophus Lee has a sour hostile expression with just enough attitude? Does he have an inability to recognize facial expressions or is that ability simply eclipsed for him by race and class? Does… Read more »

Since several people have already discussed the identity politics of both photographer and reviewer, and because Dawoud Bey has also vividly outlined the complicated process of making photographic portraits, I will not belabor those points. I would like to state, however, that Mr. Weinstein fails to recognize Paul D’Amato’s brilliance in the making of large-format photographs; the inherent qualities of this type of picture making and it’s relationship to portraiture, in particular. While the reviewer criticizes the photographer’s apparent control of the process, it is, and has always been, a fallacious argument that photography is anything but a constructed proposition.… Read more »

I hesitate to pile on here, but I, too, am baffled by this review. Social documentarians and cultural critics alike run the risk of careening into many pitfalls in the course of doing their work, some of which include clinging to ingoing assumptions, treating their subjects glibly or otherwise disrespectfully, and spending too little time familiarizing themselves with complex subject matter. Paul D’Amato’s exhibition demonstrates that he has assiduously avoided these missteps, while our reviewer has managed to clumsily tumble into all of them here.

The commenters here, like all of us, are bringing their conceptions of race and their friendships with the photographer into their interpretation. There’s nothing wrong with that. But, I see the reviewer’s point much more clearly here. I loved Paul’s earlier work but this work is not as compelling. Is that because the subjects are black and he is white? No. It’s because I don’t see the “pensiveness, calm, warmth, dignity, intelligence, and focus” in the photos or D’Amato’s “familiarity with complex subject matter”. Maybe he has real political engagement with the subjects that makes this work more interesting than… Read more »

The reviewer seems to have been responding to prominent signage in the gallery telling us the artist “aspires to narrow the divide between his and his sitters’ subjective experience in order to create photographs that are at once genuine and aesthetically engaging” To me, the opulent brilliance of the well composed color prints contrasts sharply with the dead-end lives of the subjects. Do any of them appear to have a rich inner life or prospects for success in this world? They all seem a good fit for the defeatist title given to the exhibit: “We Shall” – without the “Overcome”… Read more »