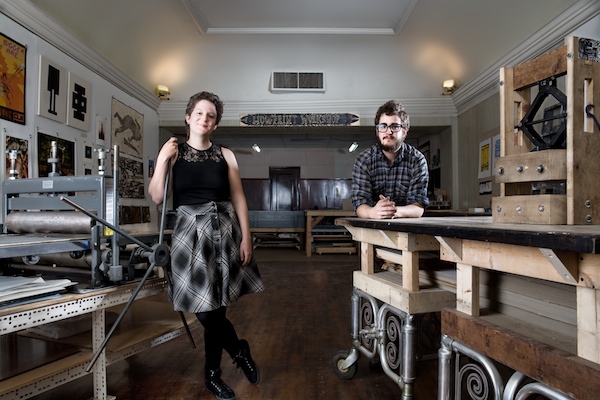 Pilsen’s growing art community has a new addition. Hoofprint Workshop, a gallery, printmaking press and studio sited in a repurposed funeral home, is the brainchild of local printmakers and teachers Liz Born and Gabe Hoare.

The pair’s first curated installation, on display through November 23, is an explosion of styles, themes and techniques, held together by a mutual commitment to cross-disciplinary collaboration.

“We have worked with four artists this past year as a part of our Collaborative Publishing Project,” says Born, including John Himmelfarb, Polly Yates, Sandra Perlow and Gabriel Villa. “Works from this endeavor are displayed on the south wall of the gallery, alongside non-print works by the same artists. The north wall of the gallery features artists who we’d like to work with more closely in the future. We chose to display their work not only because we think it’s fantastic, but also to give viewers at our opening an idea of what the future holds; something to really sink their teeth into.”

Some standouts from Hoofprint’s opening include the sculptural prints by Perlow, who is primarily known as a painter, but expanded into intaglio and relief for this show; satirical lithographs by Pilsen favorite Eric Garcia, and some eerie, large scale lithographs inspired by medieval relic-worship from Aaron Coleman. 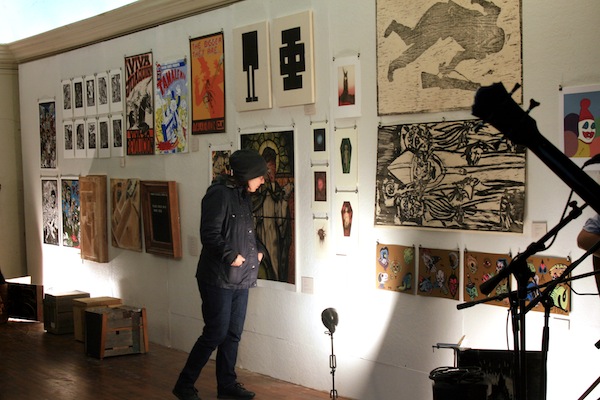 Hoofprint’s inaugural event was meant, in Born’s words, to “impress upon viewers a sense of generosity. We’d like to provide a laid-back, approachable atmosphere, whilst simultaneously conveying an uncompromising attitude toward craftsmanship.”

Hoofprint Workshop as a studio will be devoted to helping other artists expand their skill sets. Set up by appointment only, artists will be able to take one-on-one classes with either Born, who is a graduate of SAIC and specializes in relief printing, or Hoare, who cut his teeth at Tandem Press in Madison and is skilled in both intaglio and lithography.

There will be no digital production at Hoofprint: “We’re interested in traditional printmaking processes like litho, etching and woodcut. These tend to preserve things like texture, subtlety and line quality, which are the autographic mark of the artist. The more direct it is, the closer it is to the artist’s hand in a way that digital art can’t quite capture,” says Born.

As gallery owners, Born and Hoare are less committed to commercial accessibility, preferring to showcase work that they believe is beautifully crafted and evocative, regardless of its popularity.

After spending several years working on the North Side—Hoofprint was first established in a Bucktown apartment while Born was teaching at Spudnik Press—the pair are excited to bring their talents down to the Pilsen area.

“While there is a long history of printmaking in the area, as far as we know, there aren’t any other semi-public studios devoted solely to making and showing prints,” explains Born. “A lot of artists in west Pilsen have to go up to Spudnik to print their stuff.” (Meredith Wilson)