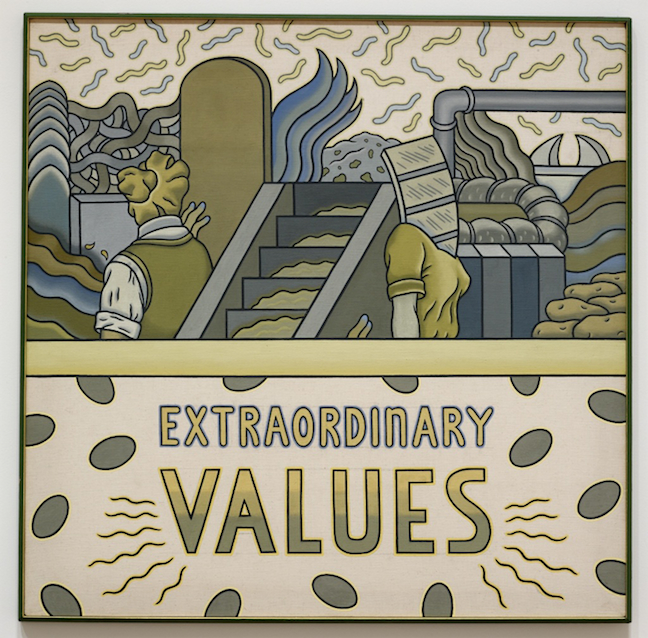 Tracing paper might be the biggest art-store seller in the Midwest. Midwestern artists lift, borrow and reuse source material from other artists and cultures so frequently that there is now a handful of current exhibitions dedicated to this topic. The art world calls it appropriation, and it is a ubiquitous creative strategy among contemporary artists, but when the Met canonized this practice in their 2009 show “The Pictures Generation,” they focused only on the coasts. Appropriation, however, is a Midwest tradition, even to the degree that Carl Baratta used to teach a course at SAIC called “How to Steal.”

When longtime SAIC professor Ray Yoshida died in 2009, the school that he taught at for forty-five years hosted “Touch and Go: Ray Yoshida and his Spheres of Influence,” a sprawling exhibition of artwork and objects that fanned-out Yoshida’s network of sources and peer influences, and explained how the Chicago Imagists pinched from folk artists and from each other. It was an expansive show, but not exhaustive. Completing that task is “Ray Yoshida’s Museum of Extraordinary Values” at the John Michael Kohler Arts Center in Sheboygan, Wisconsin. 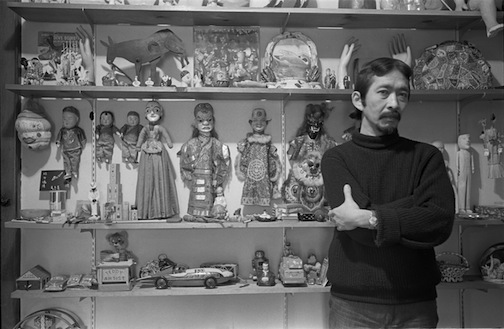 Ray Yoshida with his collection.

The museum, which specializes in collecting vernacular art and entire artist environments, recently acquired the contents of Yoshida’s total art collection. Folk art, tramp art, toys, masks and more (much, much more) are displayed in bays according to arrangements from photographs and a documentary video of Yoshida’s Bucktown apartment and studio.

The exhibition recalls the Roger Brown Study Collection, as the two artists collected similar types of objects from self-taught and often unknown artists, but the display of Yoshida’s two-thousand objects in the clean, white gallery is also reminiscent of an Egyptian pharaoh’s excavated tomb. There is so much paraphernalia to decode here. Careful observers will enjoy looking at Yoshida’s collected objects, holding the form in one’s head, and then turning around to see it transposed by Yoshida in his abstract paintings that line the gallery’s perimeter.

The museum’s new curator, Karen Patterson, a recent graduate of SAIC, makes Yoshida’s collection more comprehensible. “Yoshida would have viewed his collection as having thing-power, the evocative yet elusive stimuli finding their way into paintings,” writes Patterson in her excellent and insightful catalog essay. I asked Patterson how Yoshida decided what to buy for his personal collection. Yoshida responded to a made object’s “elegance or awkwardness,” she said. Yoshida was an “early and firm supporter of self-taught artists,” Patterson said; “this is a Midwestern story.” Indeed, each bay of objects tells a story about who Yoshida was based on the diversity of his collection. 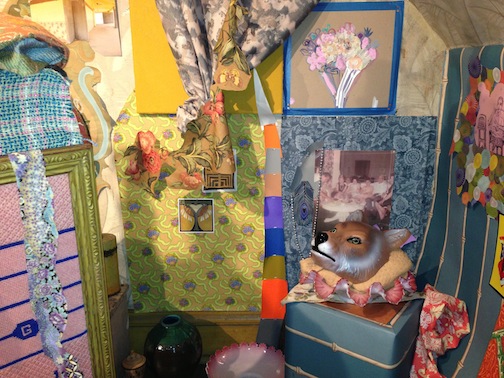 Lauren Ball married into the Chicago Imagist tradition—her father-in-law is Karl Wirsum—and her painting process picks up where the Imagists left off. “I incorporate objects from other artist’s collections. They’re the source material for my paintings,” she explained over the phone. In the attic gallery of SideCar, Ball displays her paintings among these borrowed and gifted objects in an installation titled “Replacing the Uninvited Muse,” including apothecary jars, thrift shop finds, a Darth Vader plastic figurine, and textiles she collects from around the world. Combined, the objects create “a visual currency that no one can really own,” says Ball.

Hotdog art bookends Michelle Grabner’s newly curated show about Midwestern appropriation, but the clichés end there. There are few direct, unaltered lifts in “A Study in Midwestern Appropriation.” The most surprising element of Midwest appropriation is how handmade everything is. This is not the work of the New York school. There are few cool, sly remakes of preexisting objects, as one might find with Richard Prince or Jeff Koons. Tony Tasset’s gigantic, dancing, dripping-penis “Hot Dog Man” sculpture could discipline a Koons puppy any day. 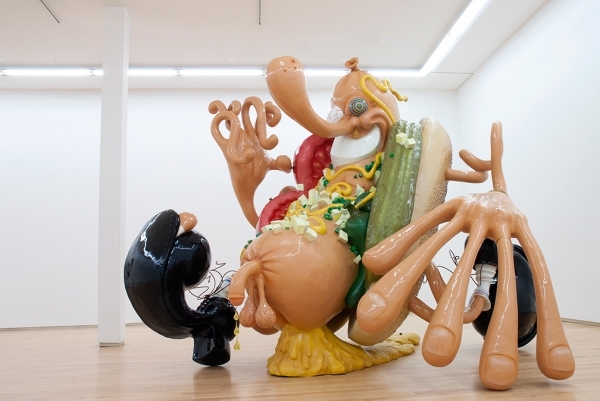 With forty artists, the show is crowded, but for a reason. Without any wall labels identifying who made what, the exhibition appears like a cabinet of wonders so that viewers must pick out what they respond to visually, like Yoshida at home with his folk art collection. Not all of the work is excellent, but to think of the exhibition as a mass of messy parts rather than a showcase of discrete masterpieces is akin to other Chicago Imagist object collections where high and low, good and bad are leveled.

The exhibition also blazes a path for a new kind of appropriation, one that is very unspecific. The references are often hidden. Evan Gruzis’ “Private Screening No. 2,” for example, appropriates the technique of tie-dye, and the size of his canvas appropriates the size of a widescreen television. This is not image-appropriation as we have known it for the past thirty-odd years, but something else entirely; something refreshing.

“A Study in Midwestern Appropriation” shows through January 12 at the Hyde Park Art Center, 5020 South Cornell.