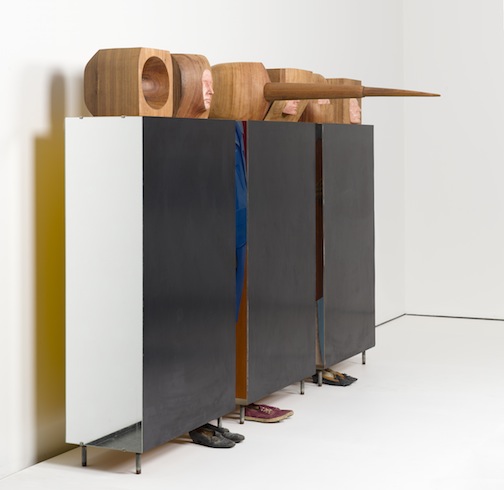 Marisol’s place in the public consciousness of fine art—if such a thing can be said to exist, somewhere between the Old Masters and Basquiat-obsessed rappers—seems mostly to be as a personification of good friend Andy Warhol’s hoary prophecy in regards to the approaching ubiquity, and short duration, of fame; the minuscule collecting of the two artist’s works at the MCA—just three apiece—instead seeks to explore the more reciprocal aspects of their relationship, even leaning a bit toward the sculptor’s side.

The fledgling influences of Pop art manifest themselves in Marisol’s sculptures in ways both esoteric—the use of primary colors; prolificness of found objects, although she avails herself to these for the context they can add to her works, oftentimes being private possessions of the subjects, rather than the abstraction driven by their presentation removed from their frames of reference—and blatantly, intimately obvious, most notably her portrait of Warhol himself, in the shape of a throne.

For Warhol’s part, it would not be much of a stretch to find the Kohl-eyed beauty of the sculptress Marisol in machine-gun repetition of Jackie Kennedy faces (in “Jackie Frieze”), and, if his publicly noted obsession with Marisol’s glamour factor (he is quoted as saying “Marisol! The first girl artist with glamour,” in Grace Glueck’s 1965 New York Times article) is extrapolated only slightly, one can understand how the smoldering glare of “Troy Diptych” could relate. Warhol’s photograph “Marisol Sculpture of William Burroughs” lays it all out, really; part of a series honoring her influences, the seminal Beat author is rendered as regal furniture in the same way Andy was.

Those drawn to the exhibition by Warhol’s name will most likely be disappointed; the ones who can get over it will find a small but compelling sampling of reasons why Marisol deserves to be appreciated in ways beyond the axiomatic. (B. David Zarley)