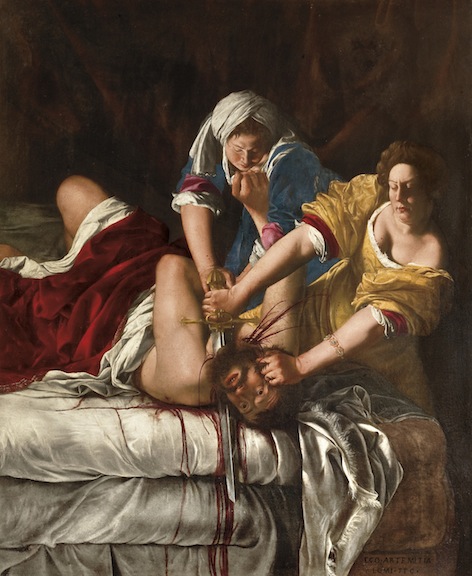 What artwork would you pick if the Foundation for Italian Art and Culture offered to facilitate the loan of a masterpiece from an Italian museum? Assuming that not everything is going to be on the table, the Uffizi’s “Judith Slaying Holofernes” (c. 1620) by Artemisia Gentileschi would be a damn good choice. Chicago once had its own feminist art gallery inspired by the proto-feminist Gentileschi, called Artemisia Gallery that ran from 1973-2003.

The victim of both a rape and a sensational trial-by-torture at the age of eighteen, Gentileschi painted her first version of Judith the following year, borrowing heavily from the explicitly violent version done by Caravaggio. It was a theme she would revisit four times in her career. About eight years later, she did a modification of that first version, aging the face of Judith just as she herself had aged, and moving the bloody sword to the middle of the canvas, triangulating it between the victim’s knee and the determined woman’s outstretched arms. Wow! The murderous action really falls off the wall. Even Caravaggio’s blood-spurting tableau seems peaceful by comparison.

This is not the kind of work done by her father and teacher, Orazio Gentileschi, whose idyllic, luscious “Lute Player” visited the Art Institute in 2010. And it’s the exact opposite of the gorgeous and rather humorous version of Judith that came to Chicago in 2002, painted at nearly the same time by Artemisia’s Florentine colleague, Cristofano Allori.

“Judith Slaying Holofernes” is not a pretty painting. It is not a gently humorous painting. There is neither ambivalence nor delicate forms, lines, tones or balances to savor. Beginning in the fifteenth century, the subject was often visited by easel painters, sculptors and printmakers. But unlike the dozen alternative versions that accompany this exhibition, including a rarely seen Cranach painting, Gentileschi’s image does not present Judith as a demure model for righteous feminine behavior or as a David/Goliath political symbol of the weak defeating the strong.

“Judith Slaying Holofernes” is the kind of theatrical art that demands a response and refuses to serve as a decorative background for elegant living. Yes, this was a good loan for the Chicago of Ivan Albright, Leon Golub and Wesley Kimler. Seeing it represented in books or on a computer does not do it justice. It needs to intrude on your actual living space. (Chris Miller)

Through January 9 at the Art Institute of Chicago, 111 South Michigan.