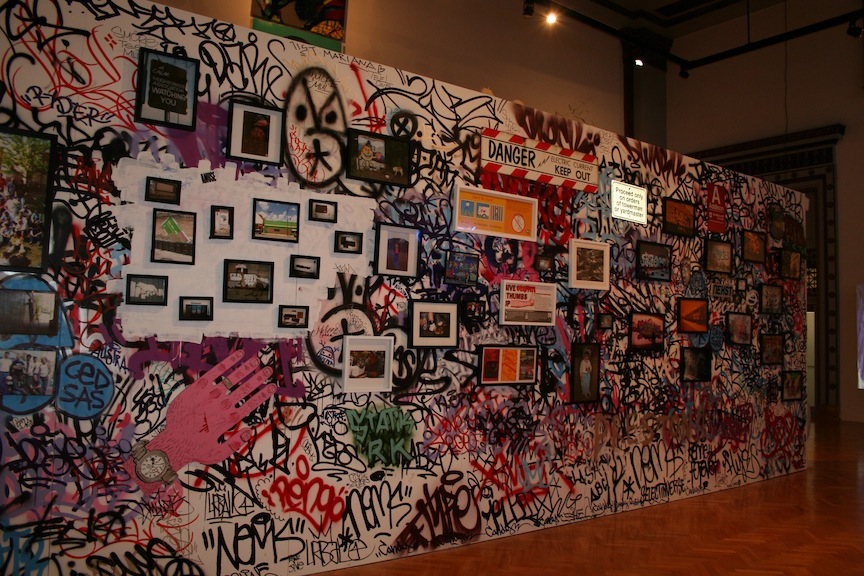 “I bet most of the people here,” including most of the artists, “have been to lock-up at some point. And I bet there are a lot of undercover cops here,” remarked an acquaintance and one of the participants in “Paint Paste Sticker: Chicago Street Art” at the opening of the exhibition at the Chicago Cultural Center. That remark points to a big part of the success of the exhibition: the palpable tension among the art on view, the anti-vandalism laws of the city, and the intensely official civic institution that hosts the exhibition.

The exhibition’s entrance greets visitors with one of the city’s recognizable bus shelters completely covered in spray-paint executed with a recognizable Zore design. Inside is a long wall covered in artist’s stickers, tags, paste-ups and other objects that you usually see on private property across the city. It’s a virtual who’s who of Chicago sticker art with artists adding their calligraphic, tagged signatures, quick sketches or small drawings to a variety of stickers that were intended for more mundane tasks like shipping, or gathering dust at the Post Office. The wall also includes signs from the CTA such as third-rail high-voltage warnings and public service messages. These might come off as cheesy in a street art exhibition, but in the context of a city-sponsored show, the appropriated signs have a sharp edge.

Displayed neatly framed on the chaos of the sticker wall, an anti-vandalism ad sums up the tension of the street art exhibition’s site on city property. Featuring a stick figure named Jack who inevitably ends up behind bars after spray painting his name on a van, the ad narrates: “Vandals like Jack cost you more than $4 million each year in cleanup costs. If caught, vandals will be prosecuted to the fullest extent of the law.” The ad invites us to inform on fellow citizens, advising, “But you can help, too. Call 911 to report vandalism in progress.” The ad concludes above a second picture of the stick figure behind bars, with the text, “Don’t be Jack.”

The spray-paint-wielding Jack indicates another strong point of the exhibition, that it does not define or limit the “Chicago Street Art” of the title to a particular medium or approach. Too often street art is subtly defined as predominantly wheat-paste posters, stencils or stickers, paying less attention or wholly ignoring their unruly big brothers (or fathers?), spray-paint-based graffiti and tagging. At the Cultural Center we see a comprehensive and ambitious overview of all the forms of street art, even progressions within certain forms, and the exchanges between them.

Does this mean that the city of Chicago has a newfound appreciation for what street artists are doing? Could the politicians of Chicago be leading other major cities by recognizing the artistic merit and value of what’s clearly one of the most important, cohesive and widespread artistic movements today? Let’s hope so, if Alderman Danny Solis and his street-art mural projects represented in the exhibition by photographs, are any example. (Abraham Ritchie)

Through January 12 at the Chicago Cultural Center, 78 East Washington.