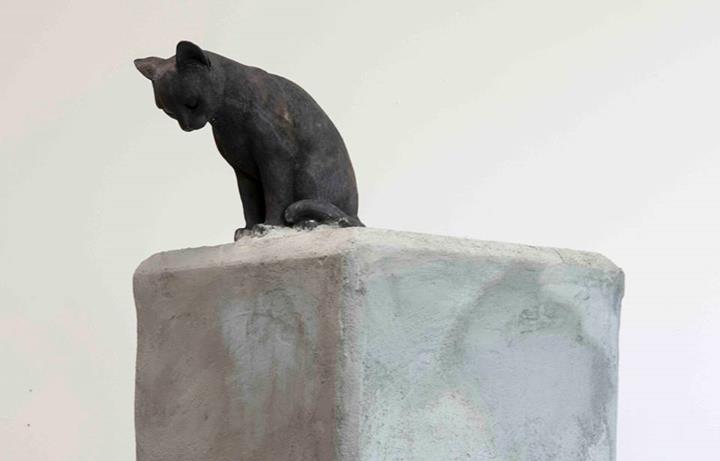 “If you build it, he will come.” This infamous line from the movie “Field of Dreams,” prophesying the arrival of baseball players to an empty playing field, sums up the exhibition now installed at Terraformer’s outdoor exhibition space in Bridgeport—except, in this instance, “he” refers to feral cats.

“The Terraformer Advancement Towards Interspecific Communication” is the brainchild of Medicine Cabinet and Sofa King galleries founder Christopher Smith. According to the project’s manifesto, the show is “an initiative focused on expanding the audience for art from a specifically human one to an audience that transcends species.” After careful “ethnographic” research, seven artists constructed and installed their architectural solutions for the sheltering and feeding of feral and stray cats.

But are cats the audience or the unwitting participants in a staged human intervention? The site is an empty lot laden with an unfortunate past (two deaths and a devastating house fire) and ripe for creative use. The shelters range from cat-sized pyramids, inspired by ancient Egypt’s cat worship, to a candlelit and lace-carpeted cathedral. Placed at the highest point on the lot, the church’s cardboard rose window preaches abstinence, an ironic mandate falling upon the rapidly breeding, disobedient ears of instinct-driven animals. A mismatched wooden cottage slumps on a chain-link fence. Another Crayola-colored structure sticks out a red carpet tongue. In the center, a melancholic housecat sculpture consecrates the space atop a giant, concrete monument.

Unlike charitable animal rescue organizations that focus on spay/neuter/release programs as a humane approach to managing feral cat colonies, Terraformer is not attempting to interfere with the cats’ lives. Instead it aims to insert innocuous way stations meant to facilitate their survival.

The exhibition allies itself with Chicago’s long history of social practice art. It gives a nod to local artists’ projects, such as Michael Rakowitz’s paraSITE shelters, custom built for the homeless.

Whether or not this luxe trailer park will lure the cats is yet to be seen. The food will surely draw animals—likely mice, rats, bunnies and squirrels—but will it bring the cats? The reason we love cats is for the same reason they frustrate us: fickle, enigmatic and downright resistant to human interference, they just don’t give a fuck.

Nevertheless, Terraformer’s humanitarian efforts should not go unappreciated. In a world colonized and parceled out by humans, any attempt to make space for fellow animal occupants deserves a hearty applause. (Amy Zahi)

Terraformer is located in the vacant lot directly south of 3216 South Morgan.