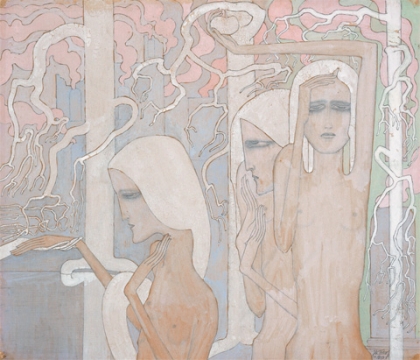 Jan Toorop, “A Mysterious Hand Leads to Another Path,” 1893. Promised gift of Celia and David Hilliard.

“If Girtin had lived, I would have starved,” declared J.M.W. Turner, one of the iconic painters of the nineteenth century. But who was Girtin? One of his watercolors can be found in the collection of David and Celia Hilliard, longtime Chicago collectors and Art Institute supporters, now on display in the Prints and Drawings gallery at the museum.

When was the last time you saw an exhibition of contemporary Romantic landscapes in a major American art museum? Several great, but lesser known eighteenth-century British watercolorists are in the Hilliard’s collection, such as Cornelius Varley’s 1801 rendition of bleak old Conway Castle, complete with withering tree. The artwork is a fine example of the kind of things the Hilliards have collected in their jaunts though the less traveled byways of European art history. They like things that are dark and moody, especially the Symbolist predecessors of Surrealism. Among contemporary artists, their great discovery was an atmospheric charcoal from remote Cranberry Island as rendered by the living American artist Emily Nelligan. 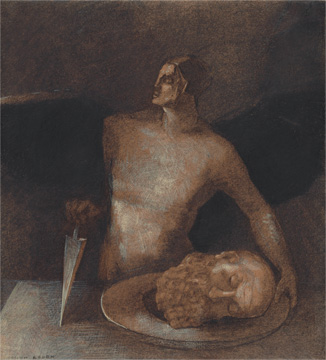 Recently, the Hilliards have added sculpture to their collection, but dark or macabre visions seem better suited for two-dimensional works where they are more like visions of an imaginary world rather than intruding into the space, light and air of our own. The dramatic chiaroscuro qualities of late-Romantic sculpture is best exemplified here by the brooding, bat-winged “Satan” modeled by Jean Jacques Feuchere (1807-1852). Even the pastel-colored, glass-paste nude relief by Henry Cros (1840-1907) seems to belong in a mausoleum, though its painterly qualities must have fascinated contemporaries with a resemblance to the Impressionism of Renoir. (Chris Miller)

Through February 16 at the Art Institute of Chicago, 111 South Michigan.