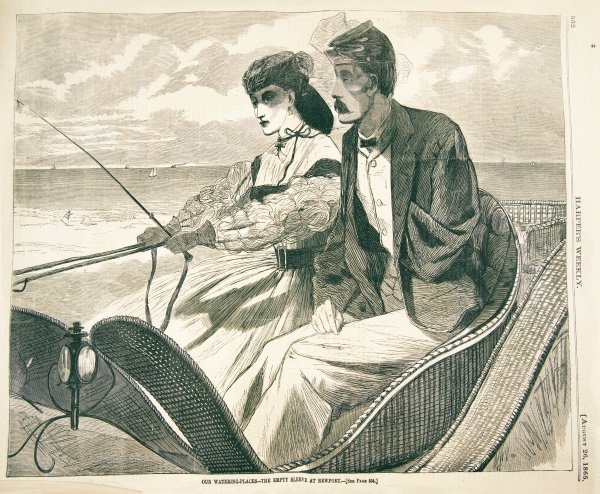 There was a time when America’s sectional differences were settled with guns, not merely squabbles in Congress. The Newberry Library’s current exhibition, “Home Front: Daily Life in the Civil War North” highlights an oft-forgotten aspect of this country’s greatest crisis. The dim lighting and genteel surfaces of the Newberry resemble a Civil War-era parlor. But this is where the northern home front was waged—in homes and in the fevered minds of soldiers’ families.

Visual and textual material abound in four galleries—pamphlets, photographs, a woman’s gown, patriotic envelopes, broadsides and (what else?) plenty of books. As now, the Civil War era was awash in media. The YouTube posts of their day, sheet music is here in abundance, too, and the Chicago firm of Root & Cady provided many of the hits. At once naïvely patriotic and intensely sad, one is entitled “Dear Mother I’ve Come Home to Die.” Several important oil paintings from the Terra Foundation for American Art’s collection (they helped fund and organize the show) lend color and clout. Here visitors can handle stereographic (3D) viewers and a “myriopticon,” one of the first toys produced by the Milton Bradley company, a child’s hand-held theater of a battle scene.

Examining the home front means necessarily examining the role of women, a good thing since the Civil War has often been treated as a man-story. The show also highlights the overlooked  agency of African Americans in the war effort. Similarly, the Civil War has blinded us—as it did people then—to the plight of Native Americans. A chilling newspaper illustration depicts the enormous square gallows used to hang thirty-eight Sioux in 1862, the largest mass execution in our history. The show is filled with such surprising history. Throughout, references to Chicago make the home front seem even more local.

Overall, the patience required to look at these objects and imagine a loved one in a distant battle is richly rewarded. For many American families in the recent past, it won’t be that difficult. (Mark Pohlad)

Through March 24 at the Newberry Library, 60 West Walton.