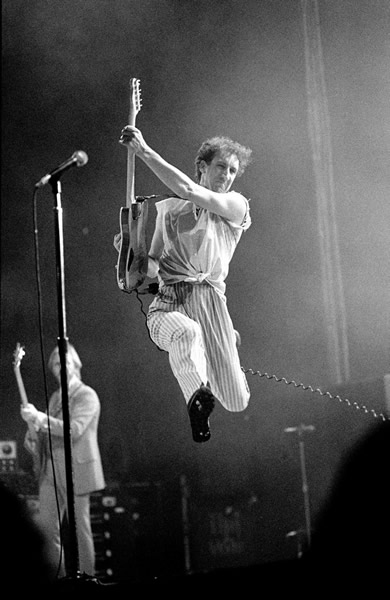 All the hype and excitement that attend a massive rock festival are in full force at this exhibition celebrating the thirty-seven-year career of Chicago’s very own world-class rock photographer Paul Natkin, who has shot all the stars from every genre, always seizing them at their most energetic and vibrant, even when they are posing for celebrity portraits. The show is dominated by large-format mega-posters of Natkin’s performance shots, which are his forte; he not only puts the viewer into the heat of the action, but he does so by capturing expressive moments which create a sense of intimacy. The lavish curating is well deserved; the images deliver on the hype. The show is dense, even though it takes up two rooms; there are album covers, publicity shots, photo-journalism, sensitive portraits, music streaming through the space, and opportunities to listen to Natkin telling the stories of the photographs. Wander through it all as you would at a festival, stopping to tarry at your faves, anyone from Muddy Waters and Bob Marley to the Rolling Stones, Ozzy and Randy Rhoads, and Iggy Pop and Joey Ramone, in front of you as you would most like to remember them. Look at Tom Petty in concert at the zenith of a leap, his eyes slit and lips drawn tight, radiating extreme effort; it is something we could never see had Natkin not frozen it in a still. The show reveals what a consummate rock photographer contributes to the total experience; rock is nothing if not action, yet the intensity of it is most effectively crystallized in a still, which arrests what passes all too quickly on stage and which cannot be posed. Natkin says that his secret is to be as alert and intense as the performers, anticipating the instant at which they will reach their peak. He made his fame by bringing the great Henri Cartier-Bresson’s “decisive moment” into a world where a sharp and penetrating eye can intuit it. (Michael Weinstein)

Through January 4 at the Chicago Cultural Center, 78 East Washington.