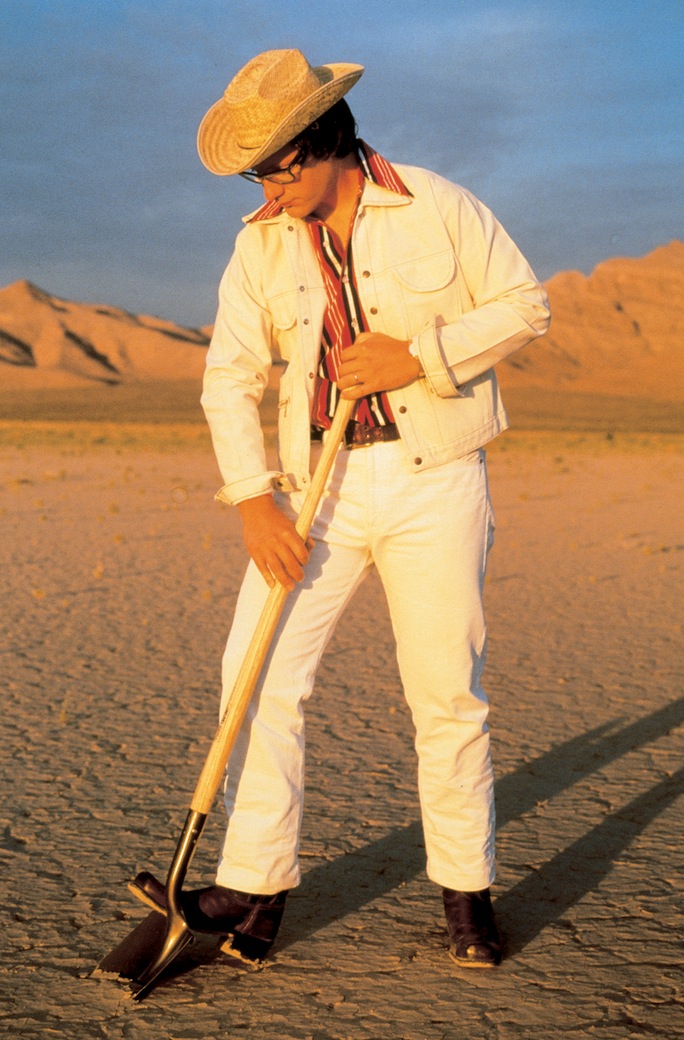 The exhibition begins on the left, and ends nowhere. The MCA’s expansive new group show, “The Way of the Shovel: Art as Archaeology,” bores wormholes through the Rocky Mountains, to Baghdad and Belarus and over the North Pole, through the psyche and into the past. “The past is a foreign country,” wrote L. P. Hartley, and artists are explorers. This is the guiding theme of curator Dieter Roelstraete’s exhibition, which tasks itself with explaining nothing less than the history of the Western world—and who has access to it. The ambitious exhibition with an international roster of artists is “a philosophical speculation,” explained Roelstraete at the media preview. Roelstraete’s show proposes that artists create art, and make meaning, in a new way. That is, artists dig, uncover, exhume, mine, bring to light (and other “digging” synonyms) issues and characters from the past. What artists find (artifacts, secrets, ghosts) is of equal importance to how they found it (research, inquiries, investigations). There are no accidents in this show, only strategies. 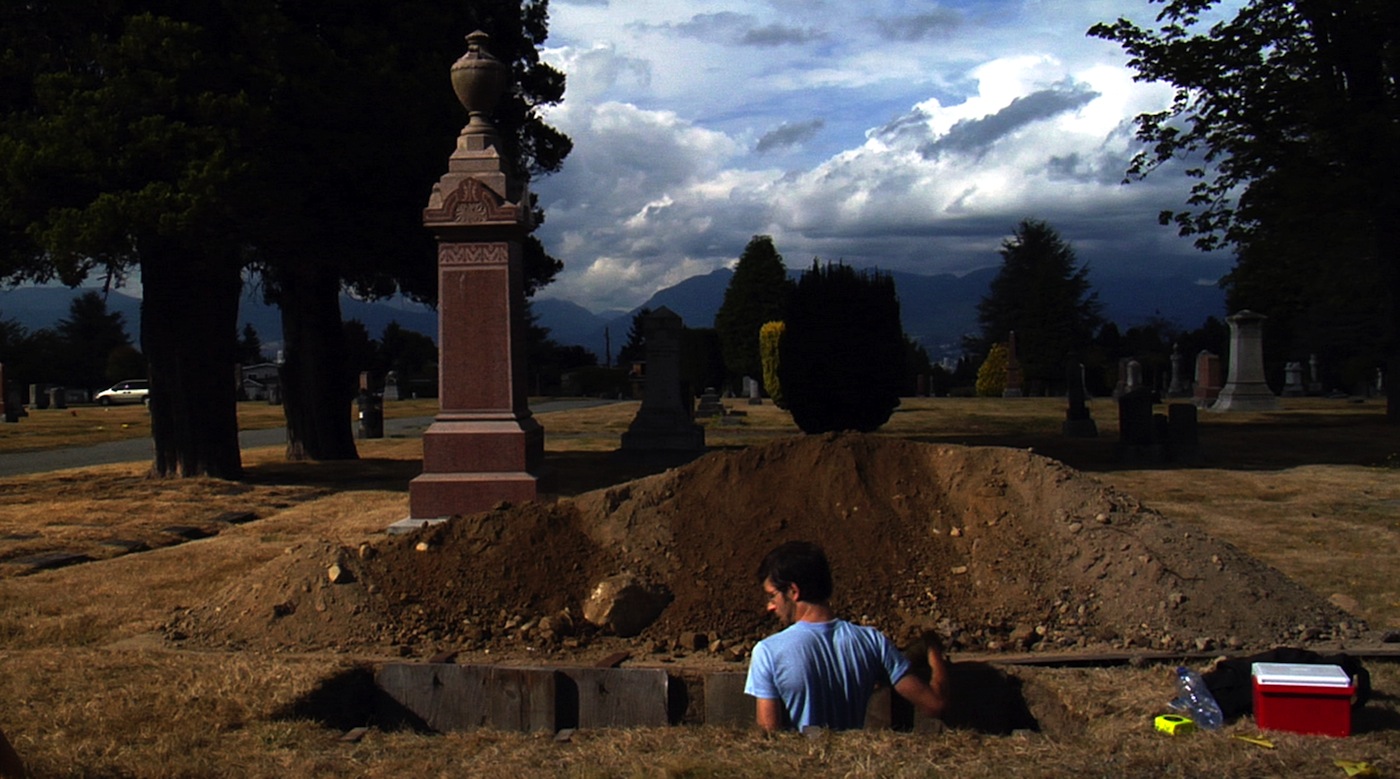 More than seventy artworks are spread methodically across the museum’s entire top floor. Most of the art was made after 9/11, a benchmark of history forevermore. Along with literal representations of digging (Mark Dion’s shovels, for instance), there are 16mm films and slide projectors that say: I am educating you. (You can learn about Rosa Luxemburg, the transatlantic telegraph cable, Arctic explorers and contemporary ruins in Detroit, Chicago and Pittsburgh, for example.) The show includes nearly four-and-a-half combined hours of video and film. 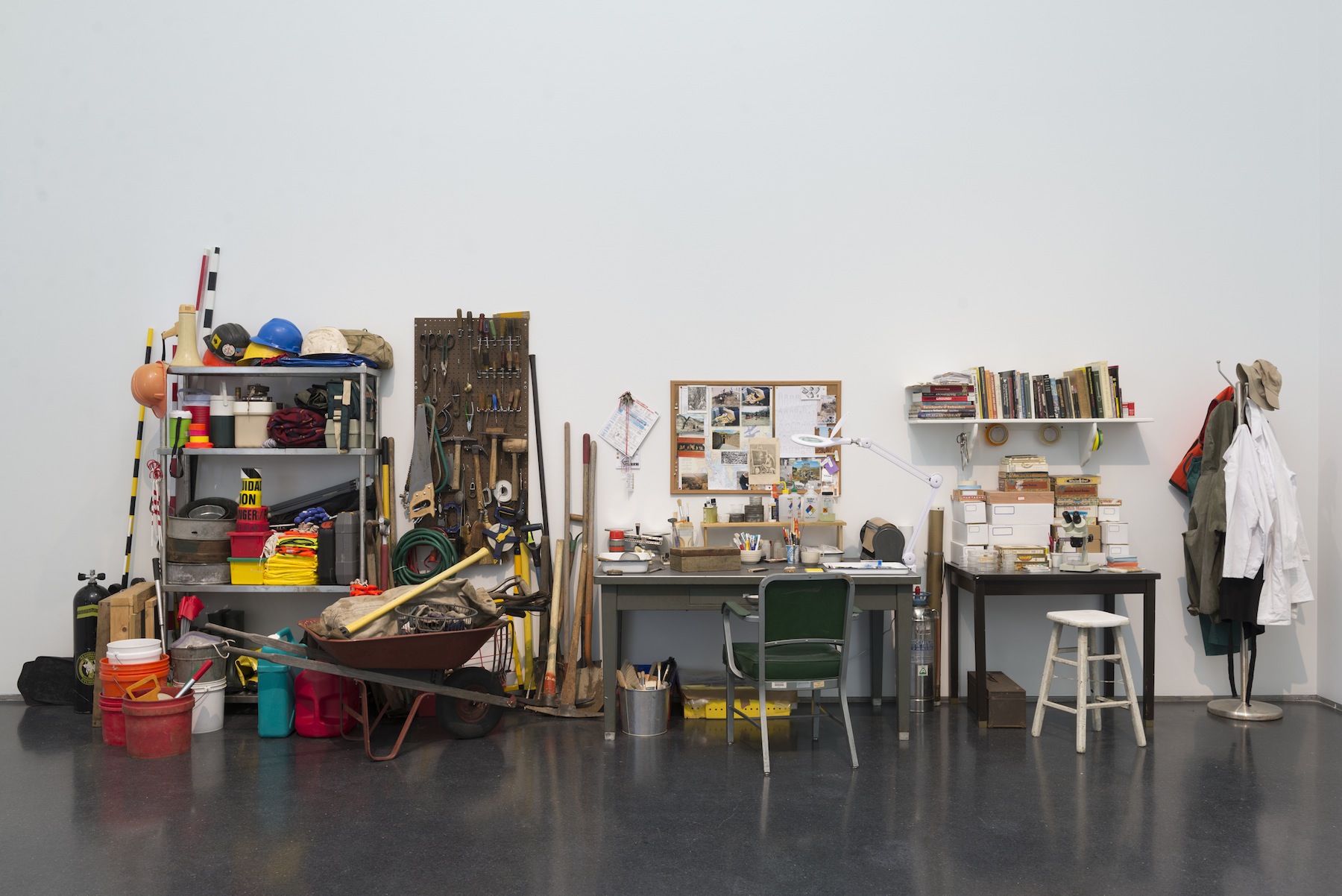 For an exhibition heavy on resurrection metaphors, it is decidedly absent of religious and spiritual implications. Instead, the role of the gods are played by Sigmund Freud and Robert Smithson, two great twentieth-century thinkers who renounced their Judaism and Catholicism, respectively. Freud and Smithson’s ideas have been incredibly important to modern and contemporary artists, so each is given his own mini-exhibit within “The Way of the Shovel.” Roelstraete apologized at the media preview for his muses being “dead white men,” but the entire show is devoted to Western art, ideas and histories, not Asian nor South American nor African ones. 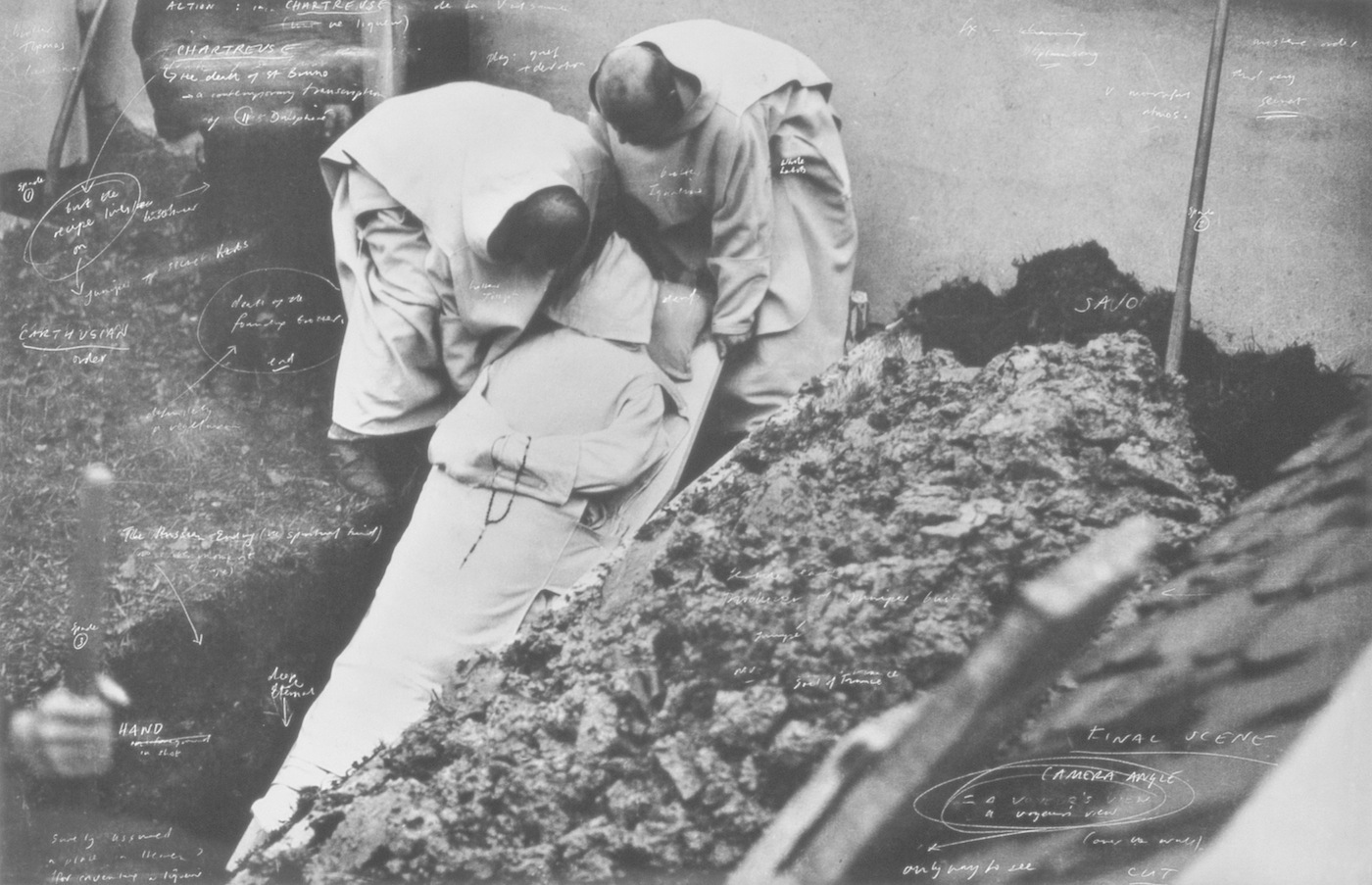 Tacita Dean, “The Life and Death of St Bruno” from “The Russian Ending,” 2001

Is the art-research tendency (the shoveling) “clearly a predominately, if not overwhelmingly, European affair,” as Roelstraete wrote in his catalogue essay? I think Chicagoans are up to speed on the topic. Go into any art school offering an MFA today (greater Chicago has six of these) and you’ll hear the best instructors talking about research as an art-making tool. And, we’ve had Willem de Kooning’s “Excavation” painting here (at the AIC) since 1952. The MCA’s exhibition, and the tool it describes, is actually boundless; its parameters are gigantic and concepts older and more pervasive than the show presumes, which is a good thing, as it provides an opportunity to question if the art world needs more intellectual art queries and less sensational, entertaining fluff. 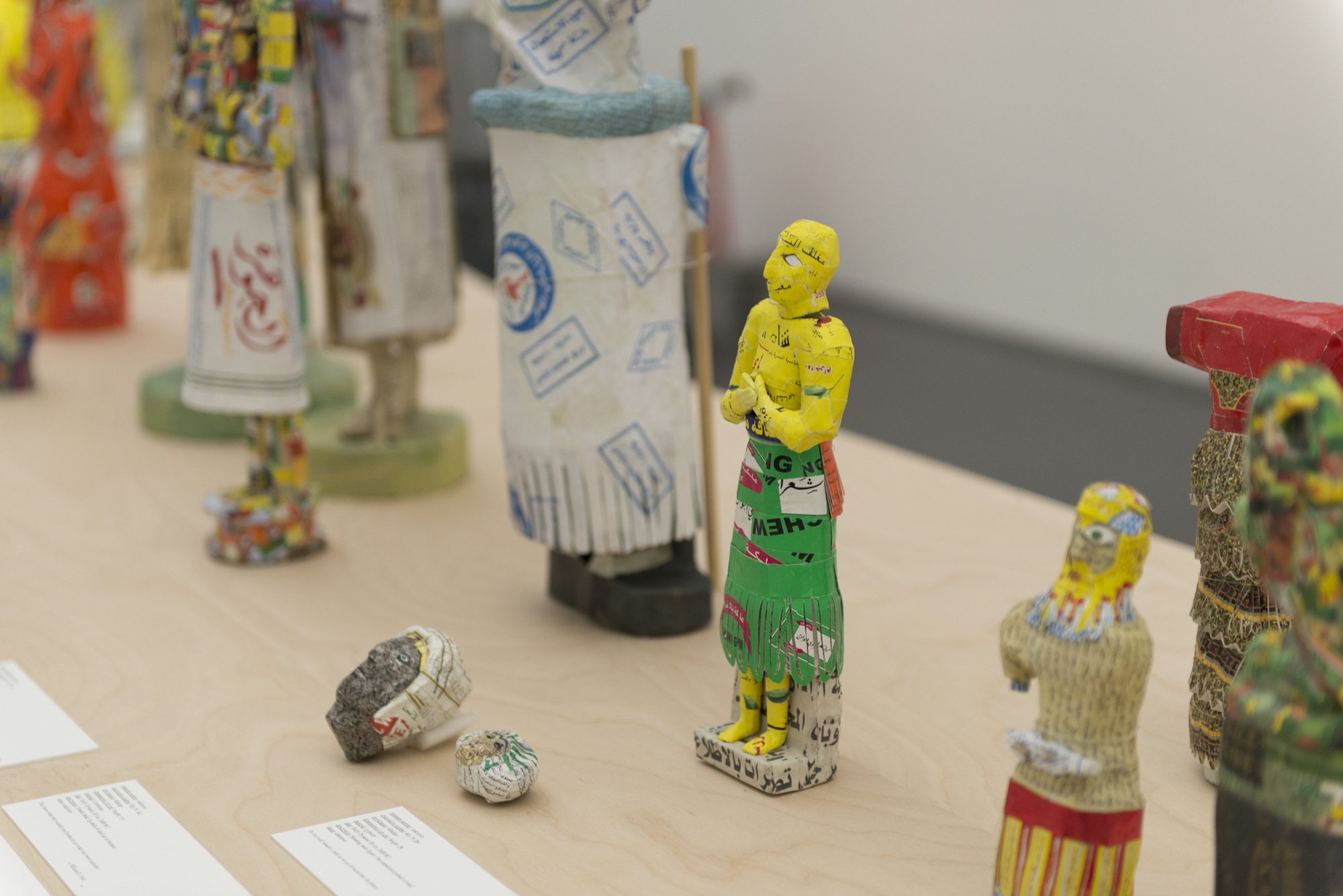 Michael Rakowitz, “The Invisible Enemy Should Not Exist” (detail), 2007-present

Do artists tell history well? Yes and no. They tell it with a slant, as we’d expect them to. If artists are historians, as this show proposes, then they are more akin to bloggers than journalists—they are passionate but could use editors; they are busy shuffling around secondhand info when they should be out interviewing people. The most relevant aspects of the show make use of archival materials. This is a burgeoning practice in the art world. See, for instance, Chicago’s Public Collectors (but not in this show), or the nearby Museum of Contemporary Photography’s exhibition coming early next year, called “Archive State.” 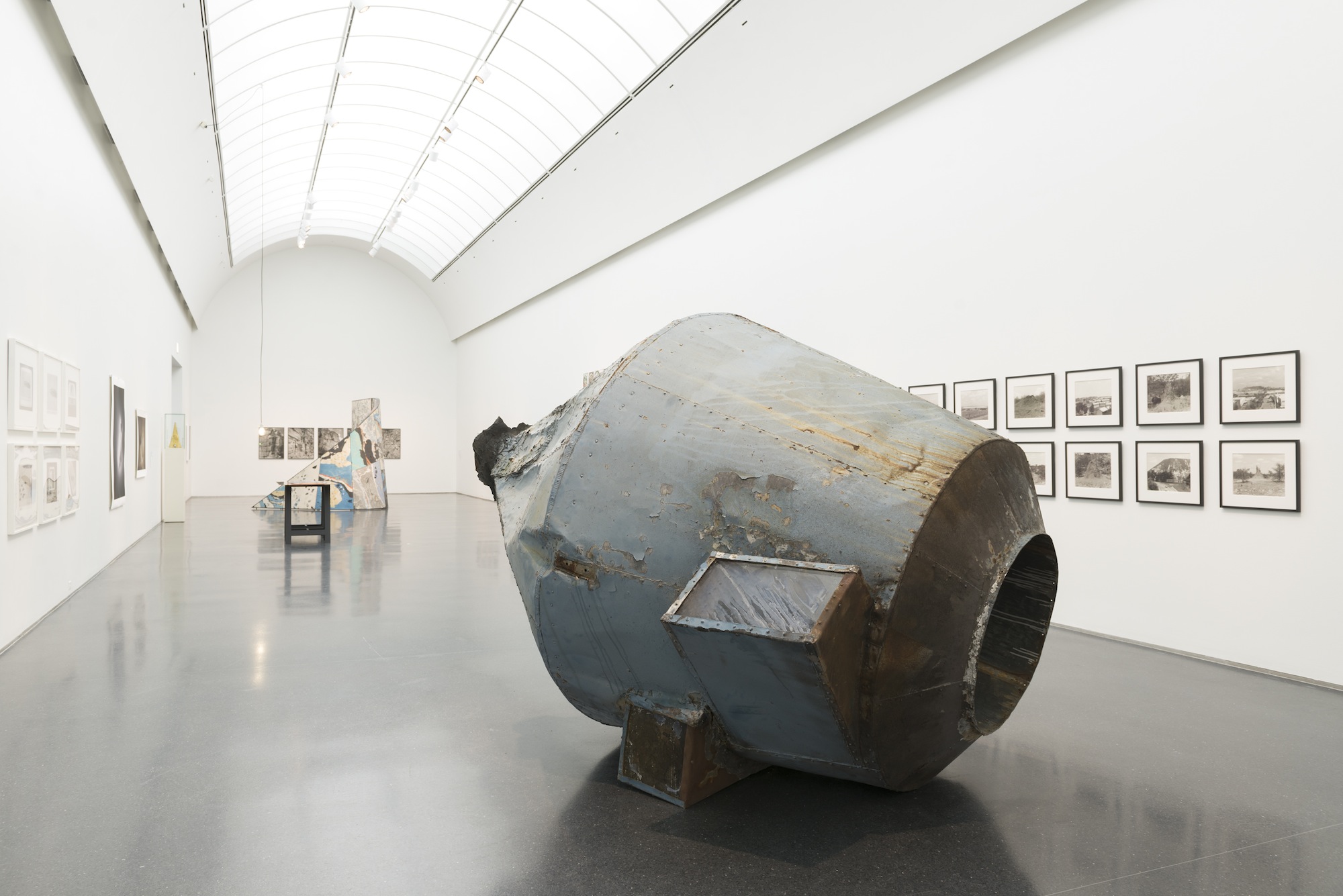 Installation view, “The Way of the Shovel: Art as Archaeology.” Foreground: Scott Hocking

Ultimately, “The Way of the Shovel” advances an idea about how artists make, not what they make. I interpret shoveling as physical labor, but the exhibition could have considered this aspect more in depth, especially in Chicago, where artists use materials and skills with respect to historical implications (not the other way around), or in respect to labor, activist and social justice experiences. This is, I think, what Carolyn Christov-Bakargiev (visiting professor at Northwestern) means when she says “matter matters.” Chicago’s most contemporary art is, on one hand, deeply invested in the material histories of crafted objects, and on the other hand invested in activist and social justice art. “The Way of the Shovel” isn’t exactly within that same spectrum—it lingers a little too long around ruins and graves—but it is insightful to know how they’re doing it across the pond.

“The Way of the Shovel: Art as Archaeology” runs through March 9 at the Museum of Contemporary Art, 220 East Chicago.