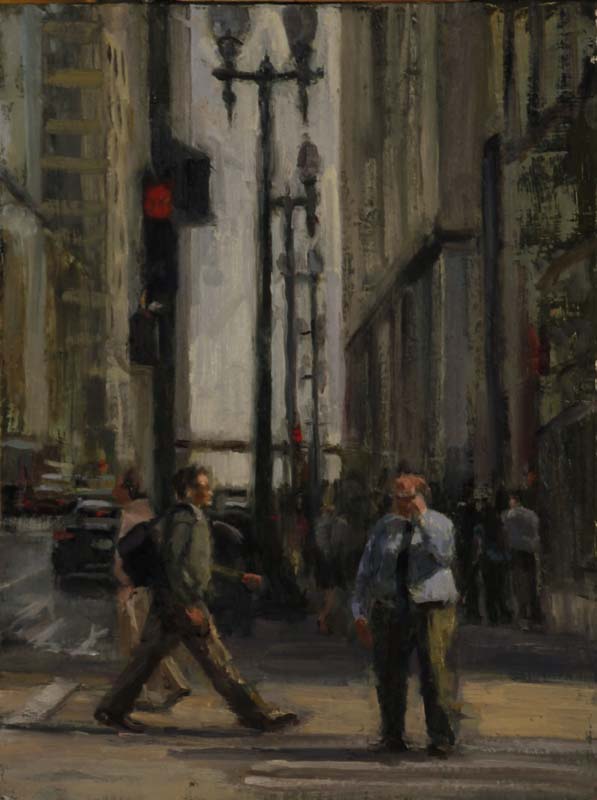 There’s something rough and persistent about the cityscapes of Errol Jacobson that mirrors his own life in Chicago, and his many careers as pool shark, entrepreneur of women’s shoes and creator of custom welded furniture. Any city street or monument may become the subject of his painting. Some of them are done on-site, but the best ones were made from photos shot through his car’s front window as he drove through the city working his current job as an independent real estate appraiser. Often the shots were taken at night, often it was raining, and usually the car window was dirty—but he manages to pull it all together as he pushes the oil paint into a compelling vision. There’s always a strong sense of where he is going with no particular attention to peripheral details. And always there’s a sense of hustle—whether by cars on the dingy streets, or by the pedestrians hurrying across them. Since Jacobson never attended an accredited art school or focused on a career in art, he might be considered an accidental artist, but he doesn’t live at the margins of society, and he has sought instruction consistently, if intermittently, over the past thirty years. Sometimes life got in the way. His paintings are the kind of gritty urban realism that characterized Chicago painters in the 1930s and forties. There’s a sense that the city is ominous, but the people are indomitable. (Chris Miller)

Through December 8 at Palette and Chisel Academy, 1012 North Dearborn.