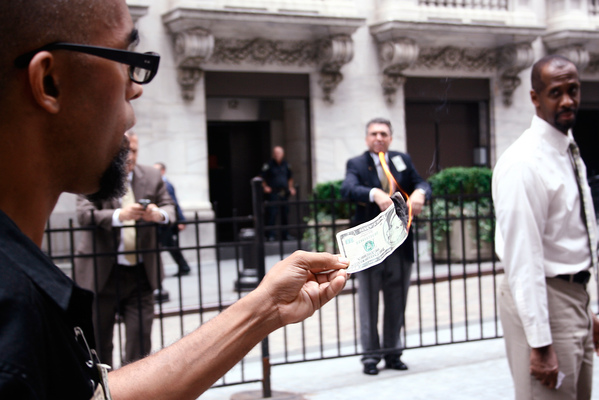 The sound of the artist Dread Scott chanting “money to burn—money to burn” in a rhythmic cadence accompanies the visitor for the duration of their visit to the group exhibition “It’s the Political Economy, Stupid.” It is the soundtrack to a recorded performance in which Scott offered passersby on Wall Street the opportunity to actually burn bills, which were affixed to the artist’s body. The curators were wise to carry Scott’s singsong cry through the entire show. It is a vaguely irrational and simultaneously reassuring aural message.

“Money to Burn” is one of more than ten videos in this diverse collection of work interrogating what the organizers of the exhibition, Gregory Sholette and Oliver Ressler, call “our present day circumstances of unrelenting economic crisis, authoritarian drift and rapidly failing states.”

A catalogue of techniques, from talking heads to animation, lures viewers into various understandings of how capital works: why banks and economies collapse, resistance to austerity and a variety of political critiques of what most contributors to the exhibit see as floundering systems.

Two of the most dramatic videos use dance to express the failed relationships between the body politic and the abstractions of late capitalism. “Body versus Capital,” 2011, by the Spanish collective flo6x8 is a forty-minute video of interventions by Flamenco performers, solitary or in groups, into banks in Seville. The urgent movements and plangent voices specific to Flamenco articulate the pain and frustration of people whose lives have been aversely affected by the borrowing and lending which has crippled the Spanish economy. The videographers also capture the reactions of the people in the banks to the disruptions of the dancers. 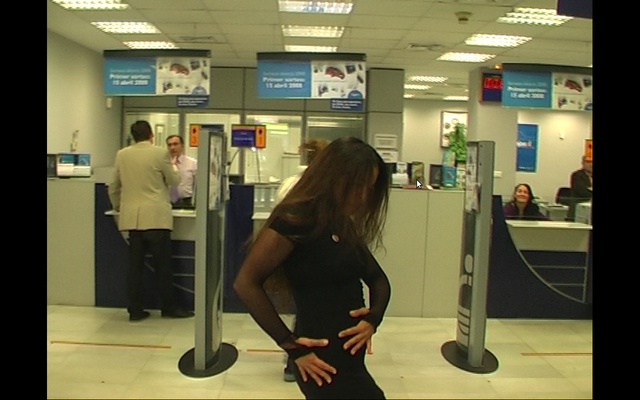 Isa Rosenberger’s “Espiral—A Dance of Death in Eight Scenes,” 2011–12, recreates a solo performance from The Green Table, choreographed in 1932, to record the collapse of the Weimar Creditanstalt. The dancer, Amanda Pina from Chile, whose face and body are painted so that she looks like an abstract expressionist skeleton, is filmed in front of the Austrian National Bank, reminding us of the treacherous potential for connections between politics and economics. A scroll, explaining the consequences of foreign investments, bisects the image and adds another layer of meaning to the powerful, angular dance, while interviews and historic footage provide background.

Despite the universal nature of dance and the innately compelling images of movement, these dances embody local cultural knowledge at risk of disappearing in the placeless calculations made by the demands of capital as it flows through the European Union.

“It’s the Political Economy, Stupid” functions as a kind of dynamic study center where any flummoxed member of the new precariat who wants to catch up on the global economic crisis and possibilities for resistance can spend a productive afternoon. (Janina Ciezadlo)