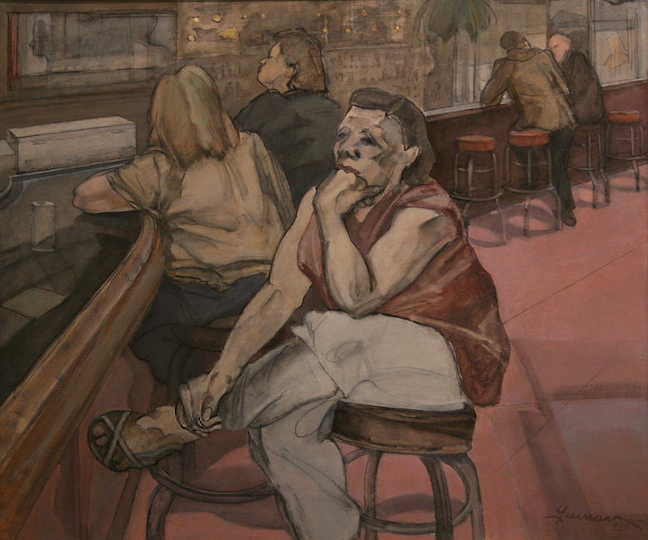 “To Live by Night” invites comparison between two very different visions of night: the acrylic-on-canvas paintings of Robert Guinan, and the charcoal-on-paper drawings of Mary Livoni.

Guinan is a great action painter—not the action of an arm wielding a brush, but the narrative action of his subjects, depicted with strong, dynamic contour lines. The subject, often a nightclub entertainer or habitué, goes directly onto the canvas, but the thin paint and dusty colors suggest that we’re looking at memories rather than at the actual scene. What’s remarkable is that these memories feel so alive, even though some of them must date back to the artist’s youth. Flashes of bright color bring the feelings into the present, while the grayish backgrounds push them back into the past. Though sketchy, the surrounding pictorial space feels complex and real. The artist, having found some moments in his life to be intriguing, now lives comfortably with his memories of them. 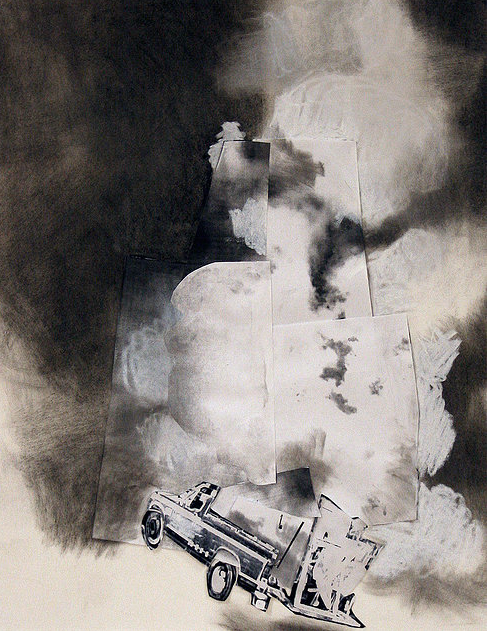 Livoni seems to be living closer to the edge of anxiety than Guinan, where certain views of the city, simplified by memory or dim evening light, provoke thoughts of love lost, love gained, abandonment or longing. One recurring image is a rambling, over-stuffed junk truck, or the scrappers that roam our city’s alleys. Other recurring images are the heavy, looming, geo-form structures of ugly but sturdy, old-fashioned Chicago bridges. And behind it all are visions of the evening sky, where the clouds are black instead of white, a full moon hovering behind them. It’s the dark, romantic setting that must be haunting her dreams. Several of Livoni’s pieces feel like experiments with one component or another. But when she pulls them together, as in the title piece for this exhibit,  “To live by night,” the results are riveting. (Chris Miller)